Libertarianism is, fundamentally, an other-regarding philosophy that emphasizes our obligations to refrain from dominating others and from imposing our vision of the good life on them. 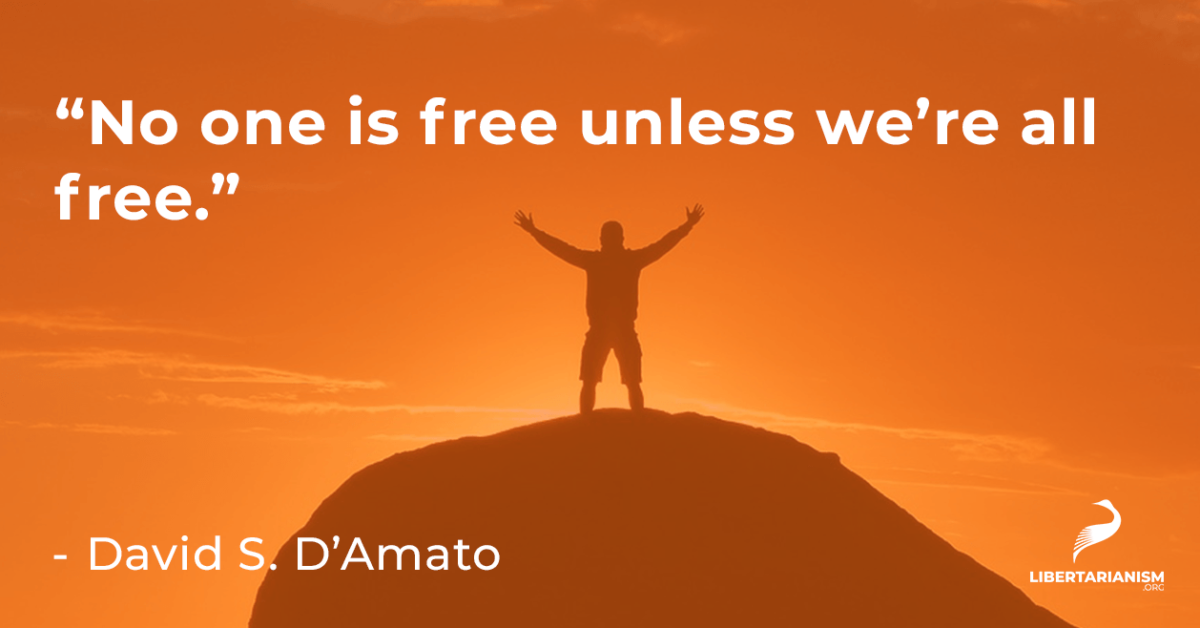 A common trope in criticisms of libertarianism says that it amounts to a celebration of selfishness and greed. The libertarian hero, according to this story, is the heartless miser who, having amassed a fortune, turns to the poor and says, “Screw you. I got mine.” This perception, found often among libertarianism’s left-leaning critics, is partly attributable to the fact that one Ayn Rand actually did come out as openly trumpeting, in a 1964 collection of essays and elsewhere, The Virtue of Selfishness. First, Ayn Rand’s definition of selfishness was, as she acknowledged herself, “not what is meant conventionally.” She built her arguments in favor of selfishness from a deliberately idiosyncratic and counterintuitive definition contrary to both everyday usage and dictionary definitions; she knew she was being antagonistic and courting controversy, and that’s exactly why she set forth her argument as a vindication of selfishness.1 That acknowledgment—which appears at the very start of the volume’s introduction—notwithstanding, Rand still insists that she is merely applying the dictionary definition of selfishness: “concern with one’s own interests.” But Rand was missing a key piece of most dictionary definitions, which define selfishness not just in terms of one’s concern with her own interests, but also in terms of a lack of consideration or regard for other people. This prong is, as it turns out, important—both generally and to our discussion here of whether libertarianism can be associated accurately with selfishness.

Libertarianism entails a principled modesty, suggesting that we should not be so sure of our values that we seek to impose them coercively on our fellow human beings. In an important sense, then, the libertarian idea epitomizes the rejection of selfishness, its central worry being that some people will use others as mere means to their ends, which entails selfishness of the very worst kind. Libertarians regard each individual as important and worthy of dignity and autonomy, as possessed of rights that ought to be protected against violent ingress. Historical libertarianism has been a reaction against the naked, unaccountable selfishness of power and privilege, a fundamentally egalitarian idea that says all people are equal in the sense that quite regardless of differences of ability, pigmentation, sex, gender, and ethnic or language group, we all have the right to be free and pursue our own idea of the good life. This is a both a radical idea and an expression of common sense, but it is not one that can reasonably or plausibly be defined as selfish. It says no one is free unless we’re all free.

Selfishness is the arrogant belief that you know better and that you have the right to force others to live according to your arbitrary dictates. Perhaps Oscar Wilde put it best in The Soul of Man Under Socialism when he wrote, “Selfishness is not living as one wishes to live, it is asking others to live as one wishes to live. And unselfishness is letting other people’s lives alone, not interfering with them. Selfishness always aims at creating around it an absolute uniformity of type. Unselfishness recognizes infinite variety of type as a delightful thing, accepts it, acquiesces in it, enjoys it.” The arrogance and complacency of the belief that you know better than others how they ought to behave is a serious problem in and of itself—that is, apart from joining to it the dangerous belief that you also have the right, really the responsibility, to use violence to get your way. As obviously wrong as this belief is, in politics, it is the norm. Libertarians are dismissed as childish and selfish for pointing out, using what are really rather uncontroversial ethical analyses, that this is the wrong way to treat other people and to think about their choices. We teach children that hitting and threatening other people is not an appropriate way to go about getting what you want, yet we build entire social structures on the idea that this is not only acceptable behavior but the best way to organize society. Libertarians merely ask why you think you have it within your rights to violate the rights of others, humbly submitting that we should default to treating others as free co-equals, not instruments that exist to help us get what we want. Libertarians sometimes call this the law of equal freedom: people deserve—by no more than being people—to be free to do whatever they will just as long as they leave everyone else free in the same way. People who believe that the state ought to deploy armed men to enforce their version of morality are exhibiting overconfidence in the superiority of their beliefs. This overconfidence makes them dangerous, prone to overreach and abuses of power in the service of the One Truth. And we all tend to be very sure of our own truths. As John Stuart Mill notes, “[F]ew think it necessary to take any precautions against their own fallibility, or admit the supposition that any opinion, of which they feel very certain, may be one of the examples of the error to which they acknowledge themselves to be liable.” Libertarians celebrate diversity of opinion and lifestyle; this position provides a hedge against the ascendancy of the One Truth, limiting its destructive potential.

Assuming that libertarians are selfish is an instance of assuming bad faith, an intellectually lazy and unfair way for one to escape an obligation to consider a position on its merits. But while the libertarianism-as-base-selfishness critique is based on an uncharitable and inaccurate reading of libertarianism and its motivations, we shouldn’t necessarily respond in kind. Progressives, social democrats, socialists, and other strongly pro-government segments of the left are probably not supporting government out of a desire to domineer and control,2 even if this is the inevitable upshot of expanding government’s role in our lives. Rather these groups tend mistakenly to see the state as a benevolent social force, concerned to protect and provide for society’s most vulnerable and disadvantaged. They are, of course, fundamentally wrong about the state—what it is, how it behaves, the empirical results of its actions, etc. The means to which these quarters of the left are wedded do not, as a matter of fact, produce the desired and expected results. They instead produce poverty and misery, where the libertarian principles of individual rights, genuine free market competition, and private property produce widespread prosperity and encourage generosity and social trust. Libertarianism is, in short, demonstrably the clearest, straightest, best path to those of the left’s goals that are worthwhile: ensuring that the greatest possible number of people worldwide have access to the basic necessities of life and opening the way to economic opportunity and security for society’s worst off. From an instrumental perspective, those whose stated public policy goals include growing the state, limiting free trade (both domestically and internationally), and increasing the weight of the tax and regulatory burdens are the great enemies of the poor and downtrodden; they’re actively holding back the mechanisms that create and distribute wealth. Thus, as Jason Brennan observes in Libertarianism: What Everyone Needs to Know, when libertarians criticize the welfare state, for instance, it is not due to their “callous indifference to the plight of the poor,” but “because they believe the welfare state hurts the poor more than it helps them.” Political dialogue frequently (really almost always) elides or confuses questions of means and ends, assuming that policies and institutions apparently designed to help the poor simply work the way their advocates say they work.

Admittedly, libertarianism is (or at least ought to be) fundamentally about means, placing breaches of the individual’s legitimate sphere of autonomy outside the realm of acceptable behavior—quite regardless of the ends after which one seeks. “I have often said,” writes Gandhi, “that if one takes care of the means, the end will take care of itself.” Gandhi said this in arguing for nonviolence as a practical road to national independence, but libertarians accept a broader and more principled application of this idea. Again following Gandhi, libertarians admit that “[w]e do not know our goal,” that the goal is the adoption of the proper means and is therefore “determined not by our definitions but by our acts.” Libertarians endeavor to treat other people in a particular way—respectfully and well—and we think that this makes a much better political program than the various modes of authoritarianism that have scarred history (it is, granted, a very low bar). Those who see in libertarianism only a reflection or after-the-fact rationalization of selfishness understand very little about it either its history or the family of philosophical positions that characterize it. Libertarians argue that it is just fine to look after yourself and pursue your interests, but that your actions in this pursuit are bounded by a social reciprocity, an acknowledgement of others and their inherent value as people.