“[S]chools don’t really teach anything except how to obey orders.” 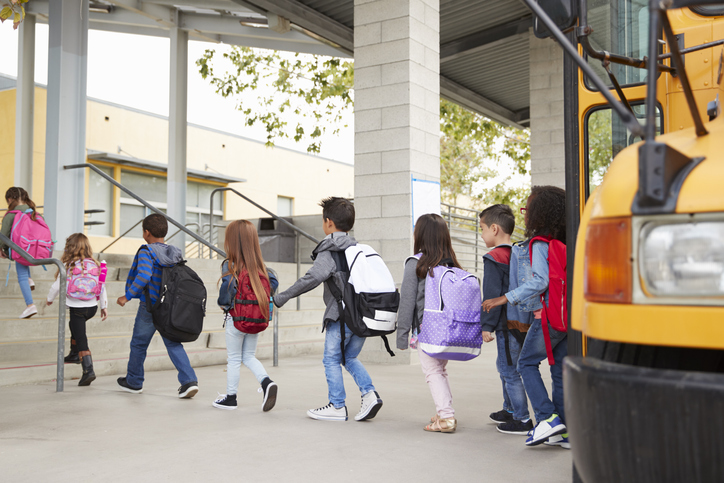 Libertarian perspectives on education are important particularly insofar as both the necessity and historical inevitability of compulsory, state-run schooling are today simply taken for granted by almost everyone, regardless of political affiliation or philosophy. In taking this system for granted, its proponents have given credibility to the insidious notion that it is somehow non-ideological, or ideologically neutral, or occupying a space somehow “outside” of ideology. It is not. Rather, compulsory, state-run schooling is heavily laden with controversial and indeed authoritarian ideological commitments and balanced on a series of tendentious premises. Much of this ideological foundation was “invented by the state when it began a new programme of social control through mass compulsory education.”1 Rather than undertaking to trace the history of compulsory government schooling, here we will be concerned with this: the ideological content of this system, and its important role as a means of social control.

“School,” writes John Taylor Gatto in Dumbing Us Down: The Hidden Curriculum of Compulsory Schooling, “is a twelve-year jail sentence where bad habits are the only curriculum truly learned.” Gatto identifies seven universal lessons that “constitute a national curriculum”: confusion, class position, indifference, emotional dependency, intellectual dependency, conditional self-esteem, and surveillance. Gatto, himself an award-winning schoolteacher, is famous for arguing that schools, quite contrary to popular belief, are designed to retard the process of genuine education by frustrating students’ natural curiosities, inculcating a self-destructive dependence on supposed superiors, and promoting the unnatural sequestration of the old and the young, among other things. Gatto confronts his reader with a disturbing truth: “that schools don’t really teach anything except how to obey orders.” And priming the student to meekly acquiesce to those in command may well be the primary function of government schools.

Compulsory schooling, mandated and run by the government, was and remains a distinctly martial phenomenon—which is to say that it is justified, if at all, on military grounds and maintains the characteristic features of military regimentation. In urging authorities to institute compulsory schooling, Martin Luther contended that if government has the power to conscript people into military service, then surely it has the right and the obligation to compel schooling. Cultural anthropologist Ayşe Gül Altınay observes the importance of universal compulsory military service and universal compulsory education in the “early years of nation-state formation,” as well as the “close link in the way these two institutions were perceived.”2 Just as the military was regarded as a school, so did the government school take on “a nationalizing and militarizing role.” If the citizens of the modern nation-state, this new, all-embracing institution, were to be properly “filled with a military spirit in time of peace,” then universal compulsory education would have to be at the heart of this project, for the psychological predicates of such a spirit require constant and careful tuning.3 American government schools unleash a barrage of propaganda on students from kindergarten on, compelling children to sing patriotic songs, to pledge allegiance to the flag,4 and to learn war-sanctifying myths about the U.S. government’s role in the world. In so subjecting children, we are, as Tolstoy said, “debauching them in our patriotism,” poisoning their impressionable minds against, and ruling out the possibility of, peace. The citizen the modern state seeks to create, if it can, is one who will accept and carry out without question even the cruelest, most inhumane orders. Because conscience and capacity for critical thinking are, of course, natural obstacles to the creation of such a citizen, they are the attributes to be extirpated by government schooling.

It is probably no coincidence that John Dewey, one of the great apostles of compulsory government schooling, also confidently trumpeted “the social possibilities of war,” seeing in it, as did so many progressives of the time, a path to comprehensive social transformation, to be helmed, of course, by qualified experts.5 Through the infrastructure and social regimentation of war, the state could control the economy for the public benefit. War would, he argued, “throw[] into relief the public aspect of every social enterprise,”6  harnessing science for the common good by accelerating the “systematic utilization of the scientific expert.”7 Dewey’s authoritarian political philosophy assumed social control and then skipped ahead the question of “what kind of social control was desirable and for what ends.”8 In Democracy and Education, Dewey correctly notes that “the movement for a state-supported education” coincided with the rising tide of nationalism in Europe. Still sore and tending to their wounds following the Napoleonic Wars, the German territories turned to state-provided education, making it central to the goal of developing “the patriotic citizen and soldier,” loyal to the national state. Rather than attending to the personal development of the individual, government education would be “a process of disciplinary training.” The individual would be subordinate, absorbed in “the ‘organic’ character of the state.”

Dewey and similar progressive champions of comprehensive, authoritarian social control have been the subjects of much-needed historical revision. Influential historian Michael Katz, for example, noted the “darker side to the social thought” of progressives like Dewey, citing “subtle and sophisticated” attempts to foster social control and manipulation. Charles A. Tesconi and Van Cleve Morris argue that Dewey represents an “ideology [that] leads to the type of homogeneity necessary to bureautechnocracy and contributes to the decline of the person.” Progressive reformers were famously contemptuous of immigrants, their cultures and religious practices; they advocated not only compulsory schooling but mandatory attendance in government schools, attempting to outlaw attendance in private or religious schools, which provided havens for minority cultures and religions. Compulsory schooling would prove a powerful and useful tool in the hands of the modern state, cultivating a uniform language and culture by coercively eradicating alternatives. One of compulsory schooling’s primary purposes has been to inure the young early and often to strict regimentation and authoritarianism, to root out the very kind of natural inquisitiveness that leads to learning. Libertarian education theorists, on the other hand, have tended to emphasize the collaborative participation of the student, concerned to avoid impeding the spirit of excitement and inquisitiveness that leads to comprehension of a deep and lasting kind.9 It is precisely difference and experimentation that the government schooling bureaucracy is designed to preclude. As Paul Goodman argued in Compulsory Miseducation, the more we get of formal schooling under present conditions, the less education we will get, with an “invested intellectual class” doing “positive damage to the young.” Goodman suggests (what is radical but perhaps should not be) that even the complete absence of school should be preferred to the “intrinsically worthless and spirit-breaking” government schooling status quo.

The work of Max Stirner anticipates many of the arguments in favor of active, self-directed learning, as opposed to pedagogical approaches that treat the student as the passive recipient of the teacher’s knowledge and expertise. For Stirner, education as it exists is fundamentally manipulative, “calculated to produce feelings in us, instead of leaving their production to ourselves however they may turn out.” As Stirner scholar John F. Welsh explains, Stirner sees education (and the process of socialization more generally) as teaching self-renunciation, as inverting the relationship between the individual and the object of his studies; rather than dissecting and digesting the object “as an active subject,” the individual is relegated to a position of passivity, made inferior to something external and alien to him. The liberal and proto-anarchist William Godwin propounded a similar view in his criticism of Rousseau’s theory of education: “[Rousseau’s] whole system of education is a series of tricks, a puppet-show exhibition, of which the master holds the wires, and the scholar is never to suspect in what manner they are moved.” Godwin argues in his Enquiry Concerning Political Justice that a compulsory government-owned and -operated education system should be opposed “on account of its obvious alliance with national government,” which alliance he sees as more formidable and dangerous even than the old alliance of church and state. For Godwin, a state education apparatus will inevitably serve to fortify old prejudices, to encourage and solidify mindless deference to entrenched institutions (and, he says, men in handsome coats). Godwin furthermore worries that reliance on the state for their education will put people in a position of “perpetual pupillage,” imparting the dependent mentality of a child who must be looked after. We should instead “incite men to act for themselves.”

Writing in 1937, M.L. Jacks, Director of Oxford University’s Department of Education, remarked on “the progressive assumption by the State of a parent’s responsibilities,” where the school is no longer a place in which lessons are to be learned, but in which life is to be lived. The teacher, here, is not in the place of the parent; he is rather himself the parent. Today, it is difficult to imagine a group more contemptuous of parents and the parent-child relationship than government teachers’ unions. Merely to suggest the idea that parents ought to have meaningful choices as regards the education of their children is to invite the asperity of government school teachers. The very notion of choice is received as a personal insult; why this should be the case is not at all clear, unless of course teachers believe that they should not have to compete, that competition is beneath them and parents should simply accept, in quiet submission, the school to which the government and their ZIP code assign them. How very ungrateful of parents to want to compare service providers, as they would in any other context. Teachers unions have effectively insulated government schools from the assessments or feedback of parents, hindering at every opportunity the chance to introduce choice and accountability. This posture of hostility to the voice of parents is much less about uniquely evil motives than it is about concrete material incentives: when interest groups are allowed to use public policy and the law to protect themselves from the pressures of competition, they will do just that. Concerned observers can hardly fault them, but we can and should criticize the perverse system of incentives that leads to such dismal results for parents and students. Allowing parents some meaningful choice in education is thought dangerous and impermissible because it undermines the state’s monopoly control over the process, curricula, personnel, and the buildings themselves. Subjects simply are not supposed to have the temerity to question the state’s prerogative to be at the center of education delivery.

In the education debate, as in others, libertarians are frequently treated by the “reasonable center” as unserious, bewitched by a radical ideology and so incapable of understanding or making serious policy arguments. If historians and other scholars have acknowledged the dark ideological underpinnings of the government education system, politicians and public policy professionals rarely do. An increase in popular understanding of this ideology of control and cultural homogeneity is important if libertarians are to turn people’s attention to voluntary and cooperative education alternatives.