Jordan Peterson is a Conservative, Not a Classical Liberal

by Megan Arnold and Kelly Wright 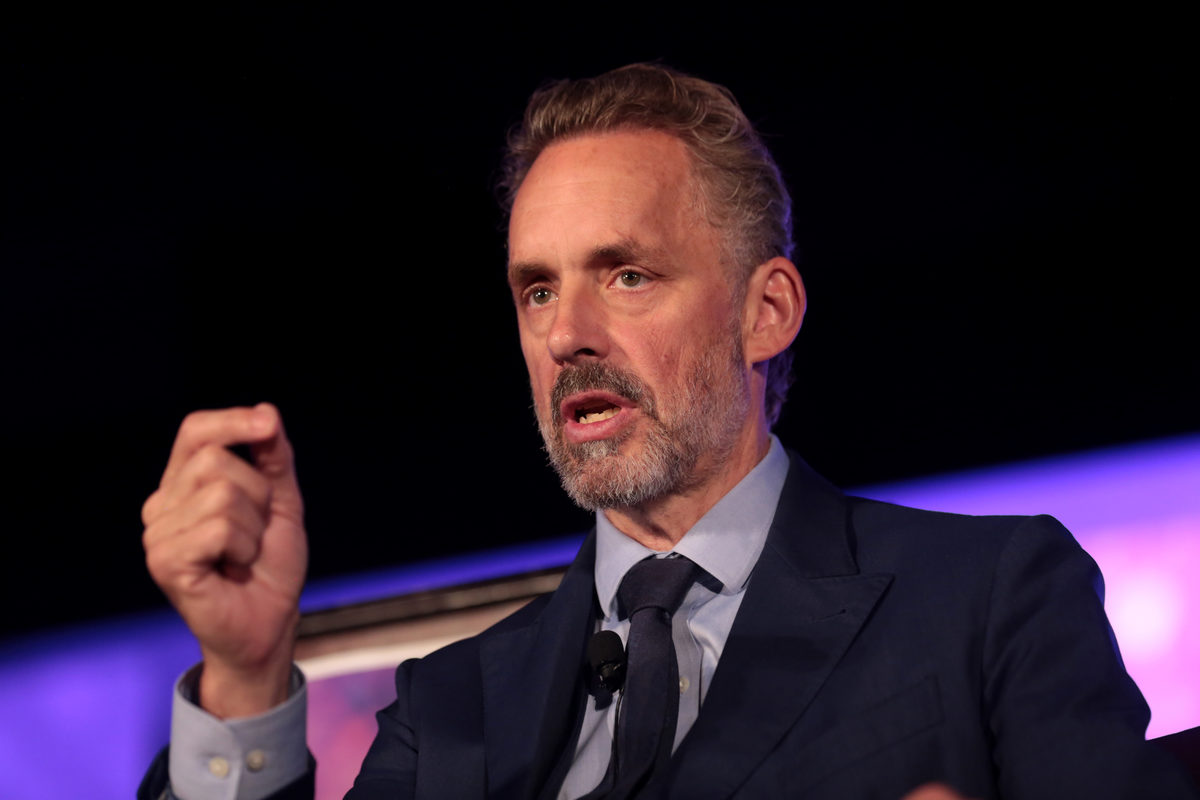 So unproductive has conservatism been in producing a general conception of how a social order is maintained that its modern votaries, in trying to construct a theoretical foundation, invariably find themselves appealing almost exclusively to authors who regarded themselves as liberal.

In speaking of the distinction between conservatives and [classical] liberals in his essay “Why I Am Not a Conservative,” Nobel laureate F.A. Hayek notes that “the conservative attitude is a fear of change” and “a timid distrust of the new as such.” By contrast, Hayek says that a liberal like himself can “accept changes without apprehension even though he does not know how the necessary adaptations will be brought about.” Conservatives only feel safe “if [they are] assured that some higher wisdom watches and supervises change.” It almost seems as though Hayek had Jordan Peterson in mind when he wrote the essay.

Hayek’s essay has become all the more relevant in today’s political landscape. Conservative populism has had a good few decades to resurface across much of the globe, notably in the United States and parts of Europe. This emergent new conservatism is characterized by its notably illiberal streak. Trumpism in the United States is marked by protectionism, xenophobia, nationalism, and a sense of pride in eschewing leftist Ivory-Tower intellectualism in favor of what these conservatives deem salt-of-the-earth common sense. Some have described this phenomenon as a reaction to the progressive politics of the Obama administration and a sense that the country and the economy have moved on from “middle America” and the average layman to the benefit of coastal “liberal” elites.

Who is Jordan Peterson?

Jordan Peterson has, not unexpectedly, found his moment in this political context. Peterson is the archetypical conservative described in Hayek’s essay. Peterson, currently a professor of psychology at the University of Toronto, was a privately practicing clinical psychologist before his rise to prominence in 2016 through his vocal opposition to a Canadian human rights bill that would extend workplace nondiscrimination protections to transgender Canadians. Peterson believed that this law would “compel speech” in that it would require him to use transgender individuals’ pronouns or face fines or jail time—an assessment with which Canadian legal experts disagree.

Peterson’s lectures (with over 30 million views on Youtube) take aim against what he calls “postmodern neo-Marxism.”1 Peterson believes this ideology has quietly permeated academia, government legislatures & bureaucracies, corporate human resource departments, and every other conceivable corner of society. He vehemently opposes “identity politics,” which he believes is “collectivist” and directly opposed to “Western” “individualist” society. Peterson draws a direct line connecting the Soviet Union and other authoritarian regimes to contemporary activists agitating for queer and trans rights. In his now infamous interview with Cathy Newman, Peterson claims that there’s no substantive difference between communist dictator Mao Zedong and contemporary trans activists because “[t]he philosophy that’s guiding their utterances is the same philosophy.”

The classical liberal tradition is a broad intellectual landscape without clear boundaries. Many distinct and even contradictory thinkers can be lumped under the classically liberal umbrella, but the intellectual tradition trends around some key ideas about human nature and human societies. The “classical liberalism” Peterson claims to offer to his audience can be found in more salient, concise, and consistent detail from past liberal thinkers like F.A. Hayek or Adam Smith. Moreover, much of what Peterson advocates in his lectures and books is in opposition to classical liberalism’s core tendencies, particularly Peterson’s belief that a lack of hierarchy and explicit rules results in chaos. After listening to Peterson’s lectures one comes away with the feeling that a lack of hierarchical order necessarily means that chaos abounds. This is a distinctly illiberal take if there ever was one.

In Adam Smith’s first book, A Theory of Moral Sentiments, Smith makes the case for a type of liberalism that seems to contravene much of Peterson’s self-styled “self-help advice.” Peterson seems to embody the worst strawman levelled against advocates of liberalism. Rather than viewing society as an aggregation of voluntarily associating individuals working together toward mutually advantageous ends, Peterson seems to view society through a lens of zero-sum atomistic individualism. Peterson encourages his audience to look inward for a sense of purpose, whereas Smith and other liberals envision a harmonious society where individuals enrich themselves through meeting the needs and desires of others. This process of creating value for others through positive-sum exchange is the backbone of any market economy, and a necessary ingredient for a society marked by liberal pluralism.

How selfish soever man may be supposed, there are evidently some principles in his nature, which interest him in the fortune of others, and render their happiness necessary to him, though he derives nothing from it except the pleasure of seeing it.

Unarmed in the Battle of Ideas

Peterson’s aggressive opposition to the monolithic, contemporary left is neither novel nor original. What makes Peterson worth engaging, apart from his viewership, is how he traffics in misrepresentations. He obfuscates the beliefs of his ideological opponents, like the so-called “postmodern neo-Marxists,” as well as masking his own conservative ethos by calling it “classically liberal.”

Hayek predicted as much in “Why I Am Not a Conservative.” Even today there are profoundly influential liberal scholars who contradict Peterson’s limited, illiberal worldview. Hayek again:

Conservatives feel instinctively that it is new ideas more than anything else that cause change. But, from its point of view rightly, conservatism fears new ideas because it has no distinctive principles of its own to oppose to them; and, by its distrust of theory and its lack of imagination concerning anything except that which experience has already proved, it deprives itself of the weapons needed in the struggle of ideas. Unlike liberalism with its fundamental belief in the long-range power of ideas, conservatism is bound by the stock of ideas inherited at a given time. And since it does not really believe in the power of argument, its last resort is generally a claim to superior wisdom, based on some self-arrogated superior quality.

Peterson comes across as opposed to “new ideas.” For instance he is intransigent regarding the idea that the categories of “man” and “woman” are hazy or at the very least not immutable. He argues that even attempting to discuss these ideas are indicative of an authoritarian regime lurking beneath the surface. Conversely, liberal champion and scholar Deirdre McCloskey cites innovation and the production of new ideas, or the discovery of “new ways of doing things,” as the keys to the modern world. McCloskey, an outspoken liberal, former Marxist, widely respected economic historian, and transgender woman2 has pointed to liberalizing ideas about gender and sexuality as signs of success as a result of the liberal order. Peterson decries egalitarian ideas, while McCloskey cites them as a success story of liberalism.

McCloskey cites “new ideas” as the key to the “Great Enrichment,” her name for the hockey stick-shaped explosion in wealth creation—and the consequent improvement in the human condition—since c. 1800. In an interview series for Learn Liberty, McCloskey specifically cited relaxed notions of gender roles as evidence of liberal victories, saying:

Juxtapose McCloskey’s defense of liberalism and toleration with Peterson-associate, conservative feminist Camille Paglia who points to the acceptance of gay and trans people as harbingers of cultural collapse:

Historically the movement toward androgyny occurs in late phases of culture, as a civilization is starting to unravel. You can find it again and again and again through history in Greek art. All of a sudden the sculptures of male athletes, which used to be all robust, all of a sudden begin to seem like a wet noodle. The people who live in such periods, in late phases of culture, feel as though they are very sophisticated and cosmopolitan. ‘Homosexuality, heterosexuality, so what?! Anything goes!’ But from the perspective of historical distance you can see that that’s a culture that no longer believes in itself.

As one might expect, Paglia and Peterson get along well. In one video where they interview each other Paglia gleefully nods along as Peterson explains that the reason men can’t control “crazy women” (his words) is because it’s no longer socially acceptable for men to use physical violence against them. Peterson and Paglia have deputized themselves as defenders of Western civilization against the scourge of transgender activists whom they believe are evidence of cultural decay. This is not liberalism. A society predicated on violently imposed conformity to particular social norms is exactly what liberalism has always challenged.

Peterson’s concerns about chaos amount to a fear of individual freedom. Much of Peterson’s scholarship emphasizes imposing order onto the chaos of life, but liberals don’t believe that chaos results from freedom. In fact, much of the liberal tradition centers around unplanned order that spontaneously emerges from free individuals voluntarily associating with one another.

Language, and culture more broadly, can be seen as the quintessential spontaneous orders described by past classical liberals like Hayek and Smith before him. The concept of spontaneous order is important to keep in mind in this context because Peterson’s entire schtick seems to be about warning people of life’s inevitable chaos and how we ought to embrace established hierarchies to impose order on chaos and make life livable. This seems incompatible with the classical liberal embrace of unplanned order.

Peterson and his fans will argue that they derive order from behaviors that have conferred evolutionary advantages to humans throughout history and prehistory, which constitute as such a bundle of examples of spontaneous order. What they fail to account for is how consciously adopting and perpetuating those myths and practices alters our paths forward as a species in a way that amounts to conscious design—even assuming we have perfect knowledge of what worked in the past and why. Evolution is not something that happened to our ancestors, led to us, and left us bound to recreate previously adaptive behaviors in perpetuity. The evolutionary insights that Peterson likes to point to encouraged our ancestors to live together in relatively large and complex groups. That is nice and important, to be sure, but as Deirdre McCloskey notes, it took more than ten thousand years after that happened for our species to begin innovating against abject poverty, slavery and serfdom, and the vagaries of the environment.

Peterson wants to preserve incumbent hierarchies qua their incumbency. In other words, Peterson is not an adversary of established norms, mores, or institutions but rather an effective defender of them. He appeals to myths and legends about Jungian archetypes to obscure his defense of what are already predominant ideas. In one word, Peterson is a conservative.

Fissionism: Why Libertarianism Should Extricate Itself from Conservative Entanglements, written by Grant Babcock

Megan Arnold is a writer currently based in Pennsylvania.

Kelly Wright is a writer and activist based in the Washington, D.C. area.