Samuel Johnson and His Dictionary

This is the second part of Smith’s discussion of how Samuel Johnson made a living as a free-lance writer in 18th century London. 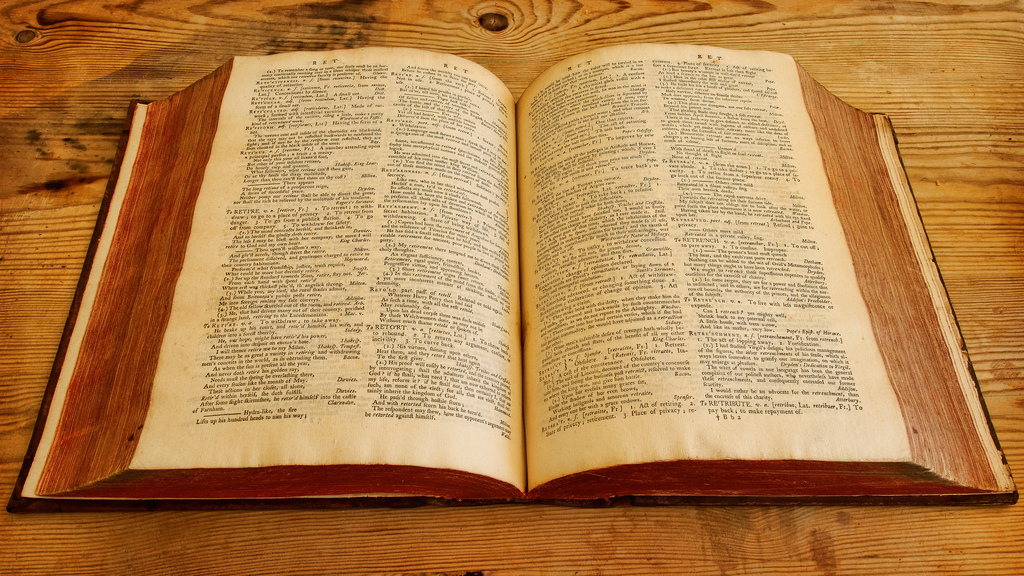 In February 1755, after Johnson had finally completed his massive and laborious Dictionary, he wrote one of the most celebrated letters in the annals of literature. The circumstances that occasioned this letter (which was addressed to Lord Chesterfield, his supposed patron) were as follows:

In 1747, Johnson published his Plan, or Prospectus, for A Dictionary of the English Language, an ambitious project that would turn out to be the most important and influential English dictionary ever published and Johnson’s chief claim to literary greatness. Johnson may have gotten the idea for this project some years earlier while visiting the bookshop of Robert Dodsley. After Mr. Dodsley casually remarked “that a Dictionary of the English Language would be a work that would be well received by the public,” Johnson initially seemed attracted by this suggestion but then dismissed it with the words, “I believe I shall not undertake it.” But the idea apparently took hold, for, as Johnson later told James Boswell, the plan for his Dictionary had “grown up in [my] mind insensibly,” with little conscious effort or attention on his part. (Johnson would later deny this story and claim that he had hit upon the idea for a dictionary several years before this conversation took place.)

A number of London booksellers combined their resources and offered to publish Johnson’s Dictionary. (This was during an age when booksellers frequently doubled as publishers; not until later did these two functions become specialized into separate and distinct occupations.)  These backers also offered to pay Johnson 1,575 pounds.  Although this sounds like a considerable sum for the time, this was a project that Johnson predicted would take three years. (It took seven years instead — so much for the ability of even this most professional of writers to predict the most important deadline of his writing career.) Moreover, Johnson had to cover his expenses from this money, and these were considerable. For example, he hired six amanuenses (secretaries, in effect) to do the mechanical part of the work, and he had to pay for paper, which was expensive by the standards of the day.

Although a literate public was emerging in England (and elsewhere in Europe) at this time, and although some writers found it possible to make a living solely by selling their wares to this public rather than by relying on patrons, the patronage system was still an important source of revenue for many writers. Patrons, who were typically monarchs or noblemen with an interest in philosophy, science, and/or literature, would support a writer financially; and the writer would reciprocate by praising his generous patron in the dedication of his magnum opus. (Some of these dedications are so sickeningly deferential as to appear humorous to the modern reader – for example, the writing skills of a patron king might be likened to Cicero – but this was how the game was customarily played.)

Incidentally, it was a growing concern with the effects of patronage that often gave “hack” writers (or Grub Street writers, as they were sometimes called in London) a bad name. The derogatory label of “hack” sometimes denoted more than a writer for hire; it could also refer to a writer who was willing to trim his ideological sails to meet the demands of his patron. Thus, if you were told by your patron to defend the Walpole administration during the 1720s, then you wrote glowing testimonials on behalf of this munificent, wise, and far-sighted politician, regardless of what your own political beliefs might be. And, contrariwise, if you were told by your patron to attack the Walpole administration, then you wrote scathing attacks on this irredeemably corrupt tyrant, whatever your own political beliefs might be. And if you were told to defend Walpole on one occasion and to attack him on another occasion (depending on the changing political fortunes of your patron), then, as always, you did as you were told. A hack writer, like a lawyer defending his client, was a mouthpiece for his patron.

When David Hume, Voltaire, and other 18th Century philosophes (“men of letters”) claimed to prize independence above all else, and when some claimed they would rather live in poverty than be employed as a hack writer, they were objecting to what they perceived as the intellectual corruption inherent in the patronage system. As they saw the matter, a hack writer was a writer who sold his intellectual soul for a mess of porridge and to curry favor with the rich and powerful.  (I shall return to this subject later and discuss its application to Samuel Johnson, who would eventually receive a good deal of criticism for accepting a royal pension.)

Johnson was an experienced writer by the time he published the Prospectus for his Dictionary of the English Language, so he understood the value of obtaining a sympathetic patron. And it so happens that Philip Dormer, Earl of Chesterfield and one of the principal Secretaries of State, fancied himself an expert on the English language and an arbiter of good taste. Word had come to Johnson via the usual back channels – for no respectable patron would be gauche enough to say outright, “Praise me to the skies, and I will give you money” – that Lord Chesterfield was very interested in Johnson’s project. Thus did Johnson dedicate his Prospectus to the eminent Lord Chesterfield, praising him as an “authority in our language” who has “commissioned me to declare my own opinion….[T]he power which might have been denied to my own claim, will be readily allowed me as the delegate of your Lordship.”

Johnson did his part in the patronage game by giving credit to Lord Chesterfield where none was due, but what did he get in return? Nothing, absolutely nothing — not one red schilling during the seven stressful years that he worked on his masterpiece. Then, around one year before the Dictionary was to be published, Chesterfield published a glowing testimonial to Johnson’s talent, stating the he would gladly bow to Johnson as the new “dictator” of the English language. This praise, as Johnson clearly understood, was offered in the hope that Johnson would dedicate his Dictionary to Lord Chesterfield, just as he had the Prospectus seven years before. But Johnson, having received nothing from Chesterfield during those seven years, was no longer in the mood to play this courtly game.  Johnson told Boswell that the praise bestowed upon him by Chesterfield was “all false and hollow.” Chesterfield “had taken no notice of me” for many years, but now, “when my Dictionary was coming out, he fell a scribbling in The World about it.” Johnson then mentioned a letter he had written to Chesterfield, one written in “in civil terms” while making it clear that “I had done with him.” And this brings us to the celebrated letter mentioned earlier, which reads, in part:

Seven years, my Lord, have now past, since I waited in your outward rooms, or was repulsed from your door; during which time I have been pushing on my work through difficulties, of which it is useless to complain, and have brought it, at last, to the verge of publication, without one act of assistance, one word of encouragement, or one smile of favor. Such treatment I did not expect, for I never had a Patron before….

Is not a Patron, my Lord, one who looks with unconcern on a man struggling for life in the water, and, when he has reached ground, encumbers him with help?  The notice which you have been pleased to take of my labors, had it been early, had it been kind; but it has been delayed until I am indifferent, and cannot enjoy it; till I am solitary, and cannot impart it; till I am known, and do not want it. I hope it is no very cynical asperity not to confess obligations where no benefit has been received, or to be unwilling that the Public should consider me as owing that to a Patron, which Providence has enabled me to do for myself.

Johnson’s Dictionary (published in 1755) was a smashing success with readers and critics alike; it brought “great fame” but no additional money to our beleaguered writer, apart from the 1,575 pounds that he was originally paid (and most of this, as we have seen, was eaten up by expenses over a seven year period). Thus, while the booksellers who had financed this project were rejoicing at their good fortune, Johnson still needed “to make provision for the day that was passing over him.” Johnson was not bitter, however; indeed, when Boswell said, “I am sorry, Sir, you did not get more for your Dictionary,” Johnson replied: “I am sorry, too. But it was very well. The booksellers are generous, liberal-minded men.” Johnson went on to praise his bookselling financiers as patrons of literature who were well-deserving of any profits they might reap from his Dictionary: “it is to them that we owe its having been undertaken and carried through at the risk of great expense, for they were not absolutely sure of being indemnified.”