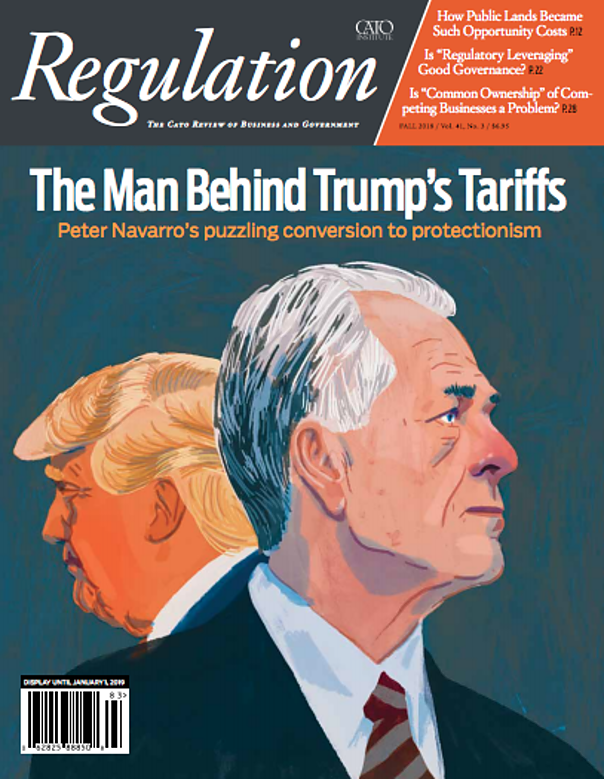 What percent of American consumer expenditures actually end up in China? Is trade to blame for the disappearing manufacturing jobs? Why does the federal government own so much land in the West?

Is Public Transportation Worth it? (with Peter Van Doren), Free Thoughts Podcast

[music] [00:00:00] Aaron Ross Powell: Hi. I’m Aaron Powell and today we’re back with another special bonus episode of Free Thoughts with fan favorite Peter Van Doren. Peters’s here to tell us about some of his favorite articles from the new issue of Regulation magazine for which he is the editor-in-chief. If you like what you hear you can check out Regulation online by heading to cato.org/regulation.

[00:00:27] Peter Van Doren: The first article I talk about is- its purpose is to help people at dinner parties talk about trade. Trade is a very difficult and challenging concept to talk about. I think if you’re outside the economics community, the standard position of, I won’t say most, but a standard neoclassical economics position is that unilateral free trade is first-best. It doesn’t matter what other countries do, whether they’re mean, nasty, protection is not protectionist whatever. Our first-best policy is to import whatever makes sense, and to export whatever makes sense and consumers are better off. This doesn’t— My charge to Pierre Lemieux the author of this article was this economics view of things doesn’t seem to fly very well in ordinary discourse so why don’t you discuss all the arguments against China and what it does, whether they are meaningful or not, and then give a perspective on how to discuss such arguments. He did that though in the context of analyzing Peter Navarro’s intellectual history and the transformation of that history. For those who don’t know, Peter Navarro is the head of the, let me get the name right here, the office of trade and manufacturing policy within the White House, which is the office within the White House that didn’t exist until President Trump created it. The first and only head of this office is Peter Navarro. He is a PhD trained economist from Harvard and his— The book review that Pierre Lemieux does in regulation discusses what he wrote in the ’80s and then how he’s changed so dramatically from that in his current position. I’ll give you just some stylized facts from that article but I urge people to read it to help them engage in better dinner party conversation about trade. First, I’ll ask Aaron, what percent of American consumer expenditures actually end up in China? In other words, that the payments on things we buy that, say, made in China and the the payments to factor suppliers for things that come from China that, in turn, are made in our components of US goods. What percent of US consumer expenditures actually, literally, physically, end up as dollars spent in China?

[00:03:07] Peter Van Doren: 1.9%, [laughs] so it’s not very much. Why are we having such an issue over Chinese trade and Pierre shrugs his head and he doesn’t know? It’s only 1.9% of consumer expenditures. Two-thirds of American consumption is domestic services. The point of this is, the point of his article is, manufacturing is so much more productive over time it just requires fewer and fewer people and fewer and fewer dollars. Most of what we do now is services for each other and those things—Some of them are traded, the US finance and insurance are traded goods. We’re very good at those and international markets. A lot of what people do for each other is domestic non-traded consumption, education, healthcare, things like that, real estate services. We need to ratchet down the rhetoric about trade and then Lemieux— The final fact I’ll provide is that manufacturing productivity increases over time have decreased employment. That’s if you want to think of why manufacturing prop up, employment keeps going down, the answer isn’t trade, it’s the increase productivity trade. Services are much more difficult to have productivity increases, and thus, all of us end up doing service kind of things rather than working manufacturing because we don’t need many people to do that. The second article, completely different topic, and I spoke about this at the staff meeting that you attended a couple of days ago and that is, why does the federal government owns so much land in the West? I’ve always wondered about this. I knew the East Coast had mostly private land and the West was federal. Yet we had the Homestead Act of 1862, which said, “The Louisiana purchase and all those lands that we’ve bought or conquered over time, we’re going to give those away to people. The federal government initially own them, but in fact, the United States is about private property. We’re not even going to charge you. We’re going to let people settle at the West.” They can get 160 acres and they put up stakes an. The movies showed us all about this, particularly, in Oklahoma. You could get 160 acres for free as long as you farm it, entitled it, and engaged in productive activity on it. What happened though, is that in the arid west, West of the 100th Meridian, 160 acres would not be economically viable. The lack of rainfall meant the crop yields were so low that it would produce insufficient food and/or income from cash crops to actually support a family. These 160-acre households out West failed and failed and failed. John Wesley Powell, the Powell dam in the West is named after him, an American geologist and surveyor of the West at the behest of Congress, reported back to Congress in 1879, that the acreage for homesteading West of the 100th meridian should be 2,600 acres, not 160. This recommendation ran into the buzzsaw of Populist, Jeffersonian Yeoman, farmer in America. The people would not have it. They said, “The dream of going west and then settling and getting a family farm was in jeopardy.” Congress declined to change the law. The problem is that these 160 acre homesteads were not economically viable so they all failed. Rather than enlarge and change how much land was given away at once, Congress then started to subsidize dams and water reclamation in the west to keep these little farms going. Timber mining and grazing needed hundreds of thousands of acres. The economies of scale of these things were immense, and it was so dry, you needed to rotate your cattle, particularly, for grazing. These activities, which is what made sense in the west, were made illegal in effect. You couldn’t do these things legally under the Homestead Act because you couldn’t acquire enough land to actually make them economically viable. In response, an Eastern Intellectual movement coming out of the Yale School of Forestry said, “We need government ownership and scientific management of the land,” and this was the response. Like many stories I tell in regulatory history, this is a classic one, which is we needed to change the way property rights were allocated in order to make sense, if you will. Because of cozy and transaction costs and government rules about you couldn’t acquire parcels big enough it was illegal to do so, and so the lawless west was born. The eastern intellectuals came up with an environmentally oriented stewardship as the answer, and guess what, we are still trapped in that rhetoric. The fight between the Bundys and grazing and the BLM that ended up with a person shot recently, all of that is the tragic result of you need thousands of acres to graze cattle and there was no legal way to get that. This article, I think, if you read anything about federal lands, this is nice one-stop shopping for that history. The third article I mentioned is a review I do in my working papers summaries of, a review of a paper about the stylized facts of mortgage defaults in the— We’re 10 years out now from the 2008 financial crisis. Again, I think the standard dinner party conversation says that there were misguided mortgages handed out and it was the fault of the companies. They didn’t judge people’s incomes. They just handed out money for houses willy-nilly, and that was really crazy and we need to stop that somehow. Again, I will put Aaron on the spot here and just— The paper I review examines the history of defaults among AAA rated mortgages, both prime and subprime, cumulative defaults from 1987 for mortgages issued 1987 through 2008, with defaults being measured up through 2013. This is in effect after allowing for the defaults to occur after the financial crisis. Again, these are AAA rated securitized mortgages, so-called mortgage-backed securities. Through 2013, what was the cumulative, not just after ‘08, but the default rate on everything MBS that had been issued since 1987 on the AAA rated mortgages as an as an entirety.

[00:10:52] Peter Van Doren: Correct. Give me what you think the dinner party answer would be? You don’t have to guess the right answer. You know where I’m heading.

[00:10:58] Aaron Ross Powell: I’m sure that the dinner party answer is probably quite high-

[00:11:09] Peter Van Doren: Correct. It’s 2.3%. That’s it. Now, how about subprime AAA? Now, you say, “What, there was subprime AAA?” Well, yes. Allegedly, that was part of the problem. It was the so-called overrating by the rating agencies of these markets that lulled investors into buying these things that were misinformed and misguided, et cetera. What was the cumulative default rate on subprime AAA mortgages issued ‘87 through 2008 measured through 2013?

[00:11:51] Peter Van Doren: 0.42%. Okay, just stunning. I read this paper and I said, “What?” I’ve been a sort of dissident on the standard story. Well, I do tend to be anyway. I dig for stuff to try to change the conversation. Subprime AAA mortgage the cumulative default rate 0.42%. The yield on these securities, just to give you a sense, if you bought a 10-year Treasury in 2008, the yield on those is anywhere between 2.5-3 something. The yield on these securities that I just mentioned through 2013 is 2.4% to 3.3%. The same as— When you think of AAA, you think of treasuries as the anchor? If these mortgages were as good as treasuries, then the yield on them should be as good as treasuries issued at the same time. The answer is the yields have been the same. Finally, the total cumulative losses in billions of dollars or trillions of dollars on these AAA rated mortgage backed securities through 2013 is— Sorry to put you on.

[00:13:07] Aaron Ross Powell: I don’t even know what order of magnitude your talking about here.

[00:13:10] Peter Van Doren: It’s $350 billion. It’s not that much. The S&L crisis was in real dollars probably greater, and the Obama Recovery Stimulus Act poured more into the economy than this loss. Anyway this paper is a head-scratcher. It just says, “Why are the stories of the financial crisis, why are they always about these misguided mortgage, when the actual losses on these mortgages don’t seem to be?” They’re not zero but they’re not what at the level that everyone thinks? [music]

[00:13:53] Aaron Ross Powell: Thank you, Peter. Free Thoughts, listeners, if you’d like to read any of these or other articles in Regulation, visit cato.org/regulation. Thanks for listening. Free Thoughts is produced by Tess Terrible. If you enjoyed today’s show, please rate and review us on iTunes. If you’d like to learn more about libertarianism, find us on the web at www.libertarianism.org.