The printing press acted as a catalyst for cohesion by creating a standard language. 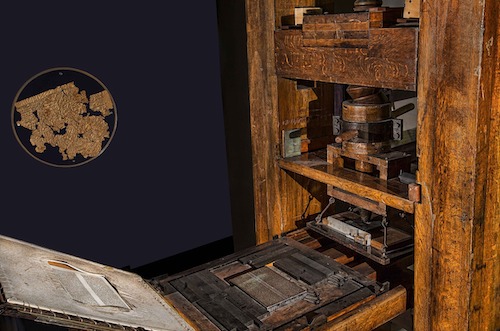 It would be hard to find anyone to disagree with the proposition that language has immense social impact. But Irish political scientist Benedict Anderson goes even further, arguing that language helped create the nation-state, nationalism, and modern society itself. In his book Imagined Communities:Reflections on the Origin and Spread of Nationalism (1983), Anderson coined the term “print capitalism” to describe his theory. In short, he believes that the invention of the Gutenberg Printing Press in 1454 standardized vernacular languages in Europe via the publishing entrepreneurs who wanted their books to reach the widest possible audience.

Previously, most people communicated via a welter of geographically specific dialects and most were illiterate. After the printing press, larger geographical units could be united around a shared language. For example, French gradually replaced regional languages like Breton, Burgundian, and Gascon, which then eased political and cultural divides between these regions. This allowed speakers of different dialects to interact more with each other. Thus, according to Anderson, the first European nation-states were formed on the basis of national print-languages. No one at the time could have imagined that mass market demand for book sales would have helped construct European nationalism, but that was the unintended outcome.

In order to understand the profound impact of the printing press on the rise of the nation state, it is important to first consider what exactly is a nation. According to Anderson, a nation “is an imagined political community - and imagined as both inherently limited and sovereign” since it has invisible boundaries. While many people in a nation will never meet, they share certain interests and goals which creates social cohesion.

The printing press acted as a catalyst for this sense of cohesion by creating a standard language. National communities could now form new relationships and establish a shared identity, something not as easily achievable prior to the birth of the printing press. In particular, Anderson writes, “Print-capitalism gave a new fixity to language, which in the long run helped to build that image of antiquity so central to the subjective idea of the nation.” Print-capitalism, mixed with linguistic homogeneity, strengthened the nascent nation-state in Early Modern Europe.

However, book-selling entrepreneurs were not intentionally trying to invent the nation state. They were simply taking advantage of a market opportunity. Prior to the printing press, a majority of books were printed in Latin, but only a small, educated elite could read that dead language. By contrast, growing numbers of the new urban middle classes were learning to read in these new national languages. By printing in languages rather than in Latin, book sellers could amass a wider potential audience. This had other salutary, unintended knock on effects. For example, fewer women than men knew Latin; and the language had also served as a barrier between the upper aristocratic and middling bourgeoisie classes. Thus the transition from Latin to vernacular publishing allowed for greater upward mobility for the previously excluded.

The Gutenberg printing press had such a monumental impact on the spread of vernacular languages due to the sheer volume of books printed. As historians Lucien Febvre and Henri-Jean Martin estimate in their book The Coming of the Book: The Impact of Printing 1450-1800, half century after Gutenberg’s innovation the number of books published in vernacular languages had grown from essentially zero to 23% of all books produced in Europe.

The number of books printed in the vernacular would continue to grow exponentially. Anderson writes, “It has been estimated that in the 40-odd years between the publication of the Gutenberg Bible and the close of the fifteenth century, more than 20,000,000 printed volumes were produced in Europe. Between 1500 and 1600, the number manufactured had reached between 150,000,000 and 200,000,000.” After 1640, the majority of books were published in vernacular languages rather than Latin. “The fall of Latin exemplified a larger process in which the sacred communities integrated by old sacred languages were gradually fragmented, pluralized, and territorialized,” Anderson writes. 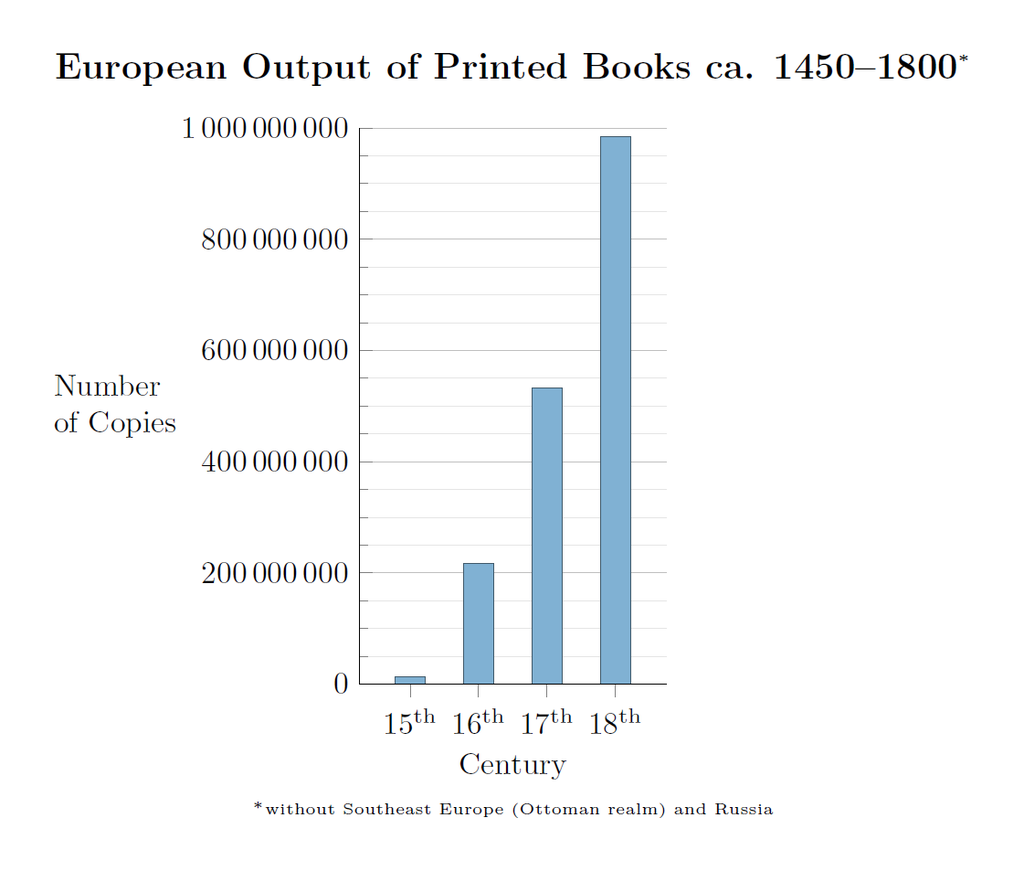 Three other important factors contributed to the rise of print-capitalism: the esotericization of Latin, the Reformation, and the increasing usage of French as the language of diplomacy.

Esotericization refers to the way that Renaissance humanists shifted the perception of Latin; they increasingly treated it as an ancient scholastic text rather than as a language for ordinary communication. For the humanists, Latin was a research language, part of their intellectual pursuit to revive pre-Christian literature, and not considered a language for publication.

The Protestant Reformation also had a lasting impact on the use of the vernacular language. In 1517, when Martin Luther nailed his 95 theses to a cathedral door, he wrote them in the German translation of the Latin Bible. Those theses were then reprinted and spread all over Germany, providing an immediate boost to the German language press. Three times as many books were published in German from 1520-1540 compared to 1500-1520. There was immense demand for Luther’s books and pamphlets; his translation of the Bible into German went through a remarkable 430 editions. As Anderson writes, “In effect, Luther became the first best-selling author so known. Or, to put it another way, the first writer who could ‘sell’ his new books on the basis of his name.”

However, the Counter-Reformation did try to preserve the use of Latin over the vernacular. Anderson notes, “Despite a temporary come-back during the Counter-Reformation, Latin’s hegemony was doomed. Nor are we speaking simply of a general popularity. Somewhat later, but at no less dizzying speed, Latin ceased to be the language of a pan-European high intelligentsia.”

Thirdly, the administrative centralization of political power had a lasting impact on the use of languages. For example, in England prior to the Norman Conquest all documents were written in Anglo-Saxon, which was also the language of the court. However, between around 1200 and 1350, state Latin was superseded by Norman French. It was the gradual fusion of Norman French and Anglo-Saxon that created the Early English language, which emerged as the language of the courts and parliament after 1362. A bible was printed in Early English in 1382, further shifting the language away from Latin. Guttenberg’s movable type printing press accelerated that trend towards vernacular English.

The rise of vernacular languages was a crucial precondition for the rise of the modern nation-state, which needs a people bound together by common customs, myths, and language. It is a part of turning a pre-modern people into something that the State can make legible, document, tax, conscript, and control. Benedict Anderson’s scholarship is a reminder that language has immense power. This contradicts a common criticism of capitalism, that markets are but a creation of States and elites to entrench their own wealth and power; however, Anderson’s work shows that print capitalism preceded, and perhaps even invented, the nation-state.

Anderson, who died only a few years ago, had a complicated set of politics. His views were influenced by post-colonial Marxism, but he rejected both orthodox Marxism and classical liberalism for paying insufficient analytical attention to the role of nationalism in explaining the architecture of the modern world. However, libertarians have much to learn from his work, not least about how technological innovation and expanding markets for knowledge transformed early modern Europe. Book selling entrepreneurs, simply trying to maximize their sales, had simultaneously bound together and divided Europeans in unexpected ways.