Where Have All the Disney Redheads Gone? 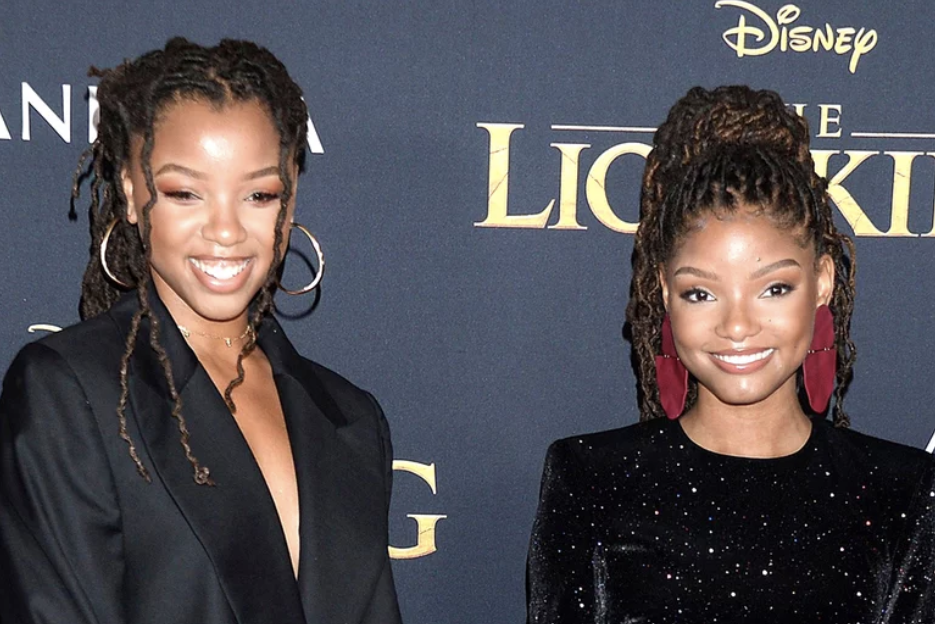 Anger has again been bubbling up, in its usual odiferous fashion, in various corners of the internet. Disney, the international multimedia conglomerate with the purchasing power of a small nation-state (or at least a goodly-sized fantasy duchy), has once again proven itself to be a fan-hating outfit that caters only to social justice warriors. It serves up politically-correct pablum that is obviously inferior in quality compared to the less politically-correct pablum of our own once-upon-a-time in a galaxy-brained-far-away childhoods. Or at least, thus saith ImaRealBoy69, scourge of many a Disney related sub-reddit and 4chan thread.

The latest efflorescence of angry think pieces was occasioned by Disney casting minority actors in live action reboot roles previously given to white, red-headed animated characters. Critics have claimed a kind of reverse racial bias, suggesting that Disney is catering to “ethnic” viewers by discriminating against the poor, beleaguered ginger community. All it takes is a casual stroll through the interwebs to turn up before/after comparison charts for beloved Disney characters, not infrequently accompanied by racist comments. 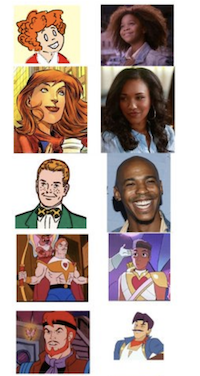 Is it possible that Disney’s casting decisions are simply a pragmatic response to changing consumer preferences, including both the internationalization of Hollywood film audiences and the transformation of the United States into a majority-minority country by the 2040s? Well, duh! And those who value living in a diverse, pluralistic society should welcome the transformation of Hollywood to match.

But let me also suggest a historically-informed, artistic explanation for Disney’s recasting decisions. Red hair once acted as an external signifier of ethnic “othering” in the early years of the Disney organization, a symbolic role portrayed more effectively in the twenty-first century by black skin.

Indeed, this is one of the oddities of reading articles discussing “ethnic” casting decisions as if “ethnicity” is some kind of ahistorical category that just means “non-Caucasian” or “white.” Based on that assumption, it looks, for example, like a non-ethnic redheaded Ariel is being transformed into an ethnic black one.

But any historian of race and ethnicity in American history will tell you that these are constantly changing categories. Not that long ago, “ethnic” was code not for non-white but generally used to describe white European immigrants who were not from Northern or Western Europe. You were “ethnic” if you were from Southern or Eastern Europe, including the Italians, Slavs, and the Irish (an exception to the regional rule of thumb).

Indeed, in the 19th century the Irish were not even considered fully white. They were often depicted in newspaper cartoons with distorted physical characteristics that emphasized their racial otherness (and which were often accompanied by ethnic stereotypes about a lack of cleanliness, work ethic, and self-control). Irish-Americans had to fight for cultural acceptance over the course of generations, though in the 19th century they often did so by violently repressing free black workers. I might not have a Mayflower pedigree, the Irish-American working man thought, but at least I’m not black. 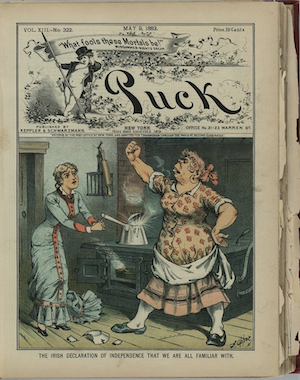 But by the mid-20th century anti-Irish prejudice, which had been acute a century prior, had begun to taper off as Irish-Americans built thriving communities (and successful political machines) in major cities like Boston and Chicago. One artifact of those old prejudices lingered on: suspicion of red hair.

While the gene for red hair is widely distributed across Northern Europe, it is most visible among the Irish, Scottish, and Welsh, with 10% or more of their populations having red hair. Red hair was considered exotic in America in the nineteenth century, both an object of fascination and repulsion.

And the old ethnic stereotypes affixed on immigrants from these countries were then ascribed to all people who happened to have red hair. For example, orphans with red hair had more difficulty finding adoptive parents than their tow-headed counterparts because of the widespread assumption that redheaded kids had bad tempers and were prone to violence. Whether on a conscious or subconscious level, red hair evoked Celtic ancestry, which signaled ethnic otherness, marginalization, and a general sense of not belonging in respectable society.

Some sense of that meaning persists even today, like calling someone a “red-headed stepchild” to signal that someone is unwelcome or uncouth. And it is no accident that the titular hero of Little Orphan Annie, first published in 1924, was given vividly red hair. Doing so reinforced the point that her situation was unusual, that not only do millionaire war profiteers not adopt many children, they especially don’t adopt redheaded ones!

The 1920s are also when Walt Disney started his career, with his first animated film in 1923 and the creation of Mickey Mouse in 1928. The Walt Disney Studio was formed in a milieu when red hair as a visual shorthand for Irish exclusion remained part of the broader cultural memory. That memory would become less intense over time, but through the mid-20th century it capably performed its role of signifying cultural distance between the character with red hair and the rest of society.

And having red hair evoke even a vague, subconscious sense of cultural alienation in the minds of the audience fits the character arc of most Disney protagonists. One standard Disney storyline is that of an outsider desperately seeking approval, failing temporarily, before discovering that they possessed heroic attributes deep down inside all along.

Take Ariel from the Little Mermaid. She yearns to be “part of your [land-lubber] world” but she has no legs. If you’re the one in charge of her animation design, what other visual signifiers can you use to trigger your audience to look at her and automatically think outsider? Oh yeah, red hair. Redheaded people are unwanted, don’t belong, are rebellious. And they make damn good mermaids. (Although, as medieval illuminations show, mermaids came in many shapes and hues.)

Red hair was also a useful external signifier because of what it wasn’t. Redheadness was a relatively benign category of alienation in the twentieth century; not so in the nineteenth century, when red hair and Irish descent were the object of legal exclusion and intense cultural hatred. Using red hair in the nineteenth century would likely have provoked revulsion for non-Celtic audiences, but by the twentieth century the popular reaction had been softened to something closer to sympathy, a feeling of pity for a kid subject to schoolyard bullying.

But today, true Irish-American exclusion has passed from living memory. Red hair no longer carries the same artistically-useful cultural baggage it once did, or at least not nearly to the same extent. If you’re an animation studio, what’s another visual signifier of cultural alienation that might serve as a replacement? It needs to be something that most folks will instantaneously see as a traditional marker of exclusion, but it has to be relatively benign today compared to a generation or so ago.

It shouldn’t take a mermaid (or merman) to catch my drift. In the early twenty-first century, black skin functions as a more effective external signifier of cultural alienation than does red hair. While structural racism persists and white supremacy has seen a resurgence in recent years, we recognize that racism is not as powerful as it was half a century ago. Black skin is not so powerful a physical signifier as to evoke repugnance or dismissal in white audiences (as it would have for many in the early and mid-twentieth century), but it is not yet so benign as to lose its ability to signal otherness in a society which remains racially unequal and divided.

Indeed, to return to our adoption example, just as the New York Times once worried about the difficulties of placing redheaded children in adoptive families, today demand for white adoptees is higher than for black adoptees. As Kimberly Jade Norwood puts it, “In the adoption market, race and color combine to create another preference hierarchy: white children are preferred over nonwhite.” When Sony Pictures released a new film version of Annie in 2014, replacing the redheaded Annie of the 1920s with Quvenzhané Wallis, it was simply a realistic reflection of the changing cultural and racial mores of America in the intervening century.

So, next time you hear an announcement about yet another traditionally redheaded character being played by a black or other minority actor, realize that doing so is a reasonable artistic decision that will help audiences automatically pick up on the core themes of the narrative. Indeed, recasting may more accurately reflect the originally intended ethos of the character regardless of what that character once looked like.