Smith discusses the importance of Garrison’s call for the free states to secede from the Union, and the eventual disagreement with Frederick Douglass. 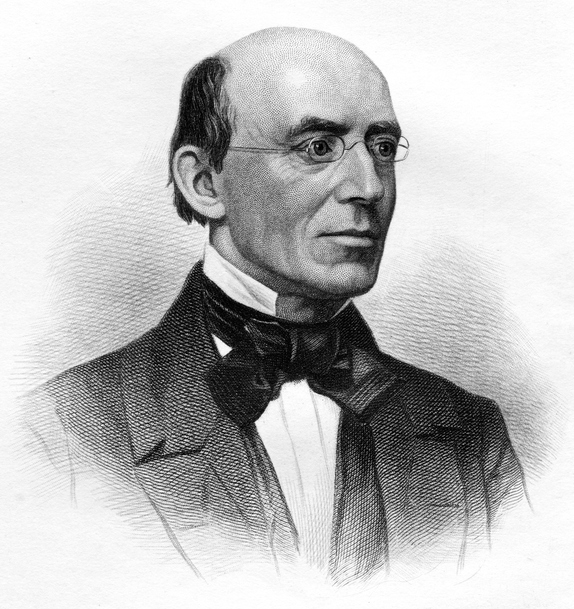 By the late 1830s, William Lloyd Garrison had developed his belief that the U.S. Constitution was proslavery. Not long afterwards, Garrison arrived at what he believed to be the logical corollary of this belief, namely, that abolitionists should call for secession of free states from the Union. This position, known as “disunionism,” provoked heated debate in the abolitionist community. It also brought about a split between Garrison and the escaped slave Frederick Douglass. For over ten years Douglass was a colleague and close friend of Garrison. During those years Douglass defended the Garrisonian positions down the line. By the early 1850s, however, Douglass, under the influence of Gerrit Smith, abandoned the position that the U.S. Constitution is proslavery. He also changed his mind about Garrison’s call to dissolve the Union. A former disciple now attacked the positions of his mentor—positions Douglass himself had defended in public for over a decade—and this generated tension between the two men.

After his escape from slavery, Douglass ended up in New Bedford, where he made his living as a common laborer. After living four or five months in New Bedford, Douglass was given a gift subscription to the Liberator. This brought him “into contact with the mind of Mr. Garrison, and his paper took a place in my heart second only to the Bible.” “I love this paper and its editor,” wrote Douglass. “His words were full of holy fire, and straight to the point.”

In March 1860. Douglass explained that some of his views had changed over the course of the past 14 years.

When I escaped from slavery, and was introduced to the Garrisonians, I adopted very many of their opinions, and defended them just as long as I deemed them true. I was young, had read but little, and naturally took some things on trust. Subsequent experience and reading have led me to examine for myself. This has brought me to other conclusions.

Two changes were especially significant for Douglass. He initially agreed with the Garrisonians that the Constitution was proslavery, and he advocated disunionism as the only moral position consistent with abolitionism. In 1850 Douglass debated Gerrit Smith on the advisability of disunionism, maintaining that dissolution of the Union would make it impossible for slaveholders to maintain control of their slaves. Within a year, however, he wrote to Smith that he was “sick and tired of arguing on the slaveholders’ side” with the argument that slavery is sanctioned by the Constitution. Douglass now accepted the antislavery interpretation, and this caused him to abandon the Garrisonian rejection of voting, as well as Garrison’s call for secession by free states. I shall examine Douglass’s beliefs and how they changed in my next essay. In this essay I provide some background on Garrison and his advocacy of disunionism.

Henry Mayer (All on Fire: William Lloyd Garrison and the Abolition of Slavery, Norton, 1998) commented on the gradual conversion of Garrison to disunionism during the late 1830s. “Unlike Garrison’s attacks upon the colonizationists or his endorsement of women’s rights…in which his intentions were clear and his gestures compelling, his assault on the Constitution began ambiguously as prophetic utterances and only gradually developed into a political and philosophical critique.” Whatever the timing may have been, there can be no doubt that Garrison’s belief that the Constitution was proslavery was essential to his call for free states to secede from slave states and form their own union, one in which slavery would not be allowed. As Garrison and his followers saw the matter, disunionism was a logical corollary of the belief that the Constitution was proslavery.

Was Garrison right? Did the advocacy of disunionism follow logically from his interpretation of the Constitution as proslavery? One of the few modern historians to discuss this question is Aileen S. Kraditor in her indispensable study, Means and Ends in American Abolitionism:  Garrison and His Critics on Strategy and Tactics, 1834-1850 (1969). Kraditor pointed out that “Garrison’s interpretation of the Constitution is now regarded as the correct one”; nevertheless, the same historians who agree with Garrison on this point typically reject as politically naïve his call for a voluntary secession of free states from slave states. Quoting Kraditor:

Each faction saw a logical connection between its theory and its practice; if they were right, the historians are wrong. A recent survey of changing interpretations of Garrison suggests that historians have felt more kinship with the middle-of-the-road liberal abolitionists, who worked within the constitutional framework, than with radicals of the Garrison stripe. [Historians] can easily, or perhaps unwittingly, sever the activist’s theory from his practice—on the one hand, accept Garrison’s reading of the Constitution but consider absurd the practical policy deducible from it, and on the other hand regard the political abolitionists’ exegesis of the Constitution [that it is antislavery] to be historically false, yet consider realistic the policy that translated that exegesis into practice. But perhaps in this instance the logician is nearer the truth.

Consistency was important to all abolitionists; none would concede a breach between theory and practice. As a result, during the late 1830s and early 1840s we find an interesting array of positions. Garrison encountered considerable opposition to disunionism among fellow abolitionists. Before the publication of William Goodell’s Views of American Constitutional Law in 1844, and especially Lysander Spooner’s Unconstitutionality of Slavery in 1845, many political abolitionists, including members of the Liberty Party (formed in 1840), conceded that the Constitution was proslavery. Consequently, they claimed that the federal government had no authority to banish slavery in the states—such a measure would require a constitutional amendment. But the federal government did have the constitutional authority to prohibit slavery in Washington, D.C. and in federal territories, and it could render illegal the slave trade between states. Only political measures could accomplish these goals. For abolitionists to denounce voting, according to political abolitionists, would be to surrender the most effective weapon available to the antislavery activists. Moreover, to call for free states to secede from the Union would strike most people as a hare-brained, anarchistic notion that would prevent reasonable people from joining the antislavery crusade.

A notable exception to this position was defended by the prominent abolitionist Alvan Stewart. Stewart maintained, as early as 1837, that the Constitution should be understood as antislavery, Then he went on to defend the position, unusual at the time, that the federal government had the power to abolish slavery in the states. As William Goodell wrote, “Alvan Stewart was the first to elaborate a compact argument in defence of the doctrine that the Federal government had constitutional power to abolish slavery in the slave States.” Stewart was joined in his dissent by Thomas Morris, who said in 1837 that the controversy over the Constitution had “long been settled, that by the Declaration of Independence, followed by the Constitution of the United States, Slavery, by the legal force and fair construction of these instruments, is forever abolished throughout our country.” A proslavery construction would mean that “a person can be converted by law into a thing.” The first book to defend the unconstitutionality of slavery was probably the poorly reasoned case presented in An Argument on the Unconstitutionality of Slavery, published in 1841 by the Boston chemist George Washington F. Mellan.

Despite these and other early exceptions, the position that the Constitution is proslavery dominated the thinking of political abolitionists until 1844. After that year important abolitionists, such as James Birney, Gerrit Smith, and other members of the Liberty Party, sought to refute the Garrisonian interpretation. Garrison replied in detail with lengthy articles in the Liberator. These articles defended both the proslavery interpretation of the Constitution and the wisdom of secession by free states.

1844 also saw contentious debates over the annexation of Texas. Abolitionists opposed annexation because they understood that Southerners anticipated the division of Texas into smaller areas, which would then be admitted to the Union as slave states (according to the Missouri compromise of 1820). This eventuality would dramatically increase control of the federal government by the detested Slave Power. Abolitionists also opposed the subsequent war with Mexico (1846-48), condemning it as naked aggression by the United State government. It was a war brought about and supported by the selfsame Slave Power. Political candidates were automatically disqualified from support by abolitionists if they supported either annexation or the war.

In 1844, Garrisonians supported a resolution submitted to the American Anti-Slavery Society (AASS) that called for secession by free states. This resolution passed by a large margin. Secession was defended by Wendell Phillips on the floor of this tenth-anniversary convention. He declared:

[T]he only exodus of the slave to freedom, unless it be one of blood, must be over the ruins of the present American Church and the grave of the present Union…[T]he abolitionists of this country should make it one of the primary objects of their agitation, to dissolve the American Union….[S]ecession from the present United States Government is the duty of every abolitionist; since no one can take office, or throw a vote for another to hold office, under the U.S. Constitution, without violating his anti-slavery principles, and rendering himself an abettor of the slaveholder in his sin.

Garrison followed up with an open letter, which stated (in part) that a primary goal of abolitionists should be

To persuade Northern voters, that the strongest political influence which they can wield for the overthrow of slavery, is, to cease sustaining the existing compact, by withdrawing from the polls, and calmly waiting for the time when a righteous government shall supersede the institutions of tyranny. To endeavor to effect, by all just and peaceful means, such a change in the public sentiment of the North as shall convince the South that nothing but the immediate abolition of slavery can make us a united people.

Garrison’s critics charged that he was attempting to make belief in disunionism a condition of membership in the AASS—a demand that Garrison had opposed years earlier in a controversy over women’s rights. Garrison set the record straight, again. The only condition of membership should be a sincere belief in the immediate abolition of slavery. All other topics were to be decided according to the conscience of individual members. Merely because a policy recommendation was passed by a majority of members did not obligate dissenters to defend that policy. A policy proposal, such as the advocacy of women’s rights and disunionism, merely expressed the beliefs of the majority, nothing more.