Ayn Rand, a controversial novelist and philosopher, was born in Russia, but emigrated to the United States when she was 21. “For the record,” she declared in her monthly periodical, The Objectivist, “I disapprove of, disagree with, and have no connection with, the latest aberration of some conservatives, the so‐​called ‘hippies of the right.’” These “libertarians,” she emphasized in Philosophy: Who Needs It, “subordinate reason to whims, and substitute anarchism for capitalism.” They undermine individual rights by attacking the government’s legitimate monopoly on the retaliatory use of force and by failing to recognize the dependence of politics on broader philosophical foundations. The realization of human freedom requires, in Rand’s view, a simultaneous commitment to reason, egoism, and individualism. Absent any of these prerequisites, freedom cannot long survive.

Despite her antipathy to this anarchic brand of libertarianism, however, Rand profoundly inspired a generation of individuals to pursue the goal of a libertarian society. Some of her closest followers have occupied positions in government, among them Martin Anderson, who served in the Reagan administration, and Alan Greenspan, who served as chairman of the Federal Reserve Board. Others have challenged contemporary politics from without, forming such organizations as the Cato Institute, the Reason Foundation, and the Libertarian Party. Various aspects of the position she put forward have found their way into the works of libertarian‐​minded academic philosophers, among them Douglas Den Uyl, John Hospers, Tibor Machan, Eric Mack, Douglas Rasmussen, David Kelley, and Tara Smith. She also has played a crucial role in shaping the views of psychologist Nathaniel Branden.

Born Alissa Zinovievna Rosenbaum in St. Petersburg during the Russian Silver Age, Rand was inspired by the heroic ideals embodied in the philosophy of Friedrich Nietzsche and the Romantic fiction and drama of such writers as Victor Hugo, Edmond Rostand, and Friedrich Schiller. Educated under the Soviets, she embraced the Russian dialectical tendency toward transcending the dualisms of mind and body, theory and practice, morality and prudence. Yet she adamantly rejected that culture’s altruist religious and moral traditions and statist politics. An avowed atheist, she maintained that the communists had merely substituted subordination of the individual to the collective and the state for subordination of the individual to God. Her profoundly negative personal experience with communism had long‐​term effects; she immigrated to America in 1926, determined to inform the world of the barbarity of totalitarian dictatorship. Her first novel, We the Living, published in 1936, focused on the conflict between the individual and the state, and it attempted to show how totalitarianism created an “airtight” environment that destroyed society’s best men and women.

Around this time, Rand began corresponding with several leading American proponents of individualism. In the early 1930s, she wrote to H. L. Mencken, whom she regarded “as the foremost champion of individualism” in America, and she quickly identified herself as “a young and very humble brother‐​in‐​arms” of Mencken’s libertarian cause. Rand hoped to translate the remarkable success of her next novel, The Fountainhead, into a broad antistatist political movement of the leading conservatives and libertarians of the day with whom she had become acquainted, including Rose Wilder Lane, Albert Jay Nock, and Isabel Paterson. The coalition never materialized, however, owing to the ideological disparity of its prospective members, many of whom Rand regarded as traditionalists and religionists.

Her relationship with Paterson—whose God of the Machine was published in 1943, the same year as both The Fountainhead and Lane’s Discovery of Freedom—probably had the deepest impact on Rand’s growing individualist sensibility. Paterson had introduced Rand to many key libertarian works in economics, history, philosophy, and politics. She also publicized Rand’s writings in her New York Herald Tribune column. Both women were headstrong, however, and their differences—primarily their disparate views of religion—eventually undermined their friendship. Nonetheless, Rand characterized God of the Machine as among the most “brilliant,” “extraordinary,” “invaluable,” “sparkling,” “heroic,” and “illustrious” political tracts of its time—a virtual antidote to Marx’s Das Kapital, and “the greatest defense of capitalism” she had “ever read.”

Rand also had dealings with other libertarian writers, such as Leonard Read and Henry Hazlitt. Hazlitt introduced her to Ludwig von Mises, the leading economist of the Austrian School. Although Rand objected to certain aspects of Mises’s “praxeological” approach to the human sciences and to his views of morality, she respected his economic defense of free markets, and, in later years, she championed his writings in her various publications. Mises, in turn, is said to have greatly respected Rand’s ideological courage.

By contrast, Rand did not take well to the writings of F. A. Hayek. Hayek, a student and associate of Mises and an eventual Nobel laureate in economics, had published The Road to Serfdom in 1944. In her Marginalia, Rand expressed the conviction that Hayek’s work was “real poison” because it compromised the case for freedom with various “collectivist” and “altruist” justifications. For Rand, such compromises made Hayek a “pernicious enemy” of the individualist movement; nothing less than a full, moral defense of unadulterated laissez‐​faire capitalism would do.

In the 1940s, while laboring on her next novel, Atlas Shrugged, Rand worked in Hollywood as a screenwriter. During those years, she became a vocal critic of communist propaganda in film—a conviction she shared with conservative members of the Motion Picture Alliance for the Preservation of American Ideals, such as Gary Cooper, Walt Disney, Adolphe Menjou, Robert Taylor, and John Wayne. For the alliance, Rand authored a “Screen Guide for Americans,” and she also testified as a friendly witness before the House Un‐​American Activities Committee.

By the time Atlas Shrugged was published in 1957, Rand had achieved worldwide fame for offering a controversial, integrated, secular defense of capitalism. In Atlas Shrugged, she presented the rudiments of a systematic philosophy that she later termed Objectivism. Her philosophy rested on the premise that reality is what it is, independent of what human beings think or feel, and that reason is the only means of knowing it. Rand defended objective values, viewing human life as the standard by which to judge good and evil. Essential to her ethical egoism is the doctrine that human beings can and should exist as independent equals, neither sacrificing others to themselves nor themselves to others. For Rand, the “trader principle,” giving value for value, is the only appropriate social maxim. Because human beings must be free to pursue the values that sustain their own lives, the doctrine of individual rights is indispensable to ensure freedom within a social context. Rand shared with many classical liberals and modern libertarians this commitment to individual rights and the rule of objective law. She argued that, to protect the individual’s rights to life, liberty, property, and the pursuit of happiness, a government monopoly on the coercive use of force was necessary—through the establishment of courts, the police, and the military. Because capitalism, in her view, was based on the “trader principle” and on the principle of nonaggression (i.e., that no human being should attain values by initiating the use of force against others), she maintained that it was the only social system consonant with a genuinely human existence.

In the years after Atlas Shrugged, Rand worked with her closest associate, Nathaniel Branden, who organized the Nathaniel Branden Institute to disseminate the principles of Objectivism. After a bitter personal break with Rand in 1968, Branden established himself as an independent psychologist and a pioneer of the “self‐​esteem movement.” However, in its heyday, Branden’s institute was to influence a large number of students, offering live and taped lecture courses dealing with every aspect of Rand’s thought—from her epistemology to her esthetics. Many of these students were potential libertarians who were discontented with both modern “liberalism,” which advocated government regulation of economic life, and modern “conservatism,” which advocated government regulation of people’s mores. Objectivism offered a politics that contrasts sharply with the “welfare–warfare” mentality promulgated on both ends of the political spectrum. Rand’s vehement opposition to John F. Kennedy’s “fascist” New Frontier and Lyndon B. Johnson’s Great Society matched her intense disdain for the military draft and the Vietnam War. Her rejection of Supreme Court decisions on obscenity and pornography, and her repudiation of the Religious Right, inspired many libertarian activists and writers, who applauded her call for “free minds and free markets”—a slogan that Reason, the libertarian magazine, later adopted as its credo.

One of these writers, Murray Rothbard, who is widely credited as the leading libertarian thinker of the late 20th century, enjoyed a brief period of intellectual engagement with Rand and her inner circle in the late 1950s. Despite their common Aristotelian premises, Rand and Rothbard differed in their views on the role of government—a difference that contributed to an irreparable break between them. Years later, Rand wrote in her Letters that the anarchistic Rothbard and his “so‐​called libertarians” were her “avowed enemies,” who sought “to cash in on [her] name” and philosophy. Rothbard, who often denigrated the “cult” that surrounded Rand, voiced his distress over the intolerance of religious faith that Randians brought to the libertarian movement. Still, he credited Rand with having had a significant impact on that movement. Individualist feminists within libertarianism also have drawn strength from Rand’s writings. In Feminist Interpretations of Ayn Rand, libertarian writers such as Joan Kennedy Taylor, Wendy McElroy, and Sharon Presley have applauded Rand’s contribution to the cause of women’s rights. It is a paradoxical contribution, they admit, because Rand repudiated the collectivist Women’s Lib movement of the 1970s and because her fiction depicts heroines seeking masochistic fulfillment in male hero worship. But these works of fiction also present autonomous female characters, undeterred by stultifying cultural traditions and social norms, pursuing careers as engineers, journalists, and industrial executives. The idea that women should not be sacrificed on the altar of perennial motherhood, that they can be independent, self‐​defining, and self‐​motivating, finds great support in Rand’s work. An ardent defender of the right of women to have abortions and of a woman’s right to her own life, Rand put forth an alternative vision for those libertarian feminists who sought to reclaim the women’s movement as an outgrowth of classical liberalism and individualism.

Although Rand died in 1982, her legacy lives on in many segments of the libertarian intellectual movement. That her legacy has finally sparked the interest of scholars worldwide is proof of its enduring quality.

Cox, Stephen. The Woman and the Dynamo: Isabel Paterson and the Idea of America. New Brunswick, NJ: Transaction, 2004. 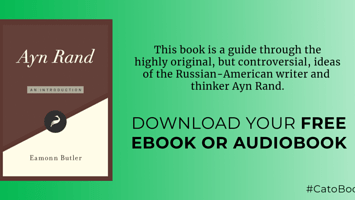 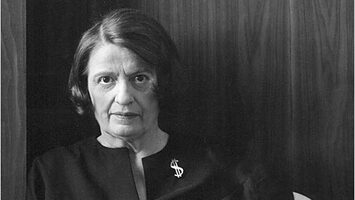 END_OF_DOCUMENT_TOKEN_TO_BE_REPLACED

A short biography of Ayn Rand, one of three women who launched the modern American libertarian movement.

Creators and Producers: A Biography of Ayn Rand

Ayn Rand was one of the three “founding mothers” of modern libertarianism. She is best known as the author of Atlas Shrugged and other novels.

Doherty combines a short biography of the mother of Objectivism with an analysis of the intellectual impact of her published works.