Adam Smith on the Benefit of Obeying Authority

Smith was not romantic about political authority. 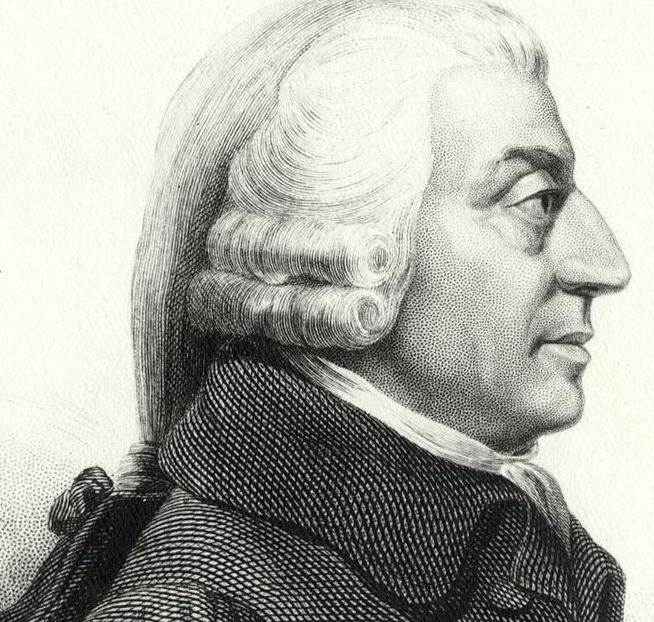 Adam Smith was a philosophical and political anomaly on many fronts. He distinguished himself from other philosophers and political economists by opposing violations of commutative justice often perpetrated and legitimized by political authority. Commutative justice is defined as the rules and norms which govern our daily lives in a variety of transactions and exchanges. Smith discusses violations of commutative justice include colonization, slavery, and war, all of which Smith opposed. Comparatively, some classical liberals, such as the later John Stuart Mill, publicly supported colonialism and imperialism. Mill regarded the right to self-government as the right of civilized nations only: “despotism is a legitimate mode of government in dealing with barbarians, provided the end be their improvement and the means justified by actually effecting that end.”1 On the other hand, Smith neither accepted Mill’s proposition and regarded imperialism as a net cost on British citizens.

Given what I previously mentioned, Smith sounds like a radical, as anti-imperialism is a revolutionary idea to have in the 18th-century. In contrast with his opposition to the British empire, he regarded submission to political authority, which results from the natural admiration people have for the powerful, as a force leading us in the right direction. Smith is not contradicting himself. His opposition to violent injustices and his appreciation for the natural tendency to submit to political authority, which I call acquiescence, stem from his three pillars of development theory. The three pillars of development, according to Smith, are peace, easy taxes, and the tolerable administration of justice.2

Smith was not romantic about political authority. In fact, he criticized empire using two public choice arguments. First, Smith critiqued the colonies based on the logic of concentrated benefits and dispersed costs. Smith argued that there were major special interests involved in maintaining the colonies and that the primary beneficiaries of colonization were the British merchants who sold to the colonies. British merchants were able to make monopoly profits at the cost of British taxpayers because they enjoyed special privileges due to import restrictions from other countries.3 Second, Smith pointed out that the beneficiaries of the colonies have an incentive to maximize their usage of British resources to protect their rent-seeking from outside aggressors or to maintain their trade monopolies.4 Smith says: “Statesmen, and such statesmen only, are capable of fancying that they will find some advantage in employing the blood and treasure of their fellow-citizens to found and maintain such an empire”5 The behavior of the beneficiaries results in steadily increasing expenditures that raise the debt, raise the rate of mercantile profits, and harms British citizens.

Moreover, Smith also recognized the brutal and unjust violence imposed on slaves, and staunchly criticized slave-masters: “There is not a negro from the coast of Africa who does not, in this respect, possess a degree of magnanimity which the soul of his sordid master is too often scarce capable of conceiving.”6 Smith also hints that society cannot subsist if specific rules of conduct become normalized, directly talking about the murder of new-born infants in Athens, but even indirectly hinting at the horrible practice of slavery. Also, he highlights that the love of one’s own nation disposes us to the jealousy and hatred of other nations. The jealousy and hatred reflect what Smith calls “savage patriotism,” which fuels war and destruction of other nations.7

The Tendency to be Acquiescent

First, as Smith explains, we tend to admire and revere those with great wealth and fame: “our obsequiousness to our superiors more frequently arises from our admiration of the advantages of their situation, than from any private expectation of benefit from their good-will.”8 Out of the same principle that we admire those with wealth, we revere and thus are acquiescent to those with political authority. Out of our admiration for the wealthy, people tend to draw attention to their righteous behavior and look past their injustice. The reason people admire the wealthy is that wealth is apparent in its owner. Also, almost everyone recognizes the value of wealth. Thus, it became a focal method of distinguishing and signaling one’s rank in society. Comparatively, wisdom is not focal, as what is considered wise to one man may be repulsive to another. Hence, most societies rank individuals based on wealth instead of wisdom. And, at least historically, wealth and political authority largely coincided.

Second, we also tend to be acquiescent to political authority because it is based on violence and domination. As defined by Max Weber, the state, the most obvious manifestation of political authority, is the organization that possesses a monopoly of the use of legitimate physical force in a given territory. The force and violence that those with political authority use requires a high degree of self-command. Smith says we naturally tend to overrate self-command-based qualities. We overestimate them because we are so enchanted by the valor they require to maintain that we become indifferent to the justice or injustice of the action brought about by self-command. In Smith’s own words, “the effects [of self-command] are too often but too little regarded.”9 Unfortunately, our admiration for self-command-based pursuits too often extends to unjust activity as well. “Great warlike exploit” attracts a degree of “esteem,” even when it is “undertaken contrary to every principle of justice” and by “very worthless characters.”10 For better or worse, our acquiescence to political authority is partly influenced by our appreciation of self-command while undervaluing its sometimes destructive consequences.

On the Benefits of Acquiescence

Smith goes further to say that our tendency to be acquiescent is, in fact, a fortunate nature, even in the face of the potential injustices and misevaluations previously mentioned. Smith highlights that by the admiration we have for political authority, “we are taught to submit more easily to those superiors” and to regard the perpetrators of “fortunate violence”11 with “respectful affection.”12 The respectful affection, which I call acquiescence, makes us more likely to submit with less reluctance “under that government which an irresistible force imposes on them.”13  Whether the government is being imposed by a “splendid character”14 such as Caesar or a savage barbarian such as Genghis Khan is irrelevant.

Throughout his writings, Smith emphasizes the importance of a stable and integrated polity for economic development. He believes that a stable polity is necessary for the establishment of peace. According to him, peace is the first of three pillars of development. In a (now lost) manuscript quoted by Dugald Stewart, Smith says that “little else is requisite to carry a state to the highest degree of opulence, from the lowest barbarism, but peace, easy taxes, and a tolerable administration of justice.”15 Acquiescence to political authority, though it may cause people to give a blind eye to some or many injustices, usually leads to better economic outcomes because it maintains the peace necessary for development.

Smith was not ignorant of public choice problems with political authority. His critique of imperialism was based on two public choice arguments. However, public choice may offer a set of arguments against cultural acquiescence to political authority. Citizens are not immune from political authority’s expansion and encroachment on liberties. As John Philpot Curran, an Irish political speaker, said in his 1790 speech: “It is the common fate of the indolent to see their rights become a prey to the active. The condition upon which God hath given liberty to man is eternal vigilance; which condition if he break, servitude is at once the consequence of his crime and the punishment of his guilt.”20 An acquiescent citizenry will likely slowly lose its potency to engage in political change. It will become prey to political authority because politicians, as public choice intuition reveals, are self-interested like others and will use government apparatus to advance their special interests if they feel safe from public protest or retribution.

Another issue with acquiescent citizenries is that it will make the distribution of political power more concentrated in the hands of political authority, or more monocentric as opposed to polycentric. A monocentric order is one where there is a single unit of decision-making. A polycentric order is one where there are multiple units of decision-making, each of which operates with some degree of autonomy. An active citizenry makes a more polycentric order since citizens play a larger role in the decision-making process, whether through democratic means or not. Polycentricity in the control of violence may be dangerous. However, for the citizenry to have the potential power to bargain and to threaten political authority, in some way, it is almost necessary to keep it from being intolerably unjust. Polycentricity allows for more opportunities for peace because one of its defining characteristics is that it provides for “mutual adjustment of a large number of centres.”21

If we would like to constrain government while minimizing violence, as Smith desires according to the liberal plan, then cultivating cultural vigilance and skepticism against political authority is likely the best way to do that. Cultural vigilance and skepticism signals a credible threat to political authority, hopefully mitigating the expansion of their power, while not necessarily disrupting the peace required for economic development. The reason skepticism ought to be directed towards political authority, and not only political coercion is because we know political authority is drawn to coercion. The widespread cultural appreciation of liberty and the responsibility of citizens is particularly important to constrain the government effectively. In the words of Don Lavoie: “Political and economic freedom is not simply the absence of government controls over the economy and of dictatorial authority. It involves the emergence of alternative and more fragmented notions of authority in which participants in effect have to earn the always partial authority they have.” With their partial authority, which can be strictly non-violent, citizens can protect their rights from their government if it were ever to attempt to harm them.

Smith belongs to the part of classical liberalism that highlights the importance of peace as its pinnacle and the source of development. Though he would admit that the violent injustices perpetuated by political authority are terrible, he would assert that protest or revolution could lead to worse outcomes. The problem of acquiescence is that it allows political authority to exploit its citizenry’s submission and further encroach on their liberties. The cost of doing nothing is seldom nothing. It usually harms the subsets of society with the least support, since harming them is less likely to alarm the greater part of the population.

The issue of acquiescence or resistance to political authority is incredibly complex and multifaceted. There are certainly good arguments to be made on both sides. There is a strong case for Smith’s position that peace is a prerequisite to development. A middle path between the submission Smith describes, and the rebellion of the man of systems is healthy. I believe the middle path would be for people to cultivate vigilance with political authority to the best of their ability, so they can demand justice whenever it is intolerably violated. Regardless of where we stand, Smith’s insights on political authority are enlightening and have a lot to teach both those who agree and disagree.

Yahya is a George Mason University recent graduate in Economics with a focus in Public Choice, Institutions, and Economic History. He is also a Schumpeter Fellow at the Mercatus Center and a Research Fellow at the Center for Non-Violence and Peace studies. He is currently a Graduate Fellow in Mercatus Center’s F.A. Hayel Program.