The Ancient Rights of Englishmen

When the American revolutionaries declared their independence, it was founded on a solid thousand years of English history. 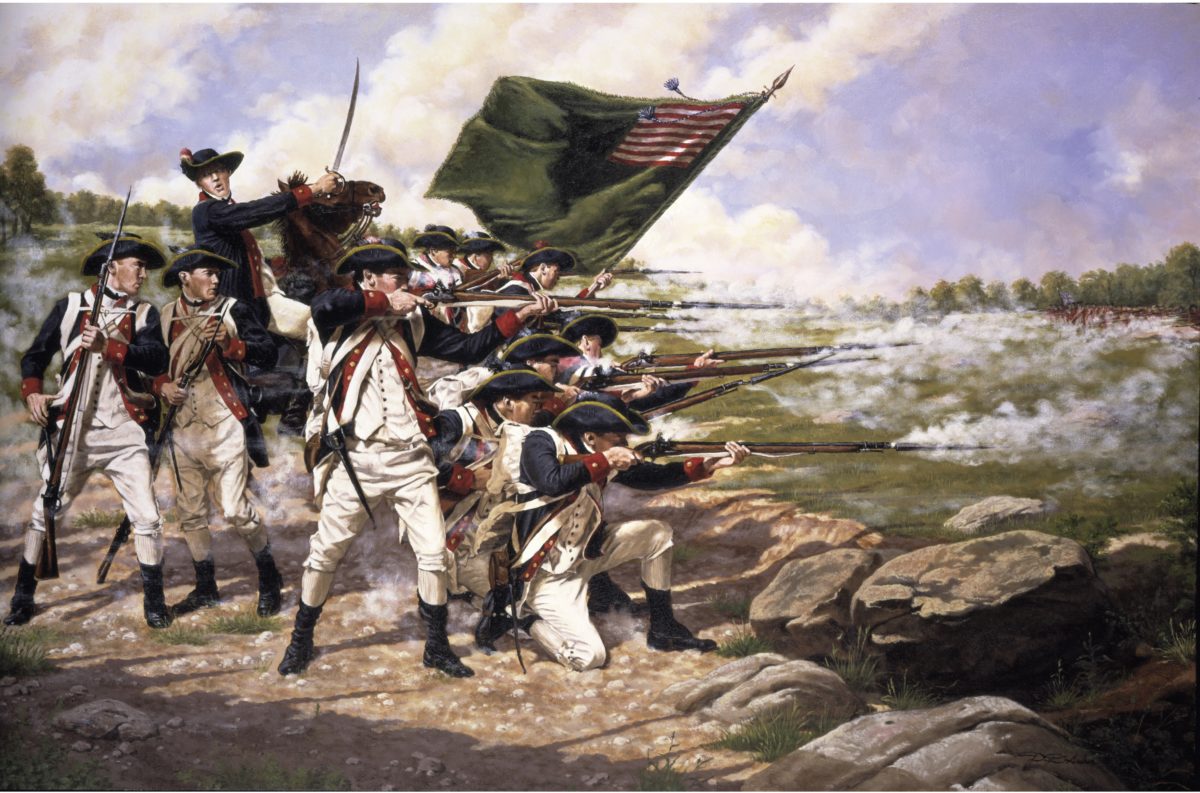 In 1776 thirteen British colonies in North America declared their independence from the British Empire and began an experiment in republican government. If one were to ask those colonists, they would likely would have denied any radicalism, seeing their revolution as a fight against a tyrannical British government that was abrogating their traditional rights as Englishmen. While their decision to abandon a long-standing monarchy and embark on representative democracy was more radical than they may have considered, it was perfectly in line with their history as Englishmen.

It is not easy to pinpoint the exact time that the republican spirit began developing in England. After all, prior to the Norman Invasion in 1066 the king of England was nominated by the previous king and elected by the Witangemot. It was not strictly hereditary, which is how Harold Godwinson, who had no royal blood whatsoever, wound up on the throne in 1066 while William of Normandy believed it should be his (William was the late King Edward’s cousin). The Witangemot was by no means a democratic institution, but it can be seen as one small limitation on the absolute power of monarchies in England.[2]

After the Norman invasion William created a kind of bureaucracy that was capable of governing the kingdom in his absence as he controlled large areas of land in modern day France and spent considerable time outside of the kingdom. This Norman England consisted of a new Norman nobility that owed its position to William and showed him considerable loyalty.[3] In addition to this new nobility, William’s Norman England featured a few important developments.

The Witangemot was replaced by a new council of advisors along with a chief justiciar. Together, this group was able to administer the king’s justice whether the king was in England or not. Another important change was the sheriff becoming a royal official. As such the sheriff was responsible for enforcing royal law and maintaining royal justice at the county level. Finally, the reforms in the church cannot be underestimated as they suborned the church to royal authority more and coerced it into becoming more of a partner in supporting royal authority throughout the realm.[4] The English proceeded to govern themselves in the name of the king under each monarch until the early thirteenth century when John I lost all the French lands to the French king.

In 1215 John’s barons had grown tired of the ever-increasing demands being made by the Plantagenet kings and they rose in rebellion against him. These barons forced John to issue Magna Carta, which placed some serious limits on absolute monarchy. This document guaranteed certain private property rights by requiring that the king could not take horses and wagons, grain, wood, etc., without paying for them or through due process. Magna Carta prohibited the king from selling his justice or depriving anyone of it. It also secured a right to not be punished for crimes beyond the degree of the crime committed, or until after due process which was administered by the peers of the accused. The original document also included a clause that allowed for uncivil disobedience should the king not honor his side of the agreement.

While it is debatable whether the Magna Carta itself accomplished those things the barons desired, it clearly inspired later generations of Englishmen in their beliefs about the inherited rights of Englishmen. These rights became an important part of the arguments against Charles I that set the stage for the English Civil War. After all, the parliamentarians argued that they were doing nothing more than protecting the existing order, which Charles was trying to change.[5] Charles dissolved Parliament and attempted to rule without it, but raised the ire of his subjects when he tried to collect the Ship Money, which was a tax that was supposed to be used in times of emergency to pay for coastal defense. The King’s opponents argued that he could not charge the Ship Money because there was no emergency, therefore he needed to call Parliament and ask for money.[6] Beyond that, Edward Coke, a supporter of Parliament, declared that Magna Carta saved England from tyranny by placing the king under the law, limiting his powers, and that it brought about constitutional government.[7]

Magna Carta and the arguments against the tyranny of absolute monarchy were part of the shared history that migrated to the western hemisphere along with the colonists that moved there throughout the seventeenth century. The peculiarities of the English constitution were magnified in America and the colonists moved much further down the road toward republicanism than did their counterparts in England because of some key differences between the two. The lack of an established church under the king’s control meant that the king could not rely on it to help maintain loyalty. There was also no aristocracy in the colonies. The wealthiest of American elites were no better than minor gentry in England and the ranks of the elites were more accessible. These wealthy Americans did not dominate their locales in the same way that English aristocrats did and the less wealthy knew there were ways for them to join the ranks of the elites. Finally, the great distance, and the time it took to cross that distance, led to a certain amount of negligence by the crown, leaving the colonists to govern themselves in near complete autonomy.[8] For all this, the American colonies were ideally suited for the development of true republicanism.[9]

In the 1760s, after the French and Indian War, the Parliament in London decided it needed to recoup the money it spent fighting the French in the colonies by levying colonial taxes. In the process, they hoped to exert their authority over the colonies. By that time however, the colonists had been left alone too long and they were not interested in relinquishing the autonomy they enjoyed. More than that though, the colonists saw it as their right as Englishmen to govern themselves, and this is where they began to expound on their ideas, first of self-rule, and then of republicanism.

What, then, is the subject of our controversy with the mother country? It is this: Whether we shall preserve the security to our lives and properties, which the law of nature, the genius of the British constitution, and our charters afford us; or whether we shall resign them into the hands of the British House of Commons, which is no more privileged to dispose of them than the Great Mogul.[10]

In writing this he touched on an important distinction between the colonists and the British on the nature of the constitution and the importance of their charters. In England the constitution was the combination of the king, the House of Lords, representing the interests of the nobility, and the House of Commons, representing the interests of all the commoners of England. The colonists interpreted the British constitution as being a division between executive (royal) and legislative (Parliament).

Thomas Jefferson wrote of “many unwarrantable encroachments and usurpations, attempted to be made by the Legislature of one part of the empire, upon those rights which God and the laws have given equally and independently to all.”[14] He also suggested that “not only the principles of common sense, but the common feelings of human nature, must be surrendered up before his majesty’s subjects here can be persuaded to believe that they hold their political existence at the will of a British Parliament with authority over the colonies because the colonists have no power of punishment or removal of those representatives .”[15]

The colonists did not limit their thinking to the authority of representative bodies. They also began to theorize more about the nature of a constitution itself. James Otis, for example, suggested that a constitution should be fixed, and that the legislature should follow it. This, itself, was an extension of the thoughts of Edward Coke, who suggested that legislation should follow a set of legal principles. These men both left the argument there, supposing that any legislation that violated those principles, or that fixed constitution, would then be repealed by the legislature, but neither was prepared for the idea that the legislative body was itself subject to the law rather than the source of it.[17]

Samuel Adams was willing to carry this argument to its logical conclusion. In 1768 he wrote, in behalf of the Massachusetts House of Representatives, that “the constitution is fixed; it is from thence that the supreme legislative as well as the supreme executive derives its authority.” William Hicks, of Pennsylvania would write that the constitution could not come from a legislative body because anything that could be created by a law could be undone by one, but a fixed constitution would always remain fixed. John Joachim Zubly carried this a set further by stating that the legislature could not make laws that went against the constitution because its own power was set by that constitution.[18] The colonists did not limit this constitutional argument to the legislature either, but instead extended it to the king.

In 1766 John Dickinson wrote that rights were not granted by the king and could not be taken away by any act of government. Even Magna Carta was merely an affirmation of these rights rather than being the instrument by which they were granted.[19] Thomas Jefferson went so far as to declare that the king was “no more than the chief officer of the people, appointed by the laws, and circumscribed with definite powers.”[20]

The Declaration of Independence was a culmination of these arguments. It combined each of the constitutional arguments in the form of a list of grievances against the King and against Parliament. By listing each of the ways that the King or Parliament had violated or refused to honor the colonists as Englishmen they could justify their independence.[21]

The colonists had grown worlds apart from the English idea of constitution and could not come to any solution where the Parliament in London gained power over them. They had been left alone for too long in an environment where the King and his government had neglected the maintenance of their power and had learned that they were quite capable of governing themselves. The British Parliament could not accept full autonomy for the colonies, even though the colonists had developed a version of it and they were not willing to give it up. They had developed their republican sentiments far beyond those that existed in England and, therefore, complete independence was absolutely necessary.

[14] Thomas Jefferson, “A Summary View of the Rights of British North America,” The American Revolution: First-Person Accounts by the Men Who Shaped Our Nation, T.J. Stiles, ed (New York: Perigee, 1999), 47.

David Edwards hold an M.A. in history from the University of Idaho. His thesis, News Reporting or News Making?: the role of the press in the American Revolution looked at the extent to which colonial newspapers influenced reactions throughout the colonies to the Stamp Act and Massachusetts’ response to it.