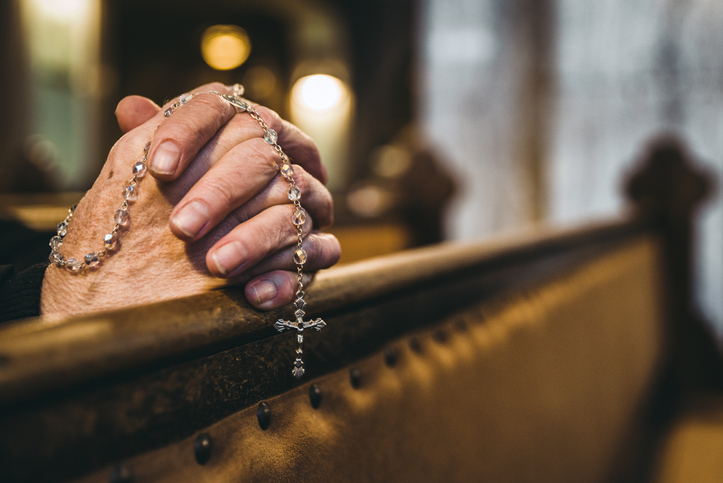 “The difficulty of explaining ‘why I am a Catholic,’” wrote G.K. Chesterton in 1926, “is that there are ten thousand reasons all amounting to one reason: that Catholicism is true.”

If indeed what the Catholic Church teaches is true, that should be reason enough to accept it—for a libertarian as much as anyone else. After all, libertarians are truth seekers by our own lights. Research spearheaded by social psychologist Jonathan Haidt has found that we tend to “have a more reasoned cognitive style” than do conservatives and progressives. Thus, if you could be rationally convinced that the tenets of the Catholic faith (or any other faith, for that matter) comported with objective reality in its richest sense, wouldn’t intellectual consistency require that you convert?

Still, as a libertarian, you might understandably be concerned with the question of whether your pre-existing political and philosophical commitments are compatible with Catholicism. I’m here to put your mind (at least partially) at ease: It’s perfectly possible to be a committed libertarian and an orthodox Catholic. As managing editor of Reason magazine as well as an active parishioner at the Cathedral of St. Matthew the Apostle in Washington, D.C., I should know.

As with any big-tent movement, libertarianism can take a variety of forms; we obviously do not always agree with each other. The Church’s teachings reinforce certain libertarian varieties and exclude others outright. Catholic libertinism, for instance, is surely a contradiction in terms. But there is no inconsistency between libertarian political philosophy per se and faithful Catholicism. In fact, there is much in Catholic history and doctrine to commend it to the kind of person who has already found his way into the libertarian pavilion.

Yes, But What Kind of Libertarian?

Secular libertarians can be forgiven for worrying that Catholic positions on social issues are simply too far afield to be reconciled with libertarianism. The Church is staunchly pro-life, opposes pornography and prostitution, warns against drunkeness (though not against drinking if done in moderation!), and considers premarital, extramarital, and gay sex to be sinful.

We should start by noticing that the two sets of positions I just outlined refer to different things. The Church’s views are usually about a behavior’s moral status, while the libertarian stances are about the behavior’s legal status. (Abortion is a special case, so let’s set that aside for now.) In some cases—as with murder, for instance—most people believe the moral status should determine the legal status. (To the extent that a libertarian thinks the state has any valid role at all, that role includes enforcing a prohibition on homicide.) But in other cases, those judgments are clearly distinct. Consider adultery: Nearly everyone agrees that cheating on your spouse is wrong, but hardly anyone thinks it would be a good idea to have armed law enforcement officers raiding bedrooms and hauling away philanderers.

Libertarian Catholics take the subtle but important distinction between immoral and illegal and apply it to a much broader array of issues. That is how I can both accept the Church’s teaching on prostitution, say, and nonetheless oppose laws that attempt to force others to act accordingly.

This solution works best if you, like me, consider libertarianism to be a theory of government and nothing more. As Charles W. Johnson explained in a now-famous 2008 essay, some people think libertarianism brings with it certain “religious, philosophical, social, or cultural commitments” squarely outside the realm of public policy. But as I argued in a 2018 debate, I think libertarianism is best understood as a political philosophy—i.e., a set of ideas about the proper role of the state, that entity Max Weber defined as holding a monopoly on violence. It’s just not equipped to answer questions about how to “live well” in the private sphere.

Which brings me to the abortion debate. There’s a good reason this issue has been a source of tension among libertarians for as long as there have been libertarians: The “correct” position depends on a very big question for which our political philosophy doesn’t have an answer—namely, “When does human life begin?” As I mentioned earlier, libertarians generally agree that the state, if it has any legitimate role at all, exists to protect innocent life. But as I put it at Reason in 2015, “The philosophy of liberty simply cannot speak to whether abortion is an act involving one human being or two. For that, you have to look elsewhere—at science or experience or religion or tradition or intuition or a combination of all those things. How you answer the question will determine your starting point. Libertarianism can only show you where to go from there.”

In any case, abortion—because many of us see it as an act of aggression—is an exception to the rule. Most of the time, when Catholicism and libertarianism appear to be at odds, the conflict disappears the moment you realize it’s possible to accept traditionalist beliefs (and even work hard to live by them) without seeking to impose those views on other people through legislation. Even St. Thomas Aquinas, a “doctor of the Church,” wrote in his Summa Theologica that human laws forbid “only the more grievous vices…and chiefly those that are to the hurt of others, without the prohibition of which human society could not be maintained.”

Some 293 years before Adam Smith published his Inquiry into the Nature and Causes of the Wealth of Nations and 491 years before F. A. Hayek won his Nobel prize in economics, Francisco de Vitoria was born. Libertarians arguably have as big a debt of gratitude to him as we do to either of those later heavyweights of free-market thought. Vitoria was a Spanish-born Dominican friar and moral theologian. But he and his compatriots were some of the first to systematically employ and defend what we might now call the economic way of thinking.

As Alejandro A. Chafuen writes in Faith and Liberty: The Economic Thought of the Late Scholastics, Vitoria was “the Father of the Hispanic Scholastics.” These Catholic thinkers—sometimes colloquially known as the School of Salamanca, because many of them, beginning with Vitoria, were based at the university there—examined sticky questions such as “what is the ethically correct price of a given good or service?” and “is it acceptable under a Christian framework to pursue profits in the sphere of business?”

Because of their deep commitment to “rational investigation” (sound familiar?), Vitoria et al. would study a question from all sides, keeping both practical and theoretical considerations in mind. Among other things, they concluded that “it is impossible to achieve abundance in a common property system” since “everyone will expect the others to do the work.”

The parallels to libertarian thinking are obvious, but these insights also show up in official Church teachings. In 1891, Pope Leo XIII wrote that “the sources of wealth themselves would run dry, for no one would have any interest in exerting his talents or his industry; and that ideal equality about which they entertain pleasant dreams would be in reality the levelling down of all to a like condition of misery and degradation. Hence, it is clear that the main tenet of socialism, community of goods, must be utterly rejected, since it only injures those whom it would seem meant to benefit, is directly contrary to the natural rights of mankind, and would introduce confusion and disorder into the commonweal.” It’s hard to imagine a more eloquent defense of private property or a more forceful condemnation of socialism than that.

The Hispanic Scholastics made similar contributions on other economic questions as well, Chafuen writes. They determined that “it can never be good to debase currency”; that “eternal, natural, and positive law…favors international trade”; that “price controls were extremely inappropriate and harmful”; and that “the just wage [is] the wage established by common estimation”—by the operation of the market, in other words—“in the absence of fraud.” It is striking, Chafuen points out, that “these medieval thinkers constructed price and value theories remarkably similar to neoclassical models.”

As you can see, the ideas developed by the Hispanic Scholastics were passed down through the centuries, eventually coming to influence Adam Smith and many others. In a real sense, libertarians are intellectual descendants of the Salamanca School. I’d be lying if I told you the teachings of the Church are synonymous with classical liberalism. But there’s no denying that a sophisticated strain of free-market thinking grew directly out of the medieval study of Catholic moral theology.

On the ‘Dignity of the Human Person’

According to the United States Conference of Catholic Bishops, “We believe that every person is precious, that people are more important than things, and that the measure of every institution is whether it threatens or enhances the life and dignity of the human person.”

The phrase “dignity of the human person” might sound a bit funny to secular ears, but it is nothing less than pervasive in modern Catholic social thought. As the Catechism of the Catholic Church puts it, “Respect for the human person entails respect for the rights that flow from his dignity as a creature.” Note that this is not far off from how libertarians tend to talk. Cato Institute’s own David Boaz puts it in his book The Libertarian Mind, “libertarian thought emphasizes the dignity of each individual, which entails both rights and responsibility.”

For many libertarians, human beings’ inherent dignity is directly connected to ideas about the importance of individual freedom. That’s also a major theme in the Church’s teachings. To quote the Catechism again, “God created man a rational being, conferring on him the dignity of a person who can initiate and control his own actions…. Freedom is the power, rooted in reason and will, to act or not to act, to do this or that, and so to perform deliberate actions on one’s own responsibility.”

Since the Second Vatican Council, the Church has placed a particular emphasis on religious freedom. In 1965, Pope Paul VI wrote that “all men are to be immune from coercion on the part of individuals or of social groups and of any human power, in such wise that no one is to be forced to act in a manner contrary to his own beliefs, whether privately or publicly, whether alone or in association with others, within due limits.” To be clear, this position does not imply that every form of worship is equally valid. To the contrary, conscience protections are necessary so that Christians can freely fulfill the obligations of the “one true religion” subsisting “in the Catholic and Apostolic Church.” But it does imply that the option of rejecting the faith entirely must be kept legally available. Anything less would be a crime against human dignity.

Under a Catholic anthropology, that dignity is rooted in a belief that goes all the way back to the first chapter of the first book of the Bible: “God created mankind in his image.” Stated otherwise, God made us to be like Him. He allowed us to share in His rationality and gave us dominion over earthly creation. Perhaps most crucial of all, He chose to bestow the great gift of free will on us, despite knowing we might use it to do things He would not like.