A brief history of the libertarian roots of feminism, and an introduction to a rotating column discussing libertarian feminism. 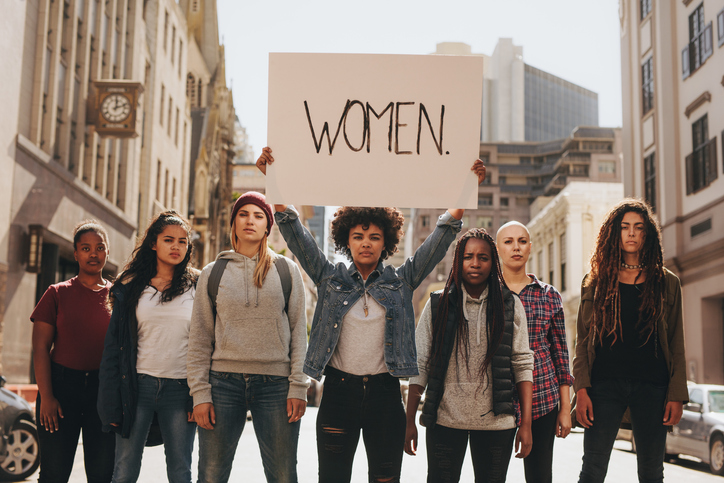 Libertarian feminism is part of an honorable individualist tradition in America. Contrary to what some may think, the first feminist activists were not socialists, they were individualists and libertarians. Though women have been resisting the State for centuries, the first explicit resistance to oppression of women started with individualist Mary Wollstonecraft in England and Judith Sargent Murray in 18th century America. Wollstonecraft was a big influence on the American individualist feminists like Elizabeth Cady Stanton and other suffragists. When Elizabeth Cady Stanton, Susan Brownell Anthony and Matilda Joslyn Gage wrote their 1881 history of the women’s movement, Wollstonecraft was the first of the “foremothers” to whom they dedicated it.

The 19th century American individualist anarchist feminists were writing long before the socialists. Many of them were active within the sex radical movement which declared that whom one loved was no business of the State. Ezra Heywood (1828-1893), with the help of his able wife Angela (b.d. and d.d. unknown), founded the first anarchist sex radical journal The Word in1872 to explicitly examine “the abolition of speculative income, of woman’s slavery and war government.”

The most well-known and perhaps the most influential of the sex radical publications was Moses Harman’s Lucifer: the Lightbearer (1883-1907). A mild-mannered widower whose own personal life was above reproach, Moses (1830–1910) was not just a sex radical but an anarchist, feminist, and freethinker. Lucifer, with Moses’s daughter Lillian as compositor, continued the discussion of “the Woman Question” (as feminism was then called) that the Heywoods had begun. Over the course of its 24 years, it examined the issues of traditional institutional marriage, calling for the economic independence of women, and discussing the then-unheard-of issue of marital rape and much more.

Lillian Harman (c.1869-?) was a feminist firebrand and sex radical in her own right. When she married her anarchist colleague Edwin Cox Walker without the benefit of a state license in 1886, they became a cause celebre in anarchist and free love circles. The wedding ceremony was radical, even by today’s standards. Lillian declared that she would retain her own name, as she thought it her “duty” to do, while Moses, though approving of the wedding, declared that he did not “give away” Lillian because she was her own person.

The other major outlet for the promulgation of what was then called “the Woman Question” was Benjamin Tucker’s individualist anarchist journal Liberty. Though Liberty was not as explicitly oriented toward women’s rights as Lucifer, in the 1880s it did devote considerable space to the “sex question.” The most prolific feminist writer in Liberty was Sarah E. Holmes (1847-1929). The principal writer on sexuality and marriage in the 1880s, she was a radical feminist who went beyond even the standard anarchist call for abolition of institutional marriage.  Holmes, like Voltairine de Cleyre in the next decade, argued against couples living together in arrangements where domestic responsibilities were based on traditional sex roles.

A number of feminist books originally printed elsewhere were serialized in Liberty. In addition to Stephen Pearl Andrews’s treatise on marriage and divorce, Tucker’s translation of the Russian revolutionary nihilist classic What’s to Be Done? by N.G. Tchernychewsky first appeared in serial form in 1886. “The fundamental idea of Tchernychewsky’s work,” wrote Tucker in the preface, “is that woman is a human being and not an animal created for man’s benefit, and its chief purpose is to show the superiority of free unions between men and women over the indissoluble marriage sanctioned by Church and State.”

However the most famous of the individualist anarchist feminists was Voltairine de Cleyre (1866 –1912). Though she later declared herself an “anarchist without adjectives,” her individualist spirit continued. Her essay “Sex Slavery” was the most systematic statement of the social construction of gender (before such a term even existed) since Sarah Grimke’s essays in Letters on the Equality of the Sexes and the Condition of Women in 1837. Though she was not alone in this belief, many mainstream feminists and most male anarchists bought into the traditional stereotypes of women as weaker and softer and whose primary role was in the home. This radical aspect of her ideas has been insufficiently appreciated, even by people who are familiar with her. Some of her best essays are now available in print in Exquisite Rebel: The Essays of Voltairine de Cleyre.

After the death of Voltairine de Cleyre, libertarian feminism fell into obscurity. Only one woman carried on the tradition in early 20th century America—Suzanne LaFollette (1893-1983). Her book Concerning Women (1926), is the first full-length exposition of modern libertarian feminist thought and the only one during her time. Her colleague, friend, and mentor, the essayist and editor Albert Jay Nock, called it “superb.” Of this book, Nock wrote, “at every turn, throughout the future, until freedom is attained, this book will be dug up and drawn upon, like Mary Wollstonecraft, but more effectively, as saying the final thing.”

By the 1970s only a handful of libertarian women and men spoke out on libertarian feminist ideas, its heritage seemingly forgotten. However Tonie (Theodora) Nathan (1923-2014), an Oregon journalist, changed that. In 1973, she founded the Association of Libertarian Feminists (ALF) in her hometown of Eugene, Oregon. At the Libertarian Party Convention in New York City in 1975, the national ALF group was founded. Its website came along in 1997. The essays there include “Government Is Women’s Enemy,” a statement that explains libertarian feminism, separating it from mainstream feminists who advocate the use of government to help women.

In 1992 libertarian feminist Joan Kennedy Taylor (1924-2005) published the book Reclaiming the Mainstream: Individualist Feminism Rediscovered, a history of individualist feminism in the US that showed that the feminist tradition in the US was largely individualist in the 19th century. Her book What to Do When You Don’t Want to Call the Cops: A Non-Adversarial Approach to Sexual Harassment was published in 1999 with Cato sponsorship.

As ALF’s Executive Director, I am pleased to report that ALF continues its activism today with a Facebook page, newsletters, essays, a blog, and a YouTube Channel, which will soon have new interviews.  We expect to publish a libertarian feminist anthology in 2015.

Another part of ALF’s continued activism is a new rotating libertarian feminist column for libertarianism.org, of which my essay today is a part. Economist Mikayla Novak started it off with her piece on feminism and economics; lawyer Helen Dale and editorial writer Elizabeth Nolan Brown will soon follow. The four of us will cover a range of issues relating to libertarian feminism: not only libertarianism’s feminist heritage, but also about the links between feminism and Austrian economics, why other schools of feminism often seem so attracted to state power, and why libertarian men—especially in the US—have to take reproductive rights very, very seriously. We’ll also tackle the issue of the libertarian gender gap with the benefit of viewpoints from the UK and Australia, where the gap is less of a problem than in the US.

My co-columnists and I are excited to expand upon libertarian feminism’s honorable and radical legacy, moving it forward into the 21st century.

Sharon Presley, Ph.D. is the Executive Director of the Association of Libertarian Feminists and co-editor of Exquisite Rebel: The Essays of Voltairine de Cleyre.  She is editor of Libertarianism and Feminism: Individualist Perspectives on Women, Men, and the Family, an anthology in progress. As a social psychologist, her specialties are gender studies and obedience and resistance to authority. A long-time libertarian activist, she is the co-founder of Laissez Faire Books. Her articles have appeared in Reason, Liberty, and other libertarian magazines.