How did Ethiopians remain independent while Europeans carved up the rest of their continent?—with a culture of resistance fifteen centuries old. 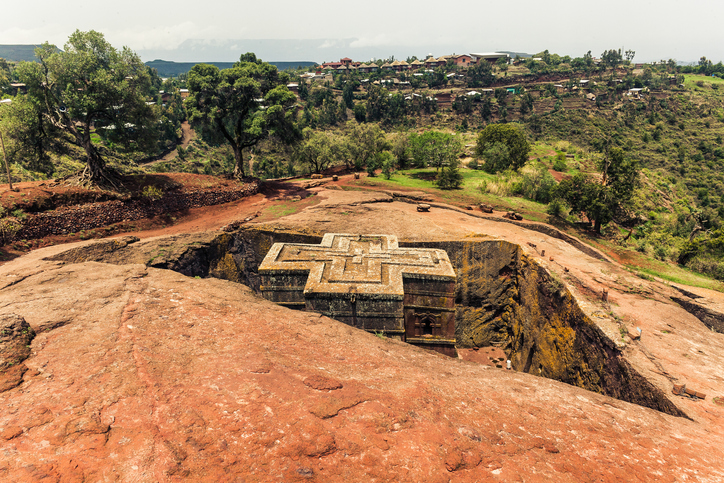 History of Resistance in Ethiopia: The Early Societies and Religious Freedom

In the course of studying the history of medieval Africa, I discovered that there are pockets of events and recurring narratives that defy many of the standard philosophical and historical accounts of pre-colonial African societies. Most writers of African history are guilty of describing ancient Africans as absolutely subordinate to powerful monarchs, fragile societies that lacked many or most social values one can describe as liberal. As more recent treatments of African history show, though, the continent has endless examples of liberal values with deep roots and significant implications.

Historians have often gone awry by attempting to define and describe African social principles without an extensive consideration of their peculiarly African dynamics. One such confused social principle is ‘self-determinism’. There is no obvious or single way to determine whether a society is deciding its own destiny, nor is it entirely clear how we could ever know this. In traditional African societies, people governed themselves in an endless variety of ways and different sources of authority interacted with one another to determine the extent of social freedoms. When outside societies attempt to impose their own value standards on African history, they will almost certainly misunderstand and misrepresent that history.

The earliest Africanists did not consider these factors and gave many readers false knowledge about indigenous African societies. But they were right about some things—Like the idea that monarchs represented the gods (or the divine) on earth, and often wielded power over life and death. At the same time, though, we know that regular people and subordinate social institutions usually determined the extent to which freedoms were preserved. The power of the monarch and other social institutions often possessed legitimacy only so long as they provided the bulk of people under them with some sense of self-determination and if they governed in the public interest. In what is perhaps the most fascinating of these examples from early African history is the long story of how ancient mercantile societies in the 5th century BCE metamorphosed into modern-day Ethiopia, the only African nation to successfully defeat an imperial power during the scramble for Africa in the 19th century.

Ethiopia did not simply achieve this remarkable feat overnight; it was the result of a long-cultivated attitude of resisting internal and external penetration against existing social orders like the Orthodox Church. Although the Ethiopian Empire itself was for most of history, an absolute monarchy, still, the people and the Church were always strong factors determining the course of their own history.

The earliest known organized religion in ancient Ethiopia (as in many pre-Abrahamic societies) was a kind of paganism, in this case borrowed from Southern Arabia. Evidence of this religion is found in the remains of the D’mt Kingdom and the Temple of the Moon, both in the Tigray province of Northern Ethiopia. The temple was erected in the 5th century BCE - about the same time Pericles built the Parthenon in ancient Greece - which gives credence to a long tradition of religious devotion among early Ethiopians.

Although there are fewer details about the relationship between the D’mt society and the religion practiced at the Temple of the Moon, historians do believe that the religion was not forced on the D’mts but came through migration and trade.1 A few centuries later, Judaism reached Ethiopia. According to some Hebrew accounts, Beta Israel2 tribes were the first Ethiopian Jews, and they migrated from Egypt between 39-31 BCE. They found refuge in the Ethiopian kingdoms and formed a part of their social structures despite some instances of persecution. For centuries, Judaism coexisted with paganism until the institutionalization of Christianity in 330 CE.

Christianity first reached Ethiopia through the Kingdom of Aksum - a mighty state that succeeded the early D’mt Kingdom - through two boys, Frumentius and Aedesius. Pirates killed the boys’ father (a Syrian Christian) while he was traveling with the boys from India along the Red Sea. Frumentius and Aedesius found rescue and somehow ended up in the palace of King Ousanas of Aksum. They eventually lived in the palace and educated the prince, Ezana, on the principles of Christianity.

After Ezana assumed power, Frumentius convinced him to accept Christianity as the state religion in 330. Some historians dispute Ezana’s motivations, though, linking his conversion to the geopolitics of the time. In Rome, the Emperor Constantine converted to Christianity in 312 CE and Ezana’s institutionalization of orthodoxy in Ethiopia marked his country as the second (after Armenia) to make Christianity a state religion. However, before Ezana, Christianity had always founded sparse acceptance in Aksum. Many Christians that fled the Diocletianic Persecutions - the last and most brutal persecution of Christians in the Roman Empire - came to commercial ports along the Red Sea including Adulis in Aksum. Adulis was a prosperous trade route that linked the Horn of Africa to the rest of the world. In fact, there is archaeological evidence that proves it was a key element in international trade during this period.

In a manuscript published around mid-1st century CE, titled Periplus of the Erythraean Sea - reproduced by Wilfred Schoff in 1912,3  an unidentified traveler described this remarkable trade route that served ivory and hides to the East accompanied by migrants with their religion. Aksumites accepted many of these migrants and for the next six centuries, Christianity took root in Ethiopia with many of its doctrine defined in the Empire. And by the 7th century during the spread of Islam from Southeast Asia to the Horn of Africa, successive Ethiopian generations fought against religious impositions from abroad. But the key events that shaped Ethiopia’s resilience against domination did not happen until the early 13th century when Islam gained global prominence, reshaping the course of medieval history.

Struggles with the Muslims in the 13th Century

Thirteenth century Ethiopia was a feudal society. Its structure can be compared to that of medieval European monarchy with autonomous provinces under a powerful emperor. The Orthodox Church was the heartbeat of the empire and held some degree of freedom for the primary function of religious guidance. It was one of those societies where the monarch derived his strength from the loyalty of feudal lords while the public retained some power to influence their leaders.

Around this time, most of Ethiopia’s neighboring territories fell to the conquering force of Islam. Among them was the Sultanate of Ifat, ruled by the Walashma dynasty. The Walashma sultans were known for propagating Islam throughout the Horn region while Ethiopia seemed an unconquerable entity. There were occasions when both got engaged in wars over territory, but the Ethiopians believed it was only a matter of time before their defensive policy would fail under constant threat of invasion so they became expansionist themselves. They defeated the Walashma sultans in 1332 and suppressed their political and military power.

In the late 14th century, the defeated sultanates reconstituted themselves as the Sultanate of Adal, which was far more powerful in part thanks to its deep commercial and political relations with the Ottoman Empire. The Ottomans were Muslims and this was at the peak of their military capacity. This was also a period when Christians and Muslims competed for supremacy across the old Byzantine Empire, and the Ottomans knew that if an important Christian kingdom like Ethiopia was captured, Islam would have easier entry to Africa through the Horn to advance their trading interests.

For 200 years, both Ethiopia and Adal were logged in constant conflict over religious and sometimes commercial control of the Red Sea. However, in 1533, Adal captured central Ethiopia and seized strategic cities. Interestingly, throughout this campaign, most Ethiopians refused to give up their faith even at the point of death. The Adal armies killed many Ethiopians, burned churches and monasteries, and forced conversions. But the young Ethiopian emperor, Dawit II, would not surrender to Adal; he retreated inward to put up the last fight.

Dawit sought help from fellow Christian monarch, King John III of Portugal. This was an easy call for the young emperor since bilateral relations between the two monarchies had strongly matured decades earlier, especially towards the end of the 15th century. There were reciprocal diplomatic moves and reciprocal trading interests. Ethiopia was interested in firearms and employing Portuguese artisans in its efforts towards modernization, while Portugal always wanted Ethiopia’s raw materials for its growing industries. It was a trade-centered relationship, but Dawit’s decision to take it further than that opened the way for imperial European meddling with Ethiopians’ primary source of identity: the Orthodox church.

Dawit had reason to believe Portugal’s help would be in good faith to defend Christianity. Of course, the Portuguese were interested in defending such a kingdom with great importance to the history and formation of the Christian faith. However, unknown to Dawit, King John II and his advisors had other, less pure motives. Portugal actually intended to liberate Ethiopia to serve a warning shot to fellow superpower, the Ottoman Empire, in the ongoing struggle for global dominance between Islam and Christianity. What’s more, they intended to impose Catholicism on Ethiopians in place of Orthodox Christianity, which the Catholics long considered heretical. If the Portuguese were part of a grand religious mission to spread Catholicism and smash heresy, then the Orthodox Ethiopians were a target just as much as the Ottomans.

The Portuguese did help Ethiopia defeat Adal in 1543, and this newfound relationship between the two monarchies opened Ethiopia to the wider Christian world. There were new arrivals of European Christian merchants, Catholic missionaries and significantly, a Jesuit mission in 1557, led by Andrés de Oviedo. The Catholic mission was direct in its strategy to overtake the Ethiopian ecclesiastical hierarchy. The initial plan was to penetrate the empire’s political structure by creating relationships with the royal court and nobles, then destroy the bond between the Ethiopian Orthodox Church and its inspiration, the Alexandrian Coptic Church in Egypt.4 The Portuguese believed this was a necessary diplomatic move because the Ethiopian church derived its legitimacy from the Egyptian Coptic Church dating back to the 4th century when Frumentius became Ethiopia’s first bishop, anointed by St. Athanasius the Apostolic, the 20th Pope (or bishop) of Alexandria. It was a fundamental bond between non-Catholic churches that the Jesuits must break before the Ethiopians would submit to Rome. As planned, Oviedo found an audience in the royal court and engaged the Ethiopian Orthodox Church on doctrinal issues. He failed to flip the church’s allegiances in large part because they simply would not have it—they would not change their identities simply because European Catholics were now here telling them they should. The Jesuit mission eventually had to abort and the Portuguese Ethiopia policy went with it—their Africa policy backfired and solidified Ethiopians’ image of themselves as members of an independent Christian Empire, firmly out of the reach from the Roman Church.

In my next column, we will apply this long pre-history of resistance to modern struggles against foreign imperialism in Ethiopia, the only African nation which retained its independence by twentieth century.

Ibrahim Anoba is the Editor of AfricanLiberty.org. He is an expert in the African political economy with deep interest in African philosophy and history.