In recent years, there’s been a lot of debate about why there aren’t more libertarian women. Pamela Stubbart argued, effectively, that there’s something funny about libertarians. Sharon Presley, in response, argued that libertarians are a bit funny when it comes to women.

Beyond that question is another, too. People who are interested in politics are untypical of the population, and political participation rates are in any case in steep decline across the OECD.

So there aren’t many political men, either.

Why don’t people care about politics? And why do men care less about it than they once did?

Since it’s clear people still care about many other things – the claim that we volunteer less than we once did has been decisively refuted – what is it about (modern) politics that puts people off?

Here is one suggestion.

If you’re going to win an argument or persuade someone to your point of view, it helps if you can tell a story. And by this I don’t mean any old story, but the sort of story that kept you awake at night as a kid, or made you cry, or made you afraid to turn the page because you were scared that one of your favourite characters was about to get killed. Turn your mind’s eye to the best cinema or theatre to get the same effect: stories with narrative arcs and characters about which you cared, passionately.

And think, too, of what happened when you read books or watched films that didn’t make you care. Don’t be afraid to admit that so-called ‘great literature’ can fail for this reason, too, especially as people’s tastes and values shift over time. I never got past Book III of Paradise Lost: the whole thing bores me rigid. A greatly respected literary critic friend of mine has never been able to finish Midnight’s Children. I can’t speak for her with respect to Rushdie, but Milton’s failure for me is that he doesn’t make me care about his characters or world. Indeed, the best summary I’ve found of my problems with Paradise Lost is an essay suggesting that the whole poem is like a bad comic book.

If Milton is hard for some modern readers, spare a thought for the person who has to tell an important story with numbers and graphs, and where words are often just a support act. I speak, of course, of politicians, who depend so often on social scientists and lawyers.

Scientists learnt long ago that elegant equations and mathematical proofs bought them nothing in the way of public approbation, so those scientists with a flair for language turned to the writer’s craft, to narrative. Richard Dawkins, Carl Sagan, Jane Goodall: all have written movingly about their disciplines, often in books that have sold hundreds of thousands or even millions of copies.

Social scientists and lawyers have been much slower to master narrative. People unaware of the ebb and flow of British intellectual history often think economics is called ‘The Dismal Science’ because economists are so boring, the civil service equivalent of accountants in the private sector. Lawyers have less excuse, as people with the best results in English and languages at school often head into the legal profession. Unfortunately, the ranks of writer-lawyers who address with beauty the discipline of law are thin: Cicero and Gaius among the Romans, Richard Posner and Lord Denning in modern times.

In short, as our ability to calculate has grown with technology, people who are members of that minority who like politics spend a great deal of time trying to persuade with numbers, in part because policy wonks find numbers impressive. Those numbers may measure indebtedness, or poverty rates, or welfare dependency, or immigrants.

And they will mean nothing to most people.

Andrew Norton (a ‘numbers man’ par excellence) sums up our preference for storytellers when commenting on a list of Australia’s ‘top public intellectuals’:

Despite the diverse interests and views of the people who made it to these lists, one striking thing is that they are dominated by storytellers and moralists. They are people who tell stories about some aspect of Australian and sometimes international life or history (eg on the latest list Blainey, Inga Clendinnen, Helen Garner, Robert Hughes) and/or moralisers (eg Robert Manne, Peter Singer, Clive Hamilton, Tim Flannery, David Marr).

Social scientists, people who use statistics to explain and advise Australia, are conspicuously absent. There are no economists on the ALR list (Hamilton has an economics PhD, but that’s not the basis of his public prominence). Politicians are also rare: Bob Brown and Carmen Lawrence, moralists both, and Barry Jones, a classic case of a good memory being confused with intellectual talent. Just two people on this list have any power beyond their own words to shape the world around them: Noel Pearson and one of my bosses, Glyn Davis.

He goes on to hazard a guess as to why this is the case:

The human brain is surprisingly bad at remembering numbers, and struggles to recall or even understand the analytical arguments that flow from them. Narrative is our more natural mode of understanding, and people respond better to thinkers who use it to convey their message. Similarly, right and wrong in the moral sense is something that people sense and respond to from a very early age, while right and wrong in a mathematical sense is hard to acquire and rarely provides conclusions that resonate. As Stalin is reported to have said, in one of his rare moments of insight, ‘one death is a tragedy, one million is a statistic’.

As Don Arthur points out, it’s even worse for the non-storytellers. There is empirical evidence that virtually all human knowledge is based on narratives arising from previous experience. He also observes that on the few occasions where economists and social scientists have broken out of the box and reached a wider public, they have thrown out their graphs and diagrams and gone in for the telling of stories. He nominates Milton and Rose Friedman’s Free to Choose and F.A. Hayek’s Road to Serfdom as signal successes in this: signal because so rare.

In recent years, the likes of Steven Levitt and Tim Harford have turned to narrative in order to convey some of the wonder of their discipline to a wider public, and to some extent, they’ve succeeded. Harford in particular has made economics seem cool, both through his column in the Financial Times and the books he’s written.

In The Undercover Economist, to take only one example, there’s an outstanding chapter called ‘How China Grew Rich’. In it, Harford seeks to explode the widespread view that sweatshops in developing countries are bad for the poor and ought to be boycotted: oppressive, unsafe, and unsanitary. His argument is nothing more and nothing less than the accepted view among economists across the spectrum, from Paul Krugman to Tyler Cowen to Steven Horwitz. Matt Zwolinski usefully summarises Harford’s case:

However, no matter how clear and reasoned is Harford’s account of China’s path to prosperity, it cannot compete with the picture I’ve included below, which takes one of our most moving narratives and condenses it into a one-shot visual grab of staggering power. 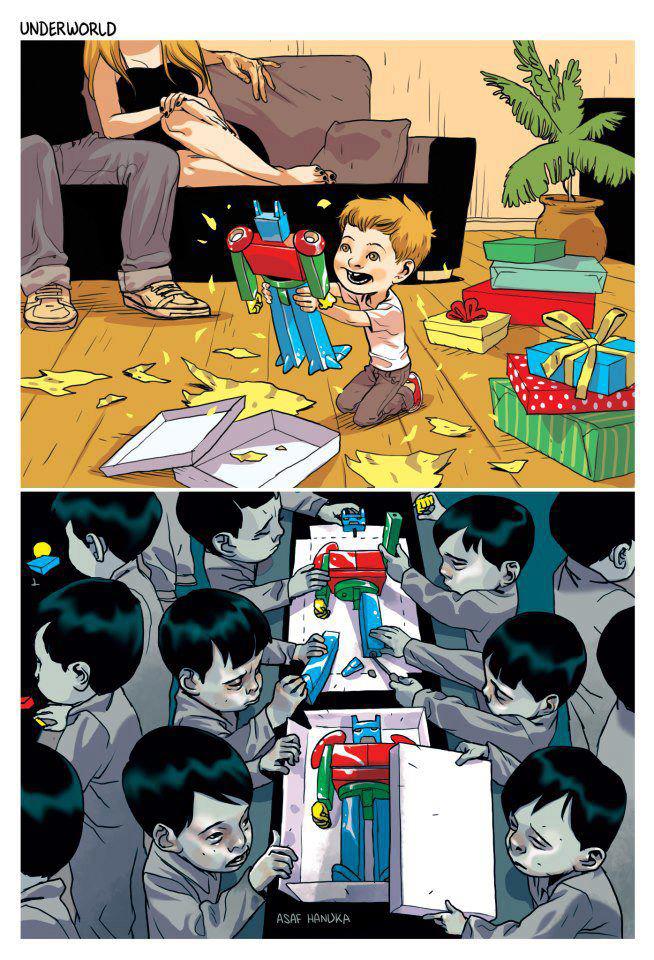 The narrative, of course, is A Christmas Carol, which has precursors in writers as diverse as Rousseau and Juvenal, all of whom wanted us to engage our moral sentiments when it came to thinking about people less fortunate than ourselves.

The politically inclined and policy wonks–with their numbers and graphs–may be right, but that picture is devastating, and cannot be gainsaid.

Is it possible to make numbers dance? Yes, it is. Here is Senator David Leyonhjelm using numbers to paint a picture in a speech. And here is Hans Rosling, making numbers tell a story, using technology.

It is, however, difficult.

If political participation is a game played largely by the numerate, then it will remain a niche interest among both sexes.

And that’s all right.

Helen Dale became the youngest winner of Australia’s premier literary award, the Miles Franklin, for her first novel, The Hand that Signed the Paper. Her second novel, Kingdom of the Wicked Book I - Rules, was released in October 2017, and Book II will be published in May 2018 (pre-order now). She read law at Oxford (where she was at Brasenose), and was Senior Adviser to Australian classical liberal Senator David Leyonhjelm.