What Theory Won’t Tell You About Public Goods 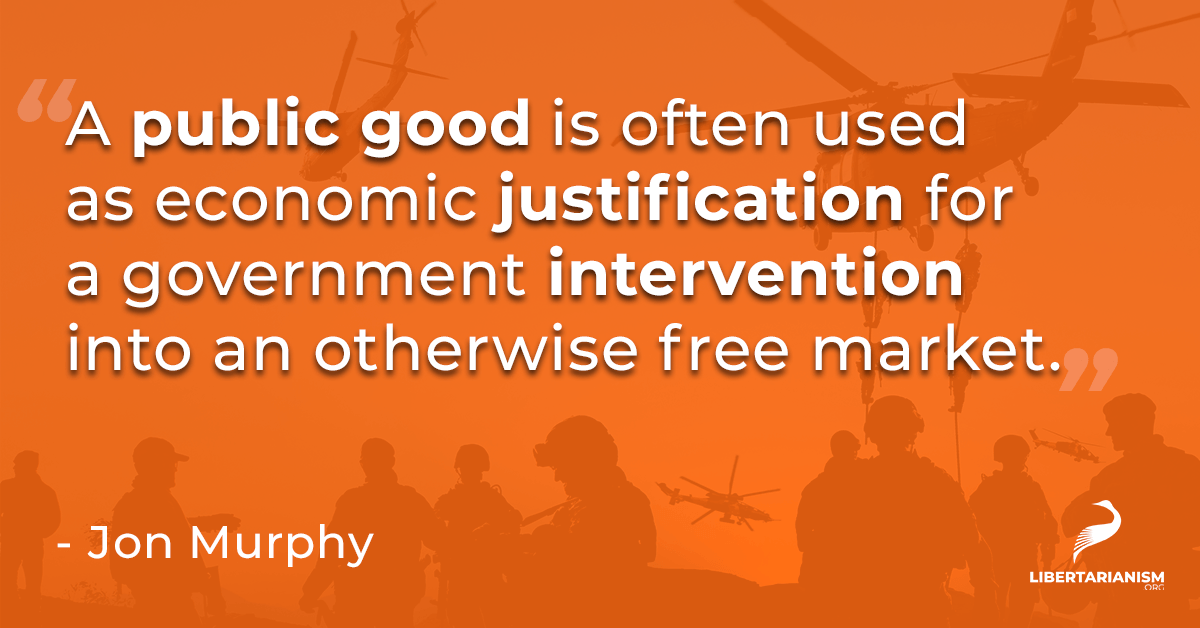 In 1954, the great economist Paul Samuelson coined the phrase “public good” as a means of describing what he called a “collective consumption good.”  Samuelson’s distinction began an important trend in economics: the classification of goods into one of four major categories: private goods, public goods, club goods, and common-pool goods.  This classification depended on two characteristics of goods, specifically their rivalry (whether or not one’s consumption of the good reduces another person’s ability to consume the good) and their excludability (the ability of the owner of the good to prevent use of the good by another person).  A good that is both rival (meaning one person’s consumption prevents another person from consuming the good) and excludable (meaning the owner can prevent someone from using the good) is a private good.  For example, an apple is a private good.  If you eat the apple, then I cannot eat that same apple.  Likewise, if you possess the apple, you can prevent me from eating it.  Conversely, a good that is non-rival (meaning one person’s consumption does not diminish another person’s ability to consume) and non-excludable (the owner cannot easily prevent others from using the good) is a public good.  For example, over-the-air radio broadcasts tend to be considered public goods.  If I tune into a radio station in my car, that does not prevent you from tuning into the same station in your car.  Likewise, if you are sitting in my car with me, I cannot easily prevent you from listening to my radio’s broadcast.  Club goods and common pool goods are the other two combinations of rivalry-excludability.  However, the focus of this article is on public vs. private goods, so I will defer a discussion on club goods and common pool goods at this time, although the issues discussed here will apply equally to them.

Given the difficulties owners of public goods have in preventing free-riding (the use of the resource without payment), Samuelson shows that public goods will tend to be underproduced compared to a socially optimal level: if not everyone who uses a firm’s product pays for it, the firm will produce less of it.  Thus, a government can step in and either directly provide the public good and pay for it through taxation (thus solving the free-rider problem), or subsidize production of the good funded, again, via taxation.  In either case, a public good is often used as economic justification for a government intervention into an otherwise free market.

Seems straightforward, right?  Just identify the public good and (if conditions warrant) subsidize it with tax money.  But how easy is it to identify a public good?  Do they exist or is it merely some theoretical “ideal” type?  Let’s attempt to answer this question by looking at the prototypical example used in textbooks: national defense.

National Defense as a Public Good

National defense is the quintessential public good.  In theory, it is non-excludable: if fighter jets are flying over my house protecting it from bombers, they are also protecting your house from bombers.  Further, it is non-rival: whether the fighter jet protects one person or one million, it costs the same.  Thus, in theory, if national defense were provided privately through competing firms, it would likely be underprovided.  We, then, have an economic justification for the role of government in providing a military for national defense.

But how much of a public good is national defense?  The answer depends, partly, on the scale at which we are looking.  If we only focus at a subnational level, national defense appears to be a public good: fighter jets just as easily protect Baltimore as they do Boston, and if Massachusetts is protected from invasion, for the most part Maryland is as well.  But if we expand the scope of our analysis beyond just the subnational unit, the classification becomes more difficult.  In a country the size of the United States, excludability comes into play.  If, for example, the entire US military was stationed on the East Coast, the West Coast would be very vulnerable to attack and the US government could choose to not defend it, thus excluding the West Coast from national security.  Given part of our criteria for a public good is non-excludability, this violates our classification rules.1

So, we see that expanding the scope of our analysis is sometimes enough to transform a public good into a private good.  The unit of analysis in economics often matters.  Our theory provides no guidance on what level of analysis to conduct—that is the job of the analyst.  But scope and scale are not the only problems we face when trying to classify economic goods.

Radio and free television broadcasts are also often touted as being public goods (which subsequently justifies the funding of some public broadcasts like PBS and NPR).  And back when anyone with an antenna could pick up on the broadcasts, this might have been a legitimate classification.  But, starting in the 1950s and really taking off in the 1980s, broadcasters began scrambling certain broadcasts and, in order to unscramble them, people had to buy cable boxes and pay a fee to the company.  Thus, with the invention of cable TV, broadcasts went from being non-rival and non-excludable to non-rival and excludable.  TV went from being a public good to a club good.

Another example comes from concerts.  In 2009, Bruce Springsteen came to the Xfinity Center in Massachusetts, an open-air amphitheater.  That show was, to put it mildly, a public good.  Not only did the fine folks in the amphitheater enjoy The Boss, but the folks in the parking lot and surrounding neighborhood did as well.  It was non-rival and non-excludable.  But it was only non-excludable because of the technology the owners of the Xfinity Center were willing and able to build into their amphitheater.  They could have installed higher walls or soundproofing materials, thus preventing any spillover of music.  They could have invested more in excludability technology, aside from merely just the ticket-takers and turnstiles.  But they didn’t, so The Boss was a public good.  A classification of a good depends on the technology available and accessible to the producer.

Is a Good a Good?

One final point that deserves more discussion than can be devoted here is the meaning of the term “good” in “public good.”  An economic good is, by definition, something where more is preferable to less, all else held equal.  In other words, it provides utility to the person consuming it.  A “bad,” however, is something where less is preferred to more, where there is disutility from consuming it.

The distinction between a good and a bad is not as clear cut.  Take, for example, the case of the concert.  Bruce Springsteen rocking out to “Thunder Road” may be great at noontime, but at midnight it might be less so.  As the music was non-excludable, some of the notes from the concert fell on neighboring houses.  If some of the households like rock, then they are free-riders, which is to say the concert is a good for them.  If, on the other hand, some of the households do not like rock but prefer a quiet, peaceful setting (or would rather hear rap) then the concert is a bad for them and they are suffering from a negative externality.  A negative externality means that the good is overprovided and incentives should be created to reduce the output.  And we find ourselves with a paradox: a public good is a good that tends to be underprovided, and thus incentives should be created to produce more of the good.  For certain households, the amount of the good on the market is too little, for others it is too much.  What a conundrum for policymakers!  Do they incentivize the production of rock concerts, treating it as a public good because it is non-rival and non-excludable, or do they tax the production of rock concerts because they generate externalities?  Theory provides no guidance on whether to classify the concerts as a public good or as a negative externality-generating enterprise.  Again, it all comes down to the analyst.

For the analyst, any discussion of economic welfare and classification must ultimately come down to a discussion of aesthetics and morality, to paraphrase Frank Knight.  Analysts may simply impose their own value system onto the situation; they love rock and thus the outdoor concerts are public goods.  Of course, few analysts do this outright.  Rather, analysts may look to current conventions in a certain area; how do people currently and actually behave?  Do people treat the outdoor concerts as public goods or as public bads?  Do they hang out on their back decks listening to music (public good) or have they installed sound-proof windows in their homes (public bad)?  How people actually behave can tell the analyst how they treat economic behavior.2

There is a way to resolve the paradox of classification: let people bargain.  If the folks who value the peace and quiet value it more than those who value the concerts, the former can bargain with the latter to build a wall.  And vice versa.  Either way, we have a solution.  Ronald Coase pointed this solution out in his seminal 1960 piece “The Problem of Social Cost.”  This point, which would later be dubbed the Coase Theorem by George Stigler, demonstrates the power of markets to overcome seeming paradoxes and develop solutions better than policymakers. The paradox of classification can be solved through bargaining, but the important note here is economic theory provides no objective guidance to policymakers on what economic classification should be applied (and subsequently what policies could be undertaken) to a given situation.

Economic theory is often touted as a tool that can guide policymaking.  There was a great debate in economics in the middle parts of the century on the ability of theory to guide policy and vice versa (see Don Lavoie’s excellent 1985 book Rivalry and Central Planning for more on this debate).  However, as we see here, even if we take the necessary knowledge and information needed as given, we still face a classification issue for guiding policy.  It is not as precise and accurate as the textbook models often suggest.  Rather, economic theory and classification is loose, vague, and indeterminant and often relies on the morals and aesthetics of the analyst and observer.  Thus, we should avoid what I have come to call economic casuistry, or the laying down of rigid rules for given situations (rules such as “if a good is a public good, it ought to be provided by the government” or “if something produces an externality, it ought to be taxed”).  Trying to shoehorn these rigid rules into fluid situations that require the analyst’s judgment, sense of morality and values, and observation and interpretation of events are unlikely to produce anything but confusion.