A Libertarian Perspective on the Modern American Welfare State

The American welfare state is expensive, of limited efficacy, and crowds out better options for alleviating poverty. 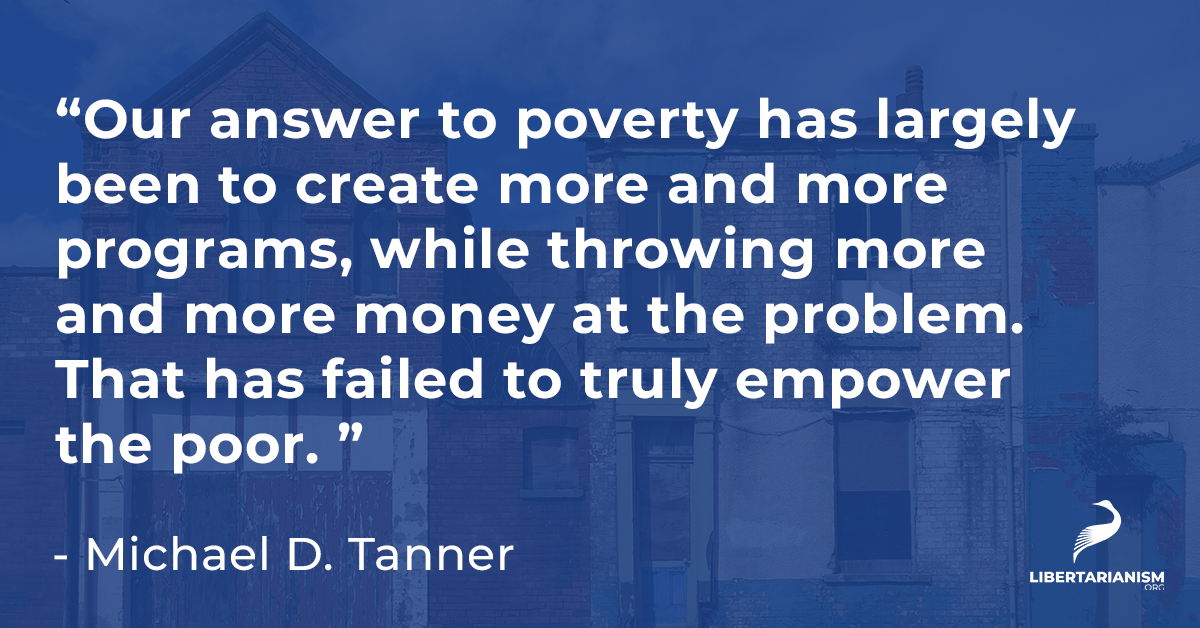 The US welfare state is much larger than commonly believed. The federal government alone funds and operates more than 100 anti-poverty or welfare programs, at a cost of more than $700 billion annually. State and local governments contribute an additional $300 billion to these programs, meaning we spend more than $1 trillion per year on welfare. In fact, since Lyndon Johnson first declared “war on poverty” in 1965, anti-poverty programs have cost taxpayers more than $23 trillion (on an inflation-adjusted basis).

The question isn’t whether all this spending reduced many of the worst deprivations of material poverty. Of course it did, and does. As George Mason University economist Tyler Cowen notes, under most classical economic theories, “a gift of cash always makes individuals better off.” $23 trillion is a huge sum of money by any measure. Regardless of how dim a view one takes of government competence in general, it would be virtually impossible for the government to spend $23 trillion without benefiting at least some poor people.

Measurements of poverty that fully account for welfare benefits, both cash and non-cash, show that the real poverty rate is far lower than the official census-bureau estimates.   And, even a quick eye test shows that the sort of deep poverty that was widespread as recently as the 1960s—where large numbers of the poor lacked electricity or running water, or where malnutrition was widespread—has been all but eliminated.

This has led some to argue for continuing or even expanding the welfare state. But that would be the wrong lesson to draw.  There remain ample reasons to question our current approach to fighting poverty.Among them:

The Welfare State is Unsustainable

Given the escalating cost of anti-poverty programs, it is fair to ask, even if those programs provide short-term benefits to the poor, whether they are sustainable into the future without seriously endangering economic growth. After all, one cannot redistribute wealth that doesn’t exist.

Even if welfare spending is a relatively small portion of overall federal spending, especially when compared with programs for the elderly like Social Security, Medicare, it nonetheless imposes a significant burden in the form of taxes or debt. Measured as a percentage of GDP, federal welfare spending has increased more than fivefold, from just 0.83 percent of GDP in 1965 to 4.4 percent today.

Moreover, even if future welfare spending can be accommodated without increasing debt or taxes, such spending will likely occur at the expense of other forms of government spending that are more likely to lead to economic growth. Most social welfare spending is pure consumption-based spending, rather than anything that could even tangentially be considered an investment.  As such, it is far less stimulative of future growth.

Finally, as Tyler Cowen points out, both the poor and taxpaying non-poor will reduce their labor force participation in a welfare state. As a result, future economic growth may be slower than it has been in the past. Any policy that encourages more otherwise-able workers to drop out of the labor force would further slow growth.

Hundreds of years of history show that a growing economy lifts more people out of poverty that any government program.  Yet, the welfare state perversely reduces that growth. This means not only more impoverished people in the future, but also fewer resources with which to provide welfare benefits. That, in turn, means higher taxes or debt, which will further slow growth, and so on, in a vicious cycle. Thus, even if we agreed that our current welfare policies were beneficial and wished to continue them, they may not be economically optimal.

The Welfare State is Bureaucratically Inefficient

As noted above, the federal government alone runs more than 100 anti-poverty programs. Some 70 of these provide benefits directly to individuals, while the remainder are targeted to low-income communities. On top of this, there are a multitude of state and local programs. These programs come with overlapping (and often contradictory) eligibility rules, work requirements, and other restrictions, rendering the American welfare state a patchwork system of unaccountability and opaqueness.

It becomes difficult, if not impossible, to determine which programs are effective and which are not, a problem compounded by their being overseen by at least nine cabinet departments, six independent agencies, and dozens of congressional committees.  Moreover, the systems complexity can mean that similarly situated individuals can receive wildly different benefits, based solely on their ability to navigate the system.  And, while fraud and abuse are smaller than many believe, there is still far too much waste and duplication.

The Welfare State Gets the Incentives Wrong

It seems obvious that a successful welfare state would promote—or at least not inhibit—behaviors that have been proven successful at lifting people out of poverty and reducing long-term dependence, notably work and marriage. However, our existing welfare programs too often create precisely the wrong set of incentives.

Take work, for example. The interplay of taxes, welfare benefits, and the costs of employment can mean that someone leaving welfare for a job faces some of the highest marginal tax rates of any group. As soon as an individual earns outside income, welfare benefits begin to phase out. At the same time, the new worker must now pay taxes (payroll taxes, for instance, start with the first dollar of income).  And, the worker will now incur expenses for such things as transportation, work clothing, and child care. In some states with very high welfare benefits, people can actually be left worse off financially in the short term by taking an entry-level job.

It is impossible to walk through many poor neighborhoods, from inner cities to isolated rural communities, and believe that our welfare system is working the way it should. These are areas where the government has spent heavily to reduce poverty. A high percentage of residents are receiving some form of government assistance. And as a result, the poor may well be better off financially than they would be in the absence of government aid. Yet no one could honestly describe those communities or the people living in them as thriving or flourishing in any sense of the word. By that measure, at least, our welfare programs are a failure.

Perhaps The Economist put it best:

If reducing poverty just amounts to ushering Americans to a somewhat less meagre existence, it may be a worthwhile endeavor but is hardly satisfying. The objective, of course, should be a system of benefits that encourages people to work their way out of penury, and an economy that does not result in so many people needing welfare in the first place. Any praise for the efficacy of safety nets must be tempered by the realization that, for one reason or another, these folks could not make it on their own.

If we were to consider welfare according to Maslow’s Hierarchy of Needs, we do a mostly successful job of tending to the base of the pyramid—people’s essential physiological needs. Nearly all Americans have food, shelter, clothing, and so on.  But the higher up the pyramid we go, the less our welfare programs accomplish. In the end, we do next to nothing to assist people with needs on the social, ego, or self-actualization levels.

That is because satisfying those needs requires a degree of autonomy and self-sufficiency that is compromised by reliance on government assistance. People cannot be said to have control over their own lives if they are perpetually dependent on others.

Adding to this, welfare programs are painfully paternalistic. The vast majority of welfare is provided not in the form of cash, but as “in-kind” benefits like food, housing, or health care. The government decides how the poor should budget or spend their money. Moreover, legislators often attach a variety of demeaning conditions to benefits. Work requirements are widespread, and might even be justified, but some state legislators also have attached restrictions preventing the poor from purchasing seafood or limiting the number of daily ATM withdrawals they can make.

There are Better Answers

Finally, we should recognize that welfare is not the only way to help the poor. It is possible to achieve similar or even greater levels of poverty reduction through other mechanisms.

For example, private charity is capable not only of dealing with material poverty but can often do a better job of dealing with underlying problems.  Americans, after all, are extraordinarily generous. In 2015, we donated $373 billion to charity. Roughly $265 billion of that, or fully 71 percent, was given by individuals (the rest came from corporations, foundations, and other organizations). More than 83 percent of adult Americans make some charitable contribution each year. True, a substantial portion of that giving went to entities like universities, hospitals, and the arts, rather than to direct human services to the poor. But even so, Americans voluntarily gave tens of billions of dollars to help the poor.  And it wasn’t just money. We also donated more than 3.2 million hours of our time. Roughly 65 percent of Americans perform some form of volunteer work. And that doesn’t include the countless hours given informally to help friends, family members, neighbors, and others outside the formal charity system.

Additional giving may be necessary to replace the welfare state, of course, but numerous studies have documented a “displacement effect,” whereby government programs crowd out private giving. For example, a comparison of charitable giving across countries confirms the finding that government welfare spending reduces private charitable efforts. Among rich countries, those with lower social expenditures as a share of the economy see a higher portion of their population donate to charity.

At the same time, other reforms—of education, of the criminal justice system, of barriers to economic participation—can reduce the need for welfare. Nothing will do more to reduce poverty than allowing the poor to become full participants in a growing economy.

Libertarians share a goal with those across the ideological spectrum: to reduce poverty and enable every American to rise as far as their individual talents will take them. Our answer to poverty has largely been to create more and more programs, while throwing more and more money at the problem. That has failed to truly empower the poor. There are better alternatives.

Michael Tanner is a senior fellow at the Cato Institute, where he heads research into a variety of domestic policies with a particular emphasis on poverty and social welfare policy, health care reform, and Social Security.