The common slogan that we must “get money out of politics”, when referring to campaign finance laws, has it backwards. 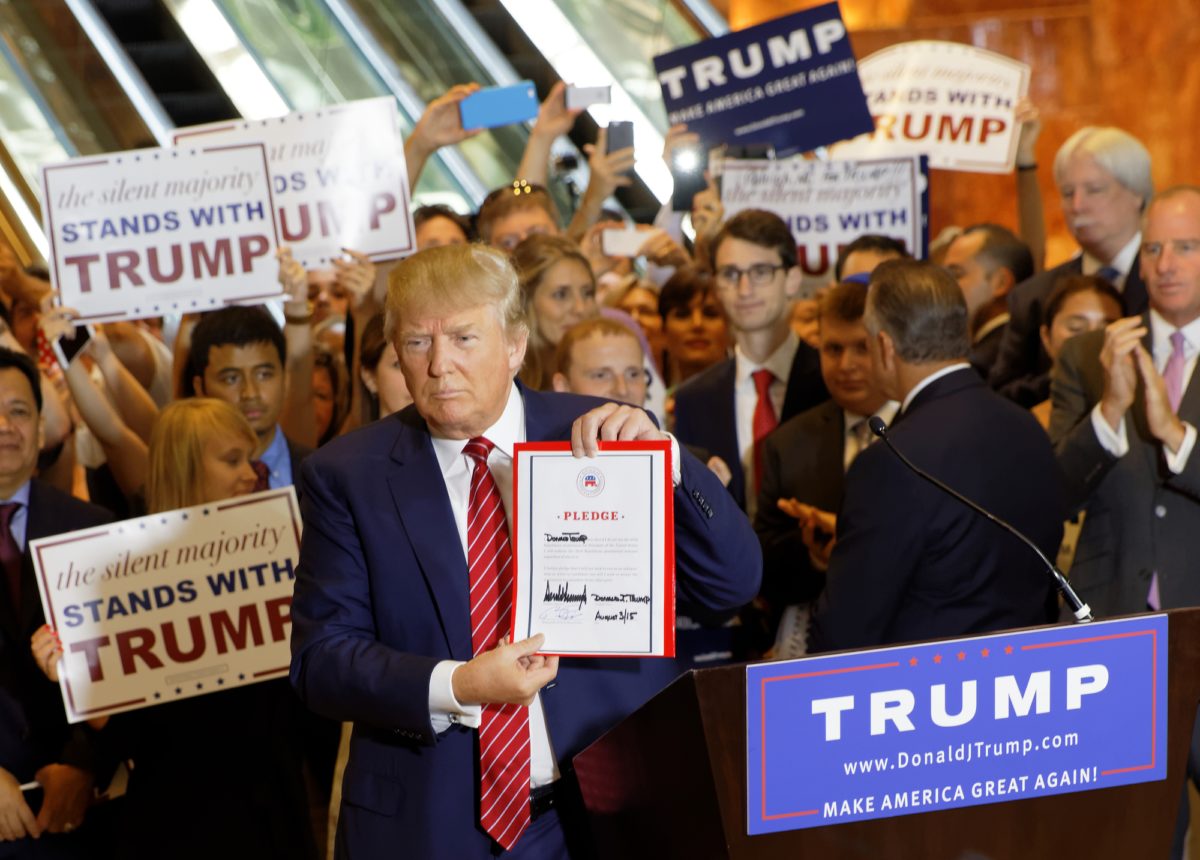 It seems clear enough that principled libertarians ought to at least sympathize with well-intentioned advocates of campaign finance reform, who seek to cleanse the political process of big money and the influence it buys (well, the influence it is thought to buy). After all, libertarians, too, want to insulate political decision making from pressure groups that would bend the law in their favor, hoping to extract special privileges and promote class legislation. In fact, free-market libertarians frequently grant, along with left-wing campaign finance reform activists, that politicians and bureaucrats are indeed unduly influenced by (even held in the pockets of) monied special interests—that these interests hold too much power in American political life.

As is so often the case, the two groups diverge sharply on the question of the correct way to remedy this problem, libertarians calling for a neater, more principled separation of politics and economics, the mainstream left calling for special limits on campaign contributions or even publicly funded elections. If “money in politics” is the overblown-but-stylish issue du jour, then “politics in money” is the unheralded-but-profound abiding evil. At the outset, it is important to make something clear: the idea that it could ever become possible to rid politics of money is akin to similar fanciful, if well-intentioned, ideas like free healthcare or free college education—which is to say that the idea’s proponents are unmoored from reality at a basic level. Prosecuting a political campaign costs money, an immutable fact for as long as advertising, travel, meals, and research, among many other aspects of campaigning, cost money. Thus, the admittedly pie-in-the-sky libertarian dream of abolishing politics altogether would actually be far easier than purging politics of money.

Nevertheless, obsessed with this chimera—“getting money out of politics”—many on the left champion publicly-financed elections in the hope of reducing the corrupting influence of corporate contributions. If public employees who choose to opt out of union membership cannot be compelled to contribute agency fees that fund political activities, then assumedly American taxpayers cannot be forced to finance campaigns. Yet whether such a public financing scheme could be carefully tailored to circumvent First Amendment pitfalls is an open question. Harvard law professor Lawrence Lessig suggests a “democracy voucher” system, whereby a small tax rebate would fund a contribution to a candidate of the taxpayer’s choosing (or else go “to his or her party, or, if an independent, back to this public funding system”). The question of such a program’s constitutionality would be decided, if at all, by nine super-legislators, the opinions of whom are bound to be rooted as much in their politics as in some imagined platonic ideal form of the First Amendment. The normative and empirical questions, then, are more important than the technical legal one.

U.S. cities like Seattle have instituted democracy voucher systems, with unintended (if not unforeseeable) consequences. Eric Peterson of Americans for Prosperity observes that “[i]nstead of helping lesser-known candidates, as supporters said it would, the vouchers simply propped up incumbents and those who already had substantial fundraising apparatuses.” What’s more, Seattle’s democracy voucher program has already attracted its share of fraud and corruption. (You don’t say.) Too often, well-meaning progressives either don’t believe that incentives operate no less within government institutions and programs than without, or they believe that incentives can simply be wished away if politicians make the right incantations (which is, practically speaking, the same). Libertarians are lazily assumed to oppose campaign finance reform and publicly financed elections because they are corporate shills who actually want big money and influence to dominate and control politics, to subdue the genuine will of the people. But both sides of the campaign finance reform debate would do much better to take each other’s stated goals and motivations at face value, turning to argument and empirical evidence to determine whether the goals as articulated are served by the policies proposed.

Available data suggest that the impact of campaign spending amounts on election outcomes has been overstated rather dramatically, that “buying an election,” as it were, is not as easy as left-wing diatribes against money in politics would have us believe. For example, most campaign dollars are allocated to advertisements, which available data strongly suggest are ineffective, especially so “in the races where campaigns spend the most on them — like presidential elections.” Advertising impotence notwithstanding, we find that political victory and money do tend strongly to accompany one another. But the mere fact that the candidate who spent the most money usually wins (about 90 percent of the time) can’t tell us whether this higher spending caused his election to office, for it could be that he was bound to win in any case. It may simply be the case that big money’s predictions of electoral victory are usually accurate; such bets are quite safe given that incumbents almost always win1—in fact, they win at approximately the same rate as the candidates who spend the most in any given race, which suggests, perhaps, that effective equalizing reform would seek to unshackle large donors rather than further limiting them. Libertarians have been wont to point out that incumbents tend to favor campaign finance reform measures for precisely this reason: just as major incumbent corporations frequently endorse packages of new regulations (styled as “reform” and “consumer protection”) as a way to suppress competition, so have incumbent politicians advocated “reform” measures that have a disproportionate negative impact on newcomers. Legal scholar Bradley A. Smith explains,

The key spending variable is not incumbent spending, or the ratio of incumbent to challenger spending, but the absolute level of challenger spending. Incumbents begin races with high name and issue recognition, so added spending doesn’t help them much. Challengers, however, need to build that recognition. Once a challenger has spent enough to achieve similar name and issue recognition, campaign spending limits kick in. Meanwhile the incumbent is just beginning to spend. In other words, just as a challenger starts to become competitive, campaign spending limits choke off political competition.

The strictures imposed by campaign finance law are enormously complex, too complex even for specialists and experts to parse. And the more complicated the rules, the more decisive the advantage for those who have money, access to and relationships with regulators, and ready teams of high-priced election law attorneys. Rather than trying in vain to get money out of politics, the goal should be to get politics out of money,2 to severely limit beforehand the potential influence of politics on free individuals’ personal economic decisions. In the economic sphere, the influence of politics is necessarily corruptive; that is, it corrupts by definition. Politics concerns the application of coercion or compulsion, distinguished only by its privileged access to violence. Through this, the state, the parent of monopoly, creates all other monopolies.3

The left generally contends that if we were to separate politics from economics, unbridled free market competition would allow giant multinational corporations to trample labor, befoul the environment (in particular, shared air and water), and generally dominate our day-to-day lives. Of course, the absurdity of this claim, which would seem to be so glaring, is lost on them: we never get a chance to see anything remotely like market forces (at least as defined by actual libertarians) at work because policymakers and “experts” are forever adding new layers of ill-conceived intervention, new patches aimed at correcting the problems and unintended consequences arising out of the previous interventions.4

Campaign finance reform is one such patch, another intervention that can only aggravate the problem it hopes to help fix. Technocratic progressives in both parties—for both Republicans and Democrats have long been guided by the same fundamental faith in the bureaucratic total state—have manufactured a convoluted mess of a mixed economy with a mind-boggling array of regulations, special rules and exceptions, subsidies, mandates, and bailouts. How can one reasonably be surprised when such a system is gamed and manipulated by those with power and access?5 Every intervention in the economy—beyond establishing a level playing field and an open, competitive environment through equal application of the laws and the protection of individual rights and private property—is an opportunity for political gaming, a chance for those with privileged access to the political class to stack the economic deck. But instead of unraveling the tangle of interventions, instead of pursuing a principled separation of economy and state, we hear calls for a perverse system of political and bureaucratic controls on donations to candidates and candidate-affiliated groups. Such measures are unlikely to do anything but aggravate existing corruption problems.

Wanting to “get money out of politics” seems to be a case of the desire to broadcast one’s egalitarianism, skepticism toward corporate power, and respect for fairness in American democracy. Taken seriously, such legitimate concerns counsel serious legal and policy attempts to prevent legislatures and governmental agencies from interfering with voluntary, mutually beneficial economic relationships. Reform in this direction would address directly the problems that the “get money out of politics” crowd attempts to address circuitously and ultimately ineffectively. Libertarians want to lower the stakes of the electoral game: neither the economic viability of one’s business nor her right to earn a living more generally should depend on election outcomes. Nor should certain political outcomes hold out the promise of special perks for connected corporations. Just as one’s civil rights should not depend on the vagaries of partisan politics, so too should her economic rights be protected.

It’s worth pointing out that even if the United States were to embark on the disastrous course of abolishing private property and free markets entirely, nationalizing all industries, corporate money and influence would not simply evaporate at that moment. Wealth and political power would persist, only now even further concentrated at the top of a single towering hierarchy (consider the Inner Party in 1984, or the real-life examples provided by several of the twentieth century’s totalitarian regimes). Even where such a hierarchy is nominally socialist, human beings will tend to act like human beings, incentives winning the day. The campaign finance reform left weighs form—the official names we give our social and economic arrangements and patterns of behavior—too heavily, leaving them with a blinkered view that overlooks substance. They believe that if we just say, for example, that public financing of elections creates a level playing field, then it will be so. Shifting our focus, attending not to the players who worry us (here, corporate donors), but to the rules of the game, our institutions, and the ways we channel incentives, would yield better policy results, specifically, public policy measures that take seriously the idea of separating political decisions from economic ones.