Hayek vs. Beveridge on the Welfare State: Introduction

How did F. A. Hayek’s The Road to Serfdom and Sir William Beveridge’s Social Insurance and Allied Services shape the politics of the welfare state in the United States and the United Kingdom? 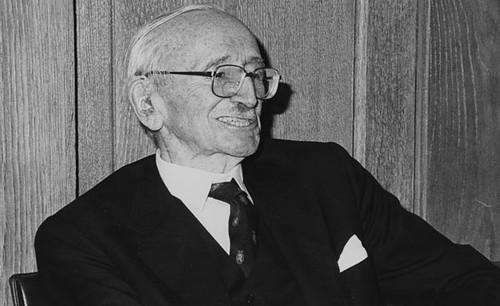 Two books written in London during World War II indelibly shaped the next eighty years of political debate over the rise of the welfare state. Sir William Beveridge’s Social Insurance and Allied Services, published in 1942, paved the way for the construction of the British welfare state by the Labour Party at the end of the war. Friedrich Hayek’s The Road to Serfdom, a trenchant critique of socialism published in 1944, fueled popular support for the rollback of the New Deal in America. Although historians recognize the importance of these two books for the history of the welfare state and in mid-twentieth century politics, they treat the books as separate documents read by different people to support opposing policy agendas. Historians ought to instead read these works as two voices in a debate over the future of British society. Beveridge and Hayek were colleagues corresponding about the issues they raised in their dueling works. The first part of this essay briefly explores the biographies of the two economists before providing a close reading of the Beveridge Report and The Road to Serfdom.

In 1931, a young Austrian economist named Friedrich Hayek delivered a series of lectures on monetary theory at the London School of Economics (LSE). Hayek then accepted an invitation from the LSE’s director, Sir William Beveridge, to join the faculty that fall. Soon after his appointment, Hayek heard other faculty and students suggest that fascist success in the German parliamentary elections of 1932 and Adolf Hitler’s rise to power in 1933 represented the triumph of capitalist reactionaries over true socialism. Indeed, William Beveridge was one of the main proponents of this viewpoint. Hayek believed that his recent emigration from Austria gave him a special insight into German politics, so he sent a short memorandum to Beveridge arguing that German National Socialism was socialist indeed. There is no indication that Beveridge responded to Hayek’s note or even read it, but a decade later, the two economists’ perspectives clashed again—this time on a transatlantic stage for a reading audience of millions.[i]

In the intervening years, Beveridge left the LSE for the British civil service. In 1941, Arthur Greenwood, the Minister without Portfolio, appointed Beveridge chair of a committee commissioned to report on post-war reconstruction possibilities. The following year, Beveridge released his report, officially entitled Social Insurance and Allied Services. In that report, Beveridge called for a revolutionary overhaul of the British system for providing welfare, pensions, and unemployment insurance. Rather than relying on a mélange of for-profit companies, non-profit charities, and local government relief efforts to provide a social safety net, Beveridge proposed creating a central state agency that would distribute benefits and collect contributions. The Beveridge Report went beyond social security, stipulating the formation of a national health service and the institution of full employment policies. The report provided a template for the post-World War II British welfare state. Throughout 1942, Beveridge publicized the report through interviews and editorials. After its release later that year, the 300-page policy report was an immediate hit, quickly selling over 600,000 copies in Great Britain and 50,000 in the United States.[ii]

In the summer of 1942, Friedrich Hayek finished the first draft of The Road to Serfdom, a sharp critique of the idea of the welfare state and socialist central planning. Hayek’s 1933 memorandum to Beveridge had expanded into a series of magazine articles that provided the basic arguments for The Road to Serfdom. The book quickly sold out two small runs in England (4,500 copies in total) when wartime paper shortages prevented further printing, but Hayek struggled to find a publisher in the United States. Macmillan, who had issued the American edition of the Beveridge report, turned down The Road to Serfdom because they felt Hayek was “a little outside the stream of much present-day thought, both here and in England.” Finally, after two other trade publishers rejected the manuscript, the University of Chicago press accepted it for publication with the expectation of selling no more than 900 copies. Within months of its release in the fall of 1944, The Road to Serfdom had sold 17,000 copies, an impressive performance, albeit one dwarfed by the sales figures for the Beveridge report. However, in April 1945 the popular magazine Reader’s Digest included a condensed, 20-page version of The Road to Serfdom as its lead article and then sold 1,000,000 copies of a longer abridged edition through its Book-of-the-Month Club. The University of Chicago Press turned Hayek’s United States book tour of small, university talks into a series of lectures and debates before audiences of thousands.[iii]

The Beveridge report and The Road to Serfdom each became bestsellers but on opposite sides of the Atlantic. Social Insurance and Allied Services greatly outperformed The Road to Serfdom in Great Britain while the inverse was true in the United States. It is astounding that two LSE economists, taking opposite positions regarding the welfare state, so perfectly captured the zeitgeist of British and American political culture in the 1940s. Beveridge, the optimist, appealed to a British population weary of war and ready for a unified social order. Hayek, the pessimist, warned an American middle class—already skeptical of the New Deal’s cost and scope—of the totalitarian threat latent in the welfare state. As a result, Britain forged a welfare state in the mid-1940s that lasted until the repeals of Margaret Thatcher four decades later. In the United States, Congress rolled back the New Deal; the welfare state was delayed for another twenty years until Lyndon Johnson’s “Great Society.” Beveridge and Hayek had clearly struck a nerve.

Historians recognize the significance of the Beveridge report and The Road to Serfdom, but they typically consider the two books in isolation. Several standard British histories of the welfare state—for example John Stevenson’s British Society, 1914-45, Derek Fraser’s The Evolution of the British Welfare State, and Bernard Harris’s The Origins of the British Welfare State—highlight the importance of the Beveridge Report in stoking popular expectations for post-war social reforms but do not mention Friedrich Hayek or The Road to Serfdom. Even those histories that do include Hayek, like Rodney Lowe’s The Welfare State in Britain since 1945, do so because of Margaret Thatcher’s wielding of Hayek in the 1980s rather than because of the economist’s significance in the debate over the welfare state in the 1940s. The American historiography on the retreat from the New Deal in the 1940s is comparatively impoverished, except for Alan Brinkley’s excellent The End of Reform, which discusses the American reception of both Beveridge and Hayek.

[i] Friedrich Hayek, The Road to Serfdom: Text and Documents, ed. Bruce Caldwell (Chicago: The University of Chicago Press, 2007): 5, 245-8. A copy of Hayek’s memorandum survives only in Hayek’s papers, not Beveridge’s.