Hayek vs. Beveridge on the Welfare State: Beveridge’s Social Insurance and Allied Services 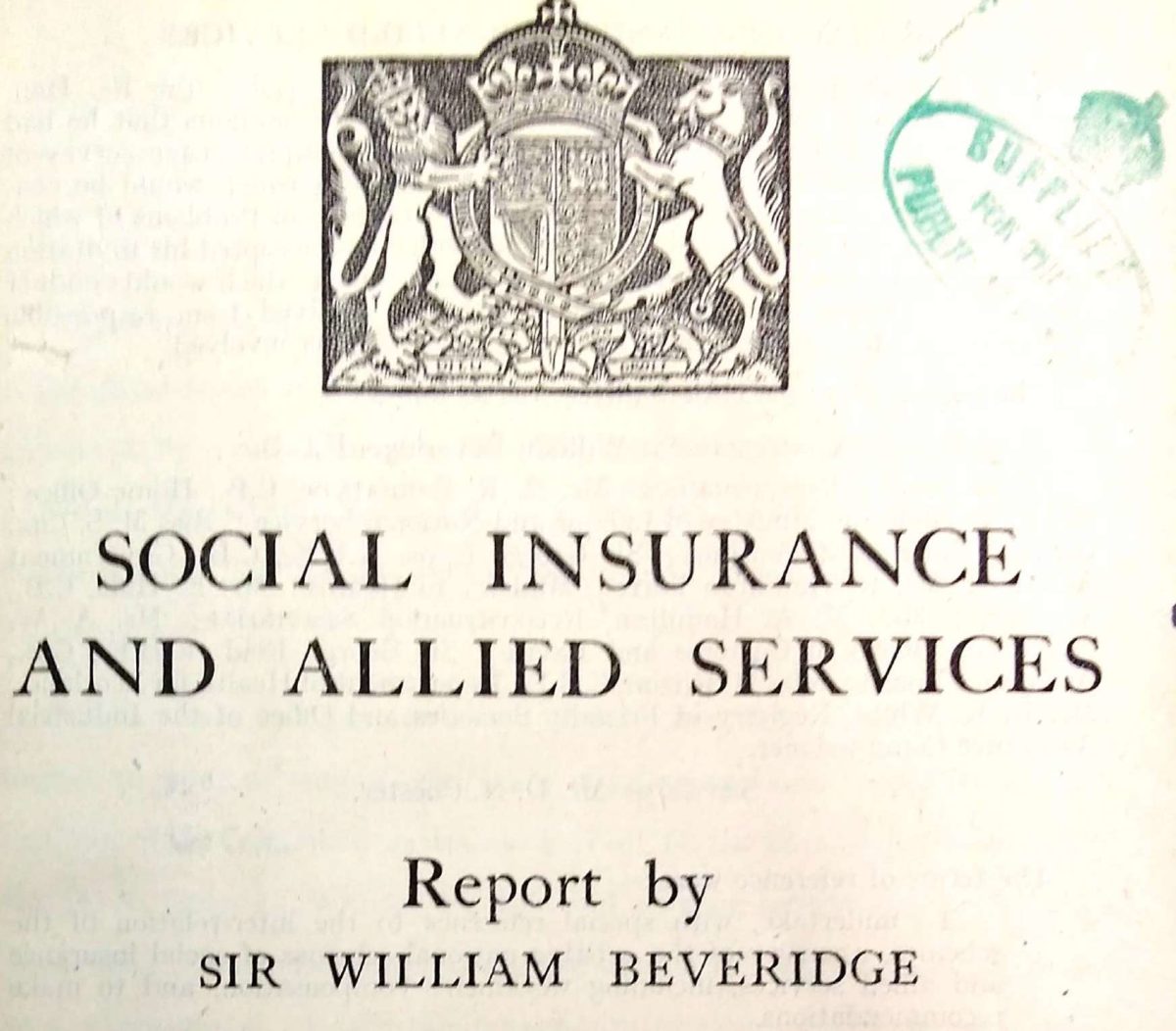 At the outset, Beveridge situated his proposal as the next, logical step for British welfare reform. He connected his plan to a long string of reforms reaching back to Queen Elizabeth’s Poor Laws in the late sixteenth century. More recently, Parliament had enacted legislation mandating workmen’s compensation, compulsory health insurance for high-risk professions, and unemployment insurance. By appealing to the history of welfare reform, Beveridge normalized his own proposals. Parliament had enacted welfare reforms in the past and should do so again. Beveridge argued that the current decentralized system, while admirable in its desire to help the unemployed, was unable to guarantee coverage to all in an efficient manner. It was a “complex of disconnected administrative organs, proceeding on different principles, doing invaluable service but at a cost in money and trouble…for which there is no justification.” Throughout his report, Beveridge appealed to the potential cost savings of centralized control and dedicated an appendix to showing how state control would lead to significant savings in administrative costs, primarily because of the reduced expense in collecting premiums through employers. It was a way of responding to critics who worried about the cost of instituting the welfare state. Beveridge admitted that the initial outlay would be expensive, but he argued that the administrative efficiency of the Ministry of Social Security ensured that a greater proportion of contributions would actually go to beneficiaries.[i]

Beveridge was also concerned about the competitive nature of insurance provision. Under the “Approved Society System”—the old network of government-sanctioned, for-profit insurance companies that sold compulsory life and disability insurance—providers had a “conflict of interests” caused by the dual obligation of distributing benefits and returning a profit. A state agency would not face the same competitive market pressures and could focus solely on providing the guaranteed benefits and collecting stipulated contributions, leaving any shortfall to Parliament. Beveridge labeled his program “social insurance” because it operated on the contributory principle—“insurance”—and because it mandated a common pool for contributions—“social.” It was compulsory, but it had a moral basis because it required “that men stand together with their fellows.” Beveridge argued that social provision was superior to private provision because the state would not have to adjust insurance premiums to cover actuarial risks. Instead, it could establish a single rate for all English citizens. Furthermore, the state, unlike private insurers, possessed the power of taxation. It did not need to hold a large fiscal reserve in case future predictions proved inaccurate.[ii]

Beveridge outlined three guiding principles for social insurance. First, it was to be revolutionary. He acknowledged the value of lessons learned through experience, but he wanted to avoid the sectional interests created through prior piecemeal efforts. Local government agencies, trade associations, and aid societies all had a stake in preventing welfare provision from becoming a national system; they wanted to protect their own existence.

Second, Beveridge noted that his plan targeted just one of the “five giants on the road.” Those five giants—Want, Disease, Ignorance, Squalor, and Idleness—each needed a solution from the welfare state. Beveridge’s report sought to minimize the threat of want by mitigating unemployment, the primary contributor to poverty, but he stipulated that the government would also provide national healthcare, employment guarantees, and allowances for children. Beveridge calculated levels of benefits and contributions on the assumption that citizens would not have to pay for their healthcare, that they would have steady income from which to contribute, and that allowances would defray the additional expenses of children.

Third, social security required cooperation between the state and the individual. The state offered its citizens security from want, but it still needed individuals to act with initiative. Beveridge did not want the welfare state to sap individuals’ incentives to work hard and innovate. Thus, Beveridge’s plan established a national minimum income but left room for private gain above that minimum. He believed that the welfare state, if “properly designed, controlled, and financed,” would not have a “depressing effect on incentive.”[iii]

Beveridge had declared a “British revolution” and he intended that revolution to benefit women as well as men. The Beveridge report recognized the “vital though unpaid” work performed by housewives. The prior system had classified married women as dependents of their husbands and did not allow them to claim unemployment benefits. Beveridge’s plan treated wives and husbands as a team performing “equally essential” labor. A married man paid a higher contribution than a single man did but also received greater unemployment benefits. As a whole, Beveridge believed that his plan put a “premium on marriage.” He was concerned about the low British birthrate and hoped to encourage childbearing through provisions for housewives and children. “In the next thirty years housewives as mothers have vital work to do in ensuring the adequate continuance of the British race and of British ideals in the world.” Nevertheless, Beveridge’s promise of a revolution fell short because his plan operated on the assumption that women should be married and should raise as many children as possible. During World War II, record numbers of women took jobs outside the home, often in munitions factories and on other defense projects. Beveridge wanted to return these women to their “proper” place, the home. Married women who worked outside the home received a reduced unemployment benefit because they could depend on the provision of their husbands; there was no such reduction for unemployed, married men.[iv]

At the end of the report, Beveridge included a list of potential objections to his plan and his responses. He anticipated critics faulting the plan for being overly ambitious for a time of war or, conversely, complaining that it was not ambitious enough. However, the first objection that he responded to was the question of whether security undermined “initiative, adventure, [and] personal responsibility.” Beveridge countered by noting that the plan guaranteed a national minimum, not a maximum. The people would be free to “win for themselves something above the national minimum,” “satisfying new and higher needs than bare physical needs.” Beveridge was not proposing a fully socialist system in which a central syndicate or board would set wages and redistribute all wealth, but he did put forward a socialist vision of the elimination of poverty. In a restatement of Marx’s famous credo, Beveridge wrote, “The aim of the Plan for Social Security is to abolish want by ensuring that every citizen willing to serve according to his powers has at all times an income sufficient to meet his responsibilities.” The Beveridge report offered a hybridized system combining socialist cooperation and capitalist acquisitiveness.[v]

[i] William Beveridge, Social Insurance and Allied Services (New York: Agathon Press, 1969): 6, 15. The greatest initial expense, estimated at 86 million pounds the first year, came from retirement pensions for workers who had not contributed to the new system but who would still receive payouts; Beveridge included an extended discussion of the history of welfare reform in Great Britain in Appendix B; Appendix E calculates the administrative costs of the old system and projects the expenses under Beveridge’s proposed system.

[ii] Ibid., 12-13, 29-30. Beveridge’s belief that public, social insurance does not require financial reserves because of the taxing power of the state will soon be tested in the United States. The US Social Security Administration did not forecast the precipitous increase in average life expectancy and the current rate of contributions is insufficient to cover future outlays.

[iii] Ibid., 6-7, 167. Beveridge’s “five giants” are reminiscent of Franklin Roosevelt’s “Four Freedoms.” In a speech on January 6, 1941, Roosevelt had proclaimed Americans’ right to freedom of speech and association, of worship, from want, and from fear.

[iv] Ibid., 49, 53. Beveridge’s plan may have been counterproductive and discouraged marriage. He had noted the potential objection that women would cohabitate without marrying in order to take advantage of the increased unemployment benefits, but Beveridge argued that the widowhood benefits outweighed the advantages of remaining a legal fiction of singleness. The precipitous decline of rates of marriage in post-war Britain may suggest that Beveridge’s careful balancing act failed.