Hayek vs. Beveridge on the Welfare State: In Dialogue

Beveridge’s and Hayek’s dispute over expert control of economic and social policy was a manifestation of a much deeper disagreement, known as the “Knowledge Problem”. 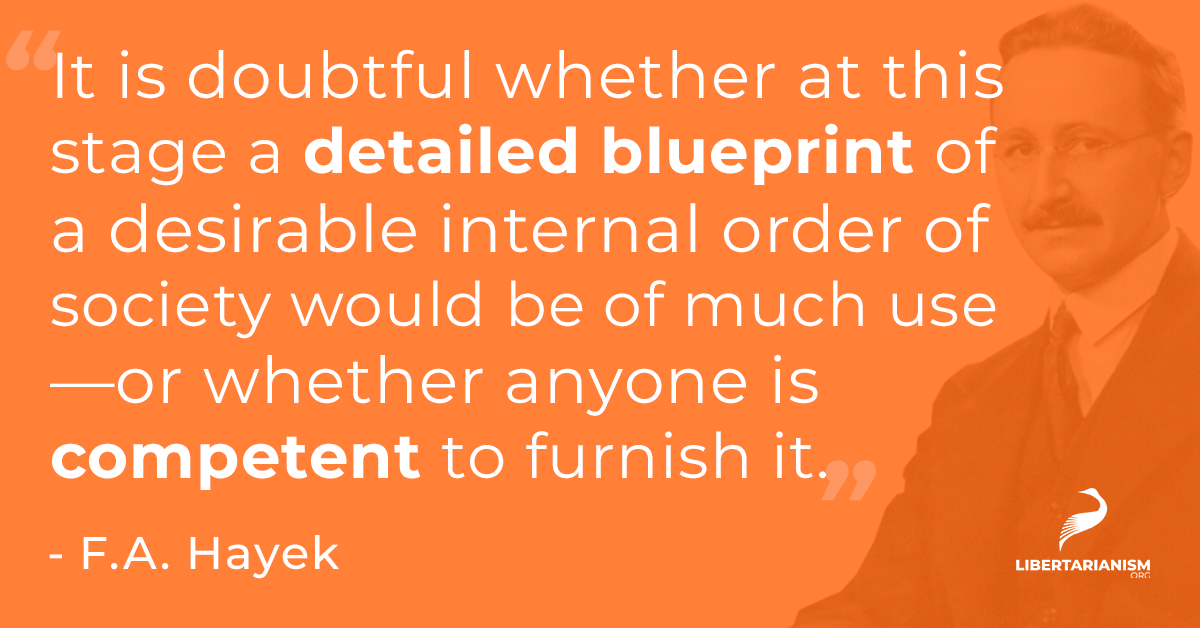 At the end of The Road to Serfdom, Hayek took a direct jab at the Beveridge report by writing, “It is doubtful whether at this stage a detailed blueprint of a desirable internal order of society would be of much use—or whether anyone is competent to furnish it.” The two economists certainly had different views of the welfare state. Beveridge thought that private competition was the cancer at the root of the voluntary insurance system; Hayek believed it to be the last bulwark against totalitarianism. Beveridge believed that the state could create social security without damaging individual incentive; Hayek thought it would stultify British innovation and entrepreneurship. The Beveridge report placed great trust in the capacity of impartial experts to administer welfare; Hayek labeled them power-hungry autocrats.[i]

Beveridge’s and Hayek’s dispute over expert control of economic and social policy was a manifestation of a much deeper disagreement, something that Hayek called “the Knowledge Problem.” By this, Hayek meant that no single person, or even group of people, could possess the knowledge contained within an entire society. “The knowledge of the circumstances of which we must make use never exists in concentrated or integrated form but solely as the dispersed bits of incomplete knowledge which all the separate individuals possess.” Socialists, according to Hayek, suffered from “the mistaken assumption that all knowledge can be collected in one mind.” Hayek had attacked the fundamental concept of central planning, the belief that an enlightened bureaucrat could gather all pertinent information, consult with experts, and make an informed decision.[ii]

Beveridge, like all central planners, believed that he could rationalize and streamline the social insurance system by depending upon information provided by “impartial expert authorities.” He anticipated critics, like Hayek, who questioned his forecasts and he acknowledged the difficulties that the project faced. After all, it was “impossible today to forecast with assurance the level of prices after the war.” Even what constituted “reasonable human subsistence is to some extent a matter of judgment.” Beveridge’s calculations of how much households spent each month on food, clothing, and fuel became quite complicated and he was forced to make recommendations based on what the average household needed without making adjustments for regional and local variations in the cost of living.[iii]

The greatest controversy between members of Beveridge’s committee arose over the thorny issue of rent. Beveridge noted that the cost of rent differed “markedly between London, the rest of England and Scotland, and between industrial and agricultural households.” According to the data given to Beveridge by Seebohm Rowntree, the average household in Scotland spent little more than half as much on rent as the average household in London (8.2 shillings against 15.7). Rowntree himself recommended giving claimants their actual rent, a suggestion heartily seconded by committee member Muriel Ritson who “complained that it would be grossly unfair to low-paid, low-rent areas like Scotland, and would mean that the contributions of poor highland crofters would subsidize the rents of affluent workers in the South-East.” Beveridge considered their recommendation at length in the report, but he ultimately discarded their advice because “any regional or occupational differentiation of benefits and contributions…would raise some difficulties in administration.” Instead, Beveridge went with a fixed-rate benefit of 10 shillings a week per household. Without elaborate administrative mechanisms, it was simply impracticable to control for regional variations in rent, let alone attempt to compensate every individual household for the exact cost.[iv]

The rent controversy is emblematic of Beveridge’s encounters with the Knowledge Problem. In the end, he had to acknowledge the limits of centralized knowledge. Even the otherwise sympathetic Nicholas Timmins faults “the essential arbitrariness of the exercise” and notes Beveridge’s frequent use of phrases such as “It is reasonable…” or “It is suggested…”  There are hints that Beveridge himself recognized the Knowledge Problem. While discussing the transfer of the functions of local authorities to the new Ministry of Social Security, he wrote, “It is clear that the administration of the Ministry of Social Security must be decentralized so that its local officers are in intimate touch with the problems and circumstances in their localities.” Beveridge hoped that such would be possible “without making these officials servants of, and subject to the control of, the Local Authority.” His plan arranged for “local administration by local officials of a Central Department.” Yet immediately after asserting the desirability of decentralized or “intimate” knowledge, Beveridge concluded, “It is neither desirable for the strength of local democracy…nor compatible with a national minimum and a national Plan of Social Security that people should be given assistance according to a scale and conditions which vary from place to place.” Beveridge desired two contradictory things: local knowledge and central planning.[v]

Yet the Knowledge Problem is a double-edged sword that cuts against Hayek as well. For although he opposed state-run central planning, Hayek also explicitly repudiated laissez-faire anti-statism. He wrote, “Probably nothing has done so much harm to the liberal cause as the wooden insistence of some liberals on certain rough rules of thumb, above all the principle of laissez faire.” While Hayek valued competition and criticized central planning for limiting competition, he acknowledged a legitimate role for the state in creating “a legal system designed both to preserve competition and to make it operate as beneficially as possible.” Workplace regulations, road maintenance, and pollution all required “some substitute for the regulation by the price mechanism.” Thus, Hayek defended the rule-making power of the state even while objecting to central planning. Yet the Knowledge Problem applies to both rule-making and central planning. According to the principle of the division of knowledge, there is no more reason to trust the ability of centralized government to set reasonable rules than there is to think it can effectively plan social security.[vi]

Hayek leveled another accusation at central planners that applies to the Beveridge Report. Hayek believed that socialism and democracy were incompatible, that “the inability of democratic assemblies to carry out what seems to be a clear mandate of the people will inevitably cause dissatisfaction with democratic institutions.” Hayek quoted from the work of fellow LSE professor Harold Laski, who complained about the inability of Parliament to pass socialist legislation and openly asked, “Whether in a period of transition to Socialism, a Labour Government can risk the overthrow of its measures as a result of the next general election.” What Hayek really feared was that dissatisfaction with democratic institutions would lead to “the delegation of particular technical tasks to separate bodies.” Efficiency would require that planning “must be taken out of politics and placed in the hands of experts—permanent officials or independent autonomous bodies.” These independent experts would not be directly accountable to the people, nor, often, even to the assemblies that created them in the first place.[vii]

He was disturbed by what he believed was the growing trend for politicians to act, not as individual representatives, nor even as members of a party, but as docile instruments of a particular faction or class. This suspicion of popular politics was reinforced by his personal experience of working with distress committees in East London—by the ‘costly red tape…lucrative contracts to local tenderers and soft jobs to local workmen’, and by the ignorance and ineptitude which he perceived in the vast majority of local councilors and guardians.

In response, Beveridge “repeatedly advocated greater central control of local authorities [and] more power for non-elected ‘experts’.” He never explained precisely why national authorities would be less prone to corruption than local authorities would, but it can be surmised that he thought that national experts would be removed from the influence of sectional interests. Of course, sectional interests were often a result of sincerely held differences in political philosophy. Expert consensus would come at the expense of both open political discourse and democratic oversight.[viii]

While Hayek’s criticism of Beveridge’s undemocratic beliefs carries some weight, Hayek himself was not a committed democrat. At the end of the chapter, “Planning and Democracy,” in which he attacks the undemocratic ways of central planners, Hayek wrote, “We have no intention, however, of making a fetish of democracy. It may well be that our generation talks and thinks too much of democracy and too little of the values which it serves.” Hayek believed that democracy was a means to an end, that of “safeguarding internal peace and individual freedom,” but even democracy could become tyrannical. “It is at least conceivable that under the government of a very homogeneous and doctrinaire majority, democratic government might be as oppressive as the worst dictatorship.” Nevertheless, both Beveridge and Hayek shared a conditional commitment to democratic government.[ix]

[i] Ibid., 237. Although The Road to Serfdom was not published until fall 1944, Hayek began submitting it to publishers in the summer of 1942 during the well-publicized lead up to the release of the Beveridge report.

[v] Nicholas Timmins, The Five Giants: A Biography of the Welfare State (London: Fontana Press, 1995): 52-3; Beveridge, 67; Elinor Ostrom won the Nobel Prize for Economics in 2009—the first woman to do so—for her work on how common environmental resources are better conserved by local cooperatives and communities than by centralized, state agencies. I give Ostrom as an example simply to note that the division of knowledge has become a widely recognized principle in economics and is not identified primarily with the Right as it was in the 1940s.