Fourth-wave feminism must be classically liberal to win. 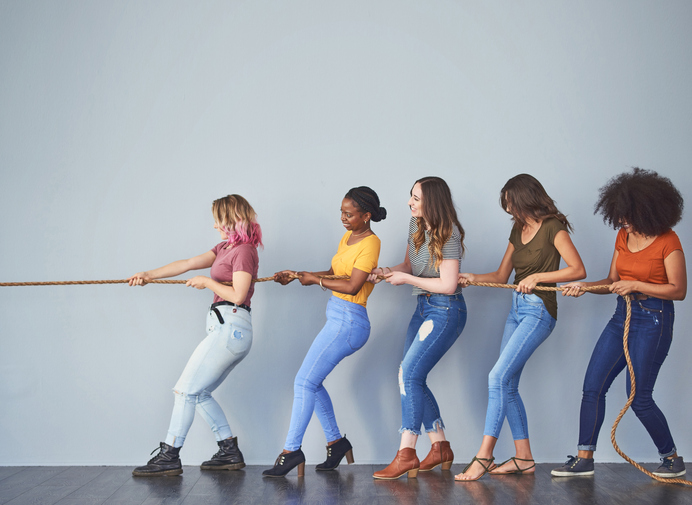 Americans tend to talk about feminism as a series of chronological and generational “waves,” but this obscures major differences between feminist factions within eras and the recurrence of ideological battles between them over time. The proper role of the government in promoting equality, whether to define equality around opportunities or outcomes, and policies regarding parenting, labor, and sex have long divided U.S. feminists.

At times—generally when government mandates directly deprive women of equal status in very obvious ways—it has been relatively easy for feminists on all sides of these divides to come together in common cause. Less so when the agenda goes beyond ending discriminatory policies to propping up laws that advantage women over men, or laws that restrict liberty broadly for the sake of creating some social conditions supposedly necessary for women to thrive.

Today, as western feminism enters what some might call its “fourth wave,” libertarian feminists can play an important role in reorienting the movement toward freedom, individual rights, and empowering people against the state. But first, those with classically liberal leanings must stop seeing socialism, Progressivism, and authoritarianism as inherent features of movements for sex and gender equality.

The 1993 essay touches on the same themes as Taylor’s first book, Reclaiming the Mainstream: Individualist Feminism Reconsidered (1992). “Each time feminism came on the scene, it was the message of individualism that captured the imagination of women,” she writes in the latter.

Yet while “the appeal of non-coercive, non-governmental feminism has always reached a wider audience than collectivism has, it is often collectivism that gets media attention. And various feminist theorists (and attackers of feminism) have been happy to say that such collectivists speak for the only true feminism,” suggested Taylor back then.

At a time when feminism’s frontiers were even more tightly policed than they are today, Taylor relied on historical example to make a case for the legitimacy of libertarian feminists in the late 20th Century. Working through groups like Feminists for Free Expression (which Taylor co-founded) and the Association of Libertarian Feminists, Taylor and her cohort saw some great successes over the course of the 1990s and the early aughts. But in several key realms, their brand of feminism has been backsliding since then.

It’s time we reclaim a place for it in mainstream feminist discourse and within the libertarian movement.

Many “First Wave” American feminists came to that movement from fighting for the abolition of slavery. These 19th century activists—women and men—worked to improve women’s legal and social position using a natural rights framework. They sought an end to state-mandated sex discrimination in realms like voting, marriage contracts, and property rights, with measuable success.

Come the first few decades of the 20th Century, however, and “classical liberalism had been modified by progressivism and so had feminism,” noted Taylor. By the time (white) women in America were granted the right to vote, in 1919, prominent feminist voices were clashing over whether this newly-earned electoral power should be used “to push for special-interest legislation or legal equality,” she pointed out.

Over the next few decades, women’s rights campaigners teamed up with Progressives, socialists, religious conservatives, and others pushing for alcohol prohibition, sex-based labor restrictions, anti-prostitution laws, and other state interventions supposedly necessary for women’s good. Meanwhile, membership in dedicated women’s groups dwindled, as organized feminist activism was subsumed into other political and social movements.

Many prominent feminists of the era promoted an “angel in the house” feminism that conditioned women’s rights on their supposedly superior talents for morality, empathy, and matters of home and hearth—a perch that left little room for the concerns of women who fell outside white, heterosexual, middle-class, or Christian respectability bounds.

Some state-wary feminists were still active, of course (and a number of equality-minded women writers of this period would become influential in the early U.S. libertarian movement), just as black women, gay women, transgender women and others outside the progressive feminist mainstream were performing resistance and seeking progress in their own ways and in their own communities. Yet little of this occurred under the broader umbrella of women’s rights or organized feminism. And little, if any, of it permeated mass media or wider cultural consciousness.

Flash forward to the 1960s, however, and the first stirrings of the “Second Wave” feminist movement were grounded in individual rights and classical liberalism. This also remained the case into the 1970s, suggested Taylor. “Consciousness raising was a profoundly individualistic activity, and the political issues that gained wide adherence were the reproductive rights to birth control and abortion, and the Equal Rights Amendment, which (at least in its initial support) was a classical liberal restraint on government,” she wrote.

Many of the significant advances made by this cohort were cultural or social, not tied to government. And, again, “women’s liberation” captured widespread attention and allyship among disparate audiences. But given a little time, the classical liberal strain in feminism fell behind forces fighting for new sorts of protective labor laws, declaring war on pornography, and pushing particular lifestyle choices as the only way to achieve gender equality.

By the end of the 20th century, mainstream feminism was dominated by “a left-wing critique of American society, mistrust of individual liberty, and the belief that regulation of sexist behavior and language was essential to achieving equality,” wrote Wendy McElroy in Liberty for Women: Freedom and Feminism in the 21st Century (2002). Often, these “radical” feminists found common ground with values groups and social conservatives who also aimed to use the state to impose their version of good on everyone.

Although they don’t always grab headlines like collectivist feminists, “There are feminists today,” wrote Taylor in 1993, “who advocate noncoercive, nonlegislative change in society,” adding further that there were “even more women who share [libertarian feminist] ideals without calling themselves feminists—because the media focus on those within the spectrum of feminism who want more laws: either economic legislation or laws against pornography.”

This should not sound foreign to anyone paying attention to feminist issues and coverage today. But between the late ’80s and now, what folks like Taylor and McElroy called “individualist feminism” would once again cause a little ruckus.

A less infantilizing, more accessible, and more sex-positive feminism was gaining traction, with less hostility to individual women making their own lifestyle choices and less qualms about pop culture, private enterprise, and more.

In the 1990s, “American feminism experienced cataclysmic changes,” suggests Camille Paglia in “Libertarian Feminism in the Twenty-first Century,” her contribution to Liberty for Women. The 2002 essay collection (edited by McElroy) features an array of “Third Wave” feminists on issues such as censorship, sex work, discrimination, and women’s health care. There’s cautious optimism throughout, hope that feminism’s worst days may have passed.

“My wing of pro-sex feminism, which was ostracized and silenced through the long period ruled by anti-pornography activists such as Andrea Dworkin and Catharine MacKinnon, made a stunning resurgence,” wrote Paglia. In addition, Paglia no longer saw feminism’s mainstream fueled by an opposition to fashion, rock music, sex, science, or free markets.

With the demise of the Soviet Union and “fashionable Marxism,” noted Paglia, “capitalism’s central role in the modern emancipation of women is starting to be seen.”

“Most of the positions for which I was pilloried when I came on the scene a decade ago […] are now scarcely controversial at all, so sweeping has been the victory of libertarian feminism, which is in tune with a younger, sassier generation of feminists,” Paglia wrote in 2002.

Indeed, younger feminists were helping shift priorities within organized feminist activism and seizing whatever cheap or new communications mediums they could to spread their ideas without gatekeeping. Meanwhile, classical liberal feminists of all ages were finding themselves less outcast, commanding attention in academic, media, and policy spheres.

The U.K. faced a somewhat similar feminist trajectory over the 20th Century. The first “death” of libertarian feminism in Britain took place somewhere between 1900 and 1920, suggested Johanna Faust and Chris R. Tame in a 1987 pamphlet from The Libertarian Alliance and the British Association of Libertarian Feminists. “From that time on libertarian feminism suffered the same decline as libertarianism and classical liberalism in general—until their contemporary rebirth.”

In the same pamphlet, historian Stephen Davies offers a history of waxing and waning libertarian tides within mainstream British feminism. While “the connection of feminism to socialism may appear inevitable,” concludes Davies, “history has shown that this is not the case.”

When the sort of illiberal feminism that favors social engineering through the law is dominant, libertarian feminists—and the much larger faction of ordinary people who believe in basic feminist values—wind up turning away from organized feminist activism and causes. This, in turn, allows more space for radical, carceral, collectivist, and all-around anti-liberty factions to anoint themselves the spokespersons for all women’s issues, the gatekeepers of good gender politics, and the arbiters of true feminism.

Both feminism’s outside image and inner parameters shift in response to changes in the classical liberal/collectivist or libertarian/authoritarian orientation of the movement.

Taylor argued something like this back in 1992. “The individualist impulse brings women together,” she suggests in Reclaiming the Mainstream. But “as the aims of the movement shift, from a stress on individualism, social cooperation, and negative rights to a stress on collectivism (not just any ‘collective’ action, but in the sense of using government power) and positive rights, the movement becomes marginal and ineffective.”

Much of the cultural territory captured for classical liberal feminism in Taylor’s time has since been lost again. The reasons why are complex, and I’ll leave them for another time. For now, let’s just say it’s understandable why there are many who say libertarians and classical liberals should simply cede any claim to feminism and move on.

But they’re wrong. The struggle for a more freedom-friendly feminism—one emphasizing natural rights, empowering anti-carceral actions, and centered on actual equality under the law (“equality of permission,” as author and historian Deirdre McCloskey puts it)—is one with deep roots among modern feminists. And it is too important to give up now.

Whether they accept or reject the “feminist” label, most Americans believe in political equality for everyone, regardless of sex, gender, or sexual orientation. Most Americans want the legal and cultural room to organize their own families, education, professional ambitions, reproductive decisions, sexuality, social lives, and self care as they see fit—and can, with the right pitch, be persuaded to let others do the same.

There is great potential for a classical liberal feminism’s resurgence. Yet libertarians are often our own worst enemies when it comes to the kind of coalition-building that could actually help reclaim feminism for liberty in the 21st century.

While 21st Century libertarians carry on the classical liberal tradition of earlier feminist eras, many speak the language of anti-feminism—leading potential allies to conclude (not inexplicably) that libertarianism as a philosophy is sexist and offers no sound solutions or perspectives when it comes to women’s and gender issues. This also creates room for today’s carceral, collectivist, and illiberal feminists to present themselves as the only path forward for those who care about equality.

Plus, as Taylor observed (in so many words), “normies” tend to tune out when socialists and scolds dominate public-facing feminism. And people from all sorts of marginalized groups wind up pushed out and/or turned off when feminism’s gatekeepers take a “thick” view (for example, saying that supporting a particular political candidate, promoting certain trendy causes, or adopting the right rhetorical style are required in order to call oneself a feminist).

If history is any guide, the sort of diverse, pluralistic, and populist coalition that must be a part of any effective modern feminist movement can only be sustained by a radical commitment to freedom and individual rights.

Elizabeth Nolan Brown is a senior editor at Reason magazine and the co-founder of Feminists for Liberty. Her writing has also appeared in publications such as The New York Times, The Daily Beast, Buzzfeed, Playboy, Politico, Fox News and Los Angeles Times.